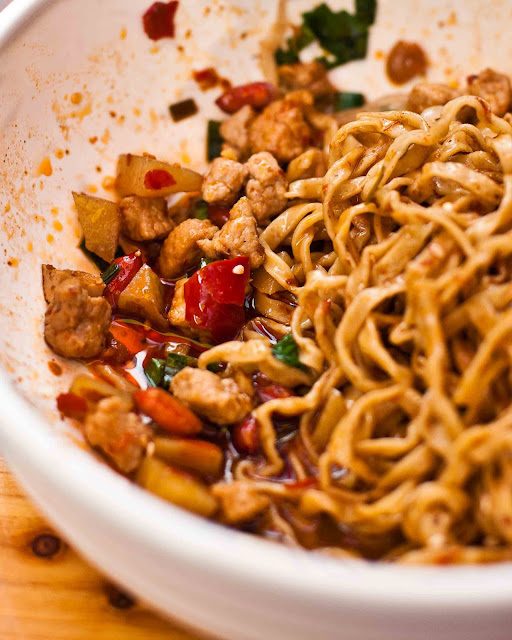 It's the Holy Grail for foodies, that rarely attained combination of a tasty, memorable, inexpensive meal in a place that no-one else seems to have discovered except you and the local neighourhood customers, who all want to keep it that way. Sorry about that.

Thanks to a Sunday afternoon walk with Sue Anne Tay (who owns the great Shanghai Street Stories website and knows the old neighbourhood of Hongkou like the back of her hand) I was introduced to this noodle shop on Kunshan Lu, where they served the best ban mian, noodles mixed with sauce. On the day we visited the taste of their Zhenjiang noodles blew me away with spicy complexity, and when Sue Anne told me they make fresh noodles every day on the strange wooden contraption at the front of the shop with a long green bamboo pole attached, I wanted to see it.

Sadly, that hot afternoon the noodle-maker had finished for the day and the other staff were taking advantage of the lull between lunch and dinner to drink beers and nap on the wooden platform above the kitchen, shielded only by the overhang of the banner menu. There was no noodle making to be seen.

So yesterday I returned, and wouldn't you know it, I arrived mid-batch just as the noodle maker was bouncing up and down on the bamboo pole like a teeter-totter, squeaking like mad. 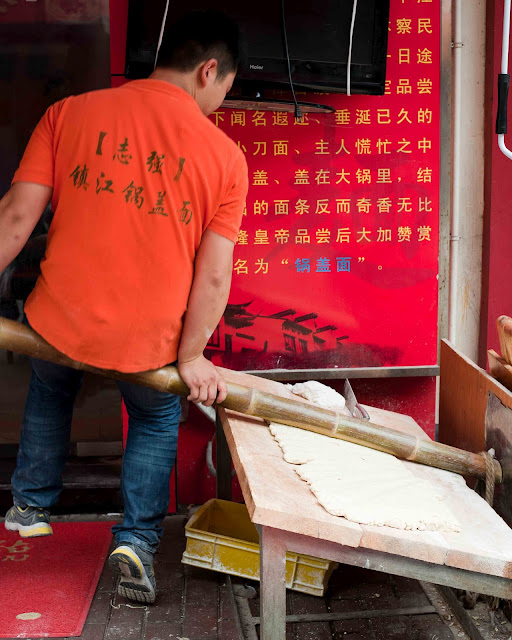 What was it all about? The noodle dough is made from buckwheat flour, and just like the Japanese version, soba, the dough needs to be rolled with a heavy hand and layered before being cut with a very sharp knife into ribbon-like noodles. Doing it this way with a bamboo pole seems like way more fun than sweating away with a rolling pin, and the noodle maker bounced up and down for an hour until all the dough had been worked. 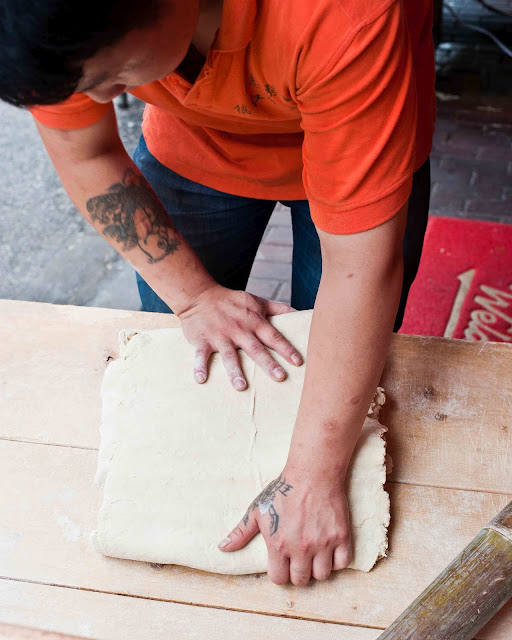 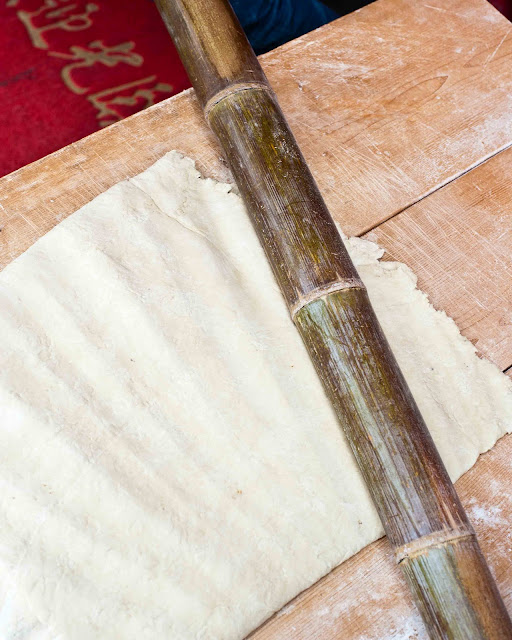 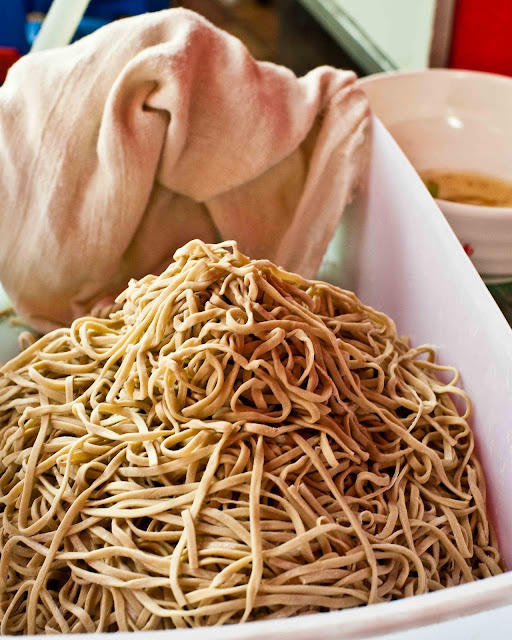 Once the noodles are cut, they're cooked a handful at a time in a boiling pot of water, then served one of two ways - as tang mian - soup noodles with broth, or ban mian - mixed with a combination of sauces. 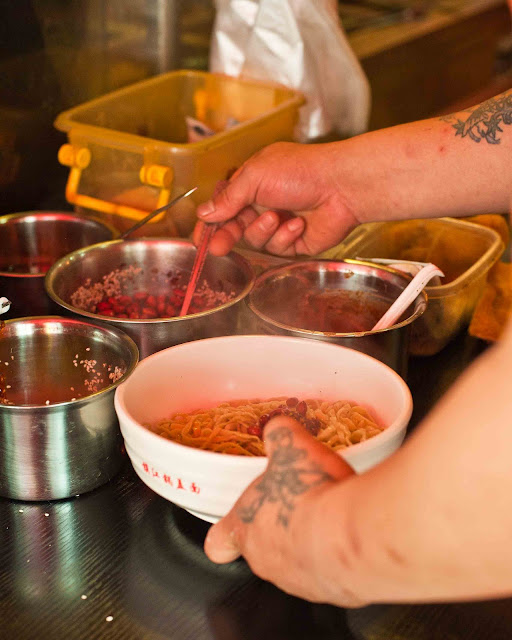 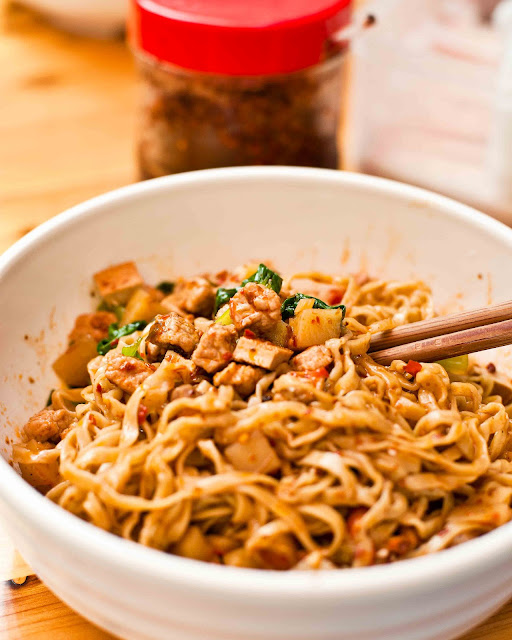 I still haven't explained the quirky name of the noodle shop, Zhenjiang guo gai mian 镇江锅盖面, or saucepan lid noodles. Do you remember Emperor Qianlong? He lived about three hundred years ago and according to my limited knowledge did nothing much but travel up and down the countryside coaxing unexpectedly amazing cooking out of humble circumstances.

Then there's this one, Saucepan Lid Noodles.

The story goes that Emperor Qianlong stopped on his horse one day at the house of a peasant in Zhenjiang town, and asked for some local buckwheat noodles. In his embarrassment and consternation at having the emperor suddenly drop in on him, the peasant got completely flustered and tried to put the small saucepan lid on the big pot of noodles, and it promptly fell in. To his amazement the noodles tasted better than before and the emperor, impressed, bestowed the name of guō gài miàn 锅盖面 or saucepan lid noodles.

I like the sound of this Emperor Qianlong. He just rides his horse everywhere, has peasants rustle up ordinary food (which turns extraordinary under his imperial influence), then bestows special names to make the peasants feel better for dropping lids in cooking pots. I think I need to find out what other dishes he's been involved in and taste those.

I quite fancy myself as a modern day Emperor Qianlong you know, roaming the countryside to bring you great noodles with interesting names. Just without the horse. And the mastery of spoken Chinese. And the robes. 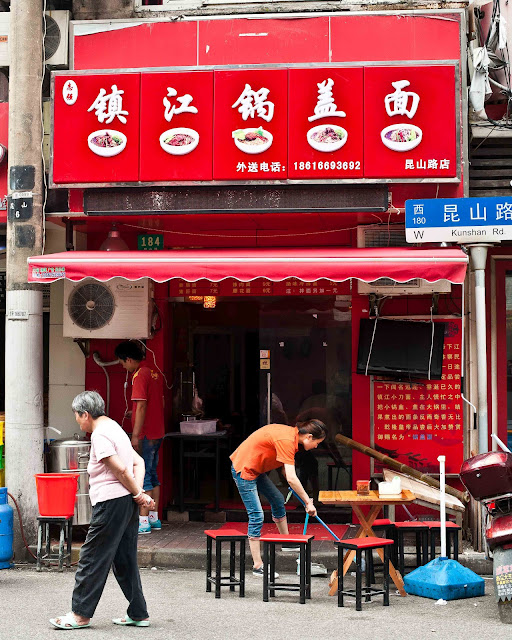 Open 7 days for lunch and dinner