The Disappearing Houses of Hongkou 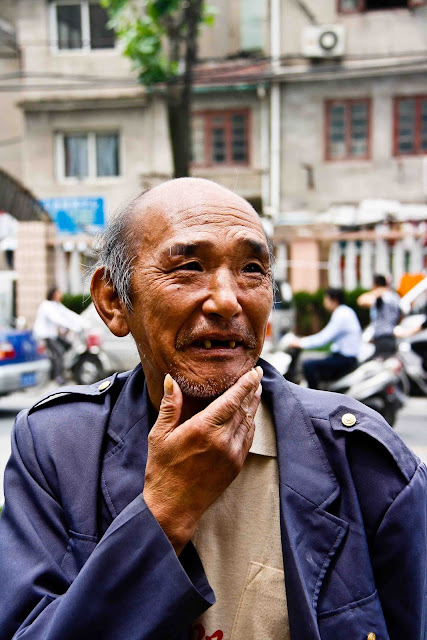 Imagine you have lived all your life in a tiny laneway in Shanghai, grown up with the same group of friends and neighbours, lived alongside the births, deaths, marriages, divorces, tragedies, triumphs and joys all happening within a few short steps of your front door. Until, that is, it's decided that your home will be bulldozed to make way for a tall, modern apartment block you won't be able to afford to live in. For this old gentleman it's just sad and confusing.
It's a common story, not just in Shanghai but all over China, where the need for high-rises to accommodate the growing tide of people moving from the country to the city, and the relentless pace of modernisation overtake all else. The old neighbourhoods are all going, torn down block by block, and the residents are being compensated and offered accommodation elsewhere, usually much further toward the city fringes. Some choose to take up the offer of a brand new apartment at a heavily subsidised price, some choose to take the monetary compensation and move elsewhere, but in every case, there is loss to bear. Loss of your home and familiar surrounds, loss of your neighbours, loss of your community. 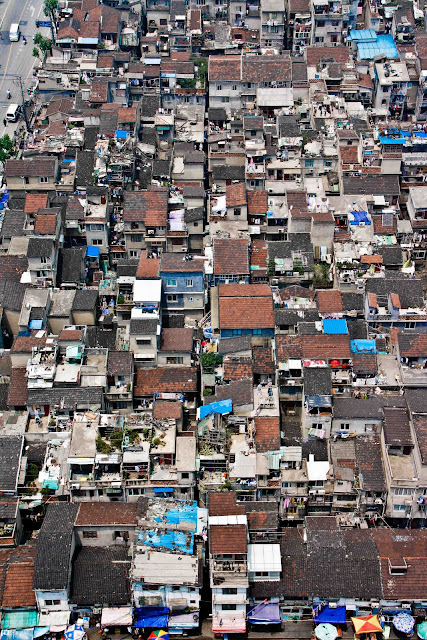 This whole community - soon to be gone.
Lest you think I'm being nostalgic, let me set you straight - these old lanes house some of the most decrepit, dangerous and unhygenic dwellings in the city. Tiny, dark, dank, dripping alleyways separate houses by the width of two people standing shoulder to shoulder, illegal wiring sprouts from every post like wild black ivy, crawling over every wall and through every window. Homes rarely have indoor plumbing, and residents shuffle back and forth to the public facilities to empty their chamber pots. Illegal house extensions encroach in every possible direction from the original dwelling - upwards, backwards, sideways, cantilevered out over the laneway, crammed into the spaces between houses, and thrusting upwards through the roof. 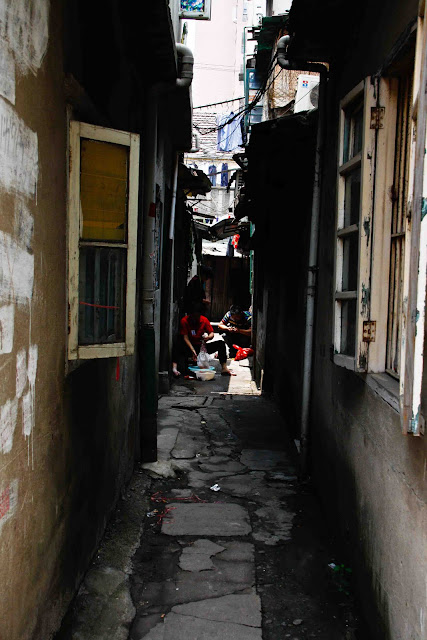 A typical laneway, dark even at midday.

Yesterday I had the rare opportuity to visit and photograph a neighbourhood where demolition is imminent - not months or even weeks away, but days away. I expected to find empty rooms, piles of discarded rubbish, and mounds of cardboard boxes. Instead, what I saw was life being lived one hundred percent to the fullest, right up to the very last minute. An outdoor wet market was in full swing, everyone buying their daily supplies of fruit, vegetables, fish and chicken, and an enormous indoor wet market was also thriving. Washing had been hung out to dry after three days of heavy rain, and in short, there was very little sign of anyone going anywhere. But in the quieter corners, there was a heavy sense of finality. The residents I spoke to said they planned to stay until forced to go, despite this, they seemed stoically resigned to moving out, and moving on.

Today I want to show you the lanes themselves, and tomorrow, the wet markets and their vendors. 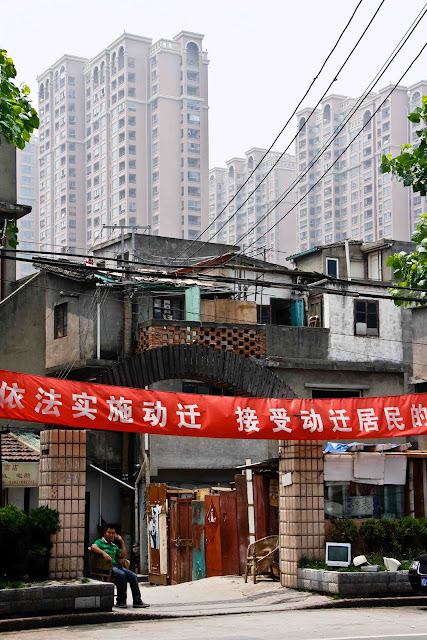 'This change will be implemented according to the law. Accept the relocation, residents of...' 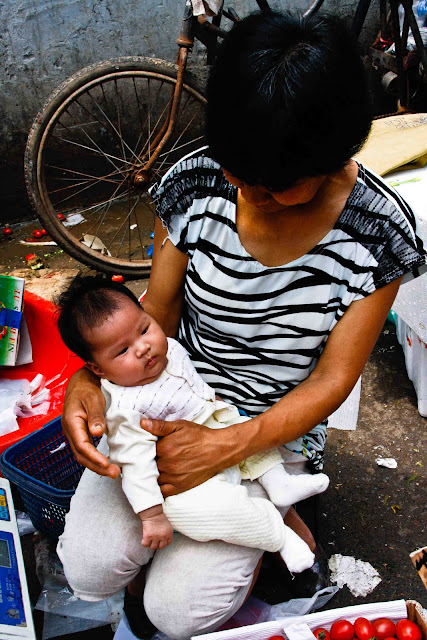 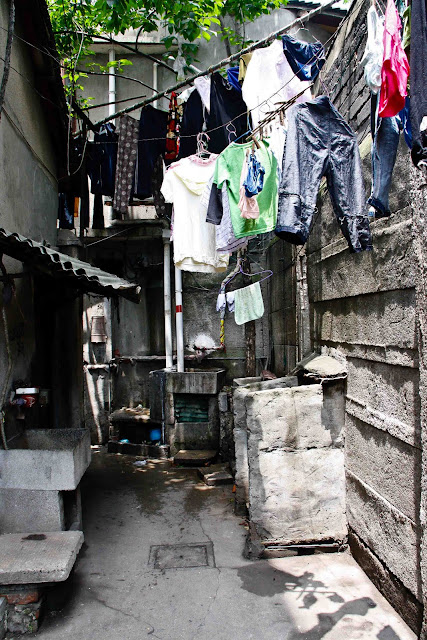 Outdoor stone sinks, often the only source of running water for a home. 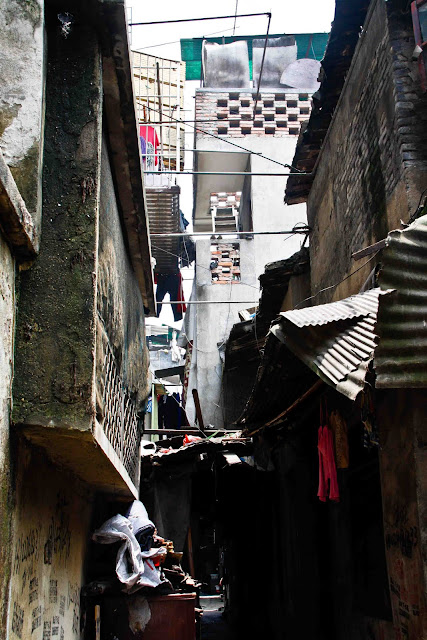 Hard to see where the original house begins and ends... 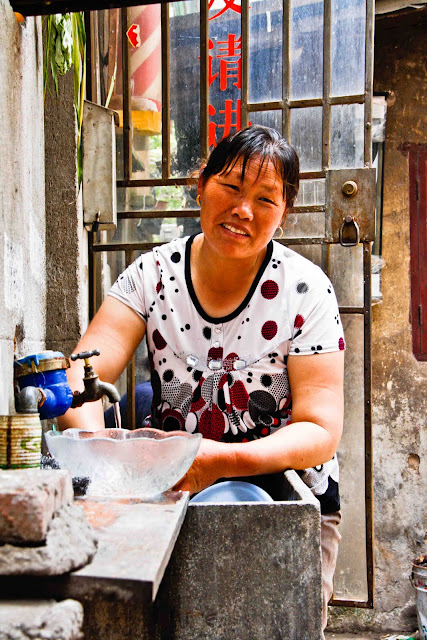 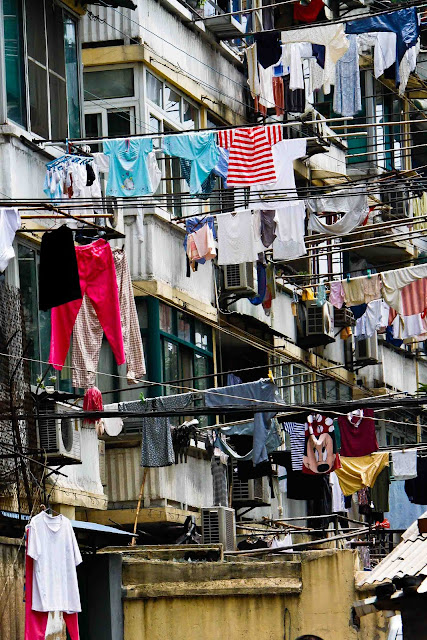 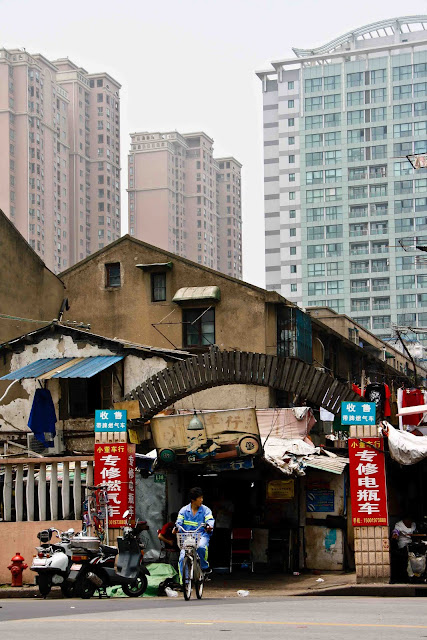 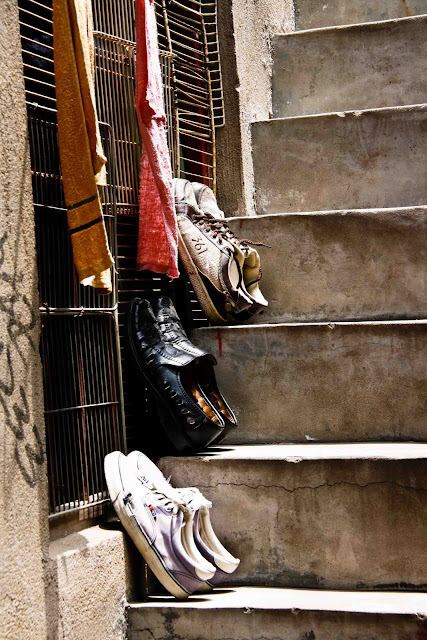 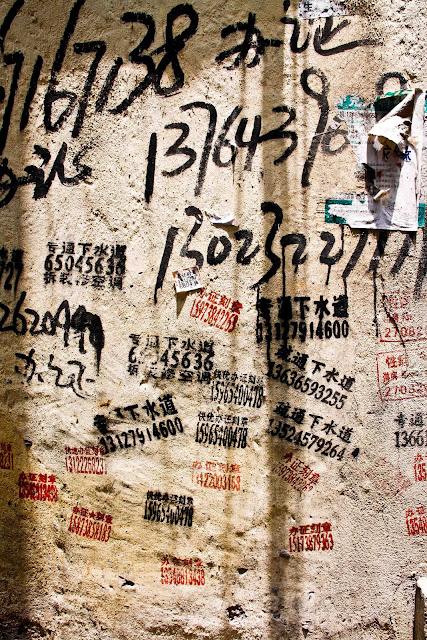 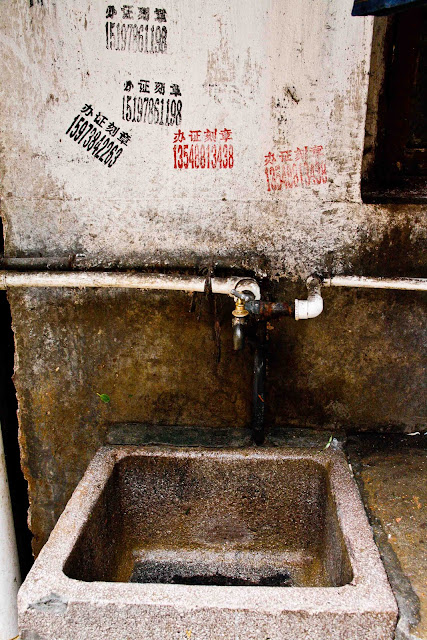 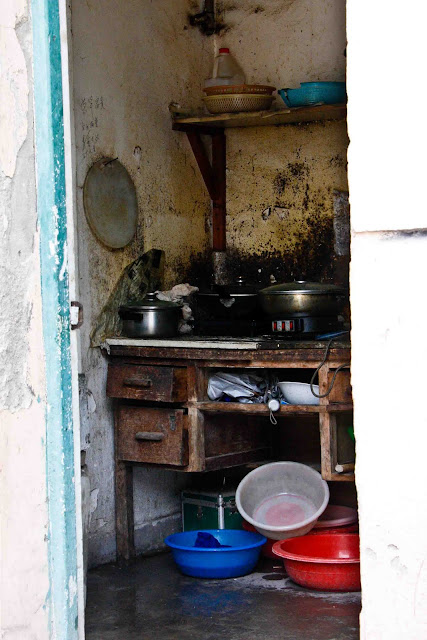 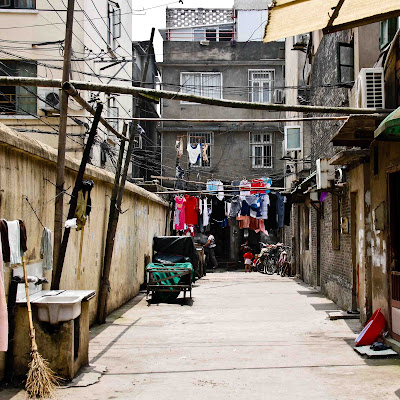 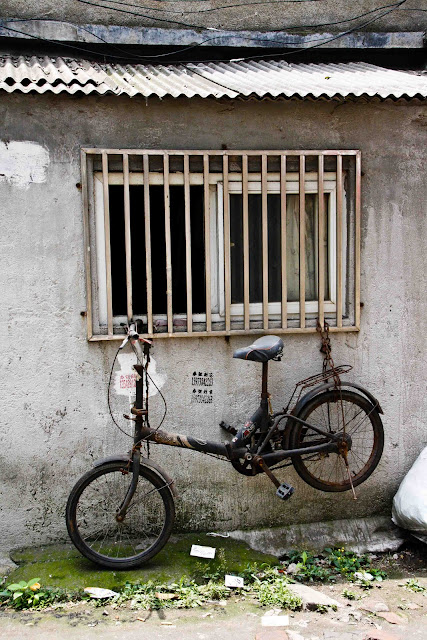 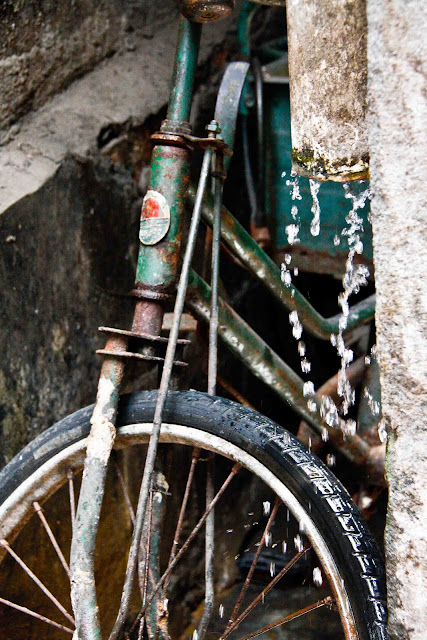 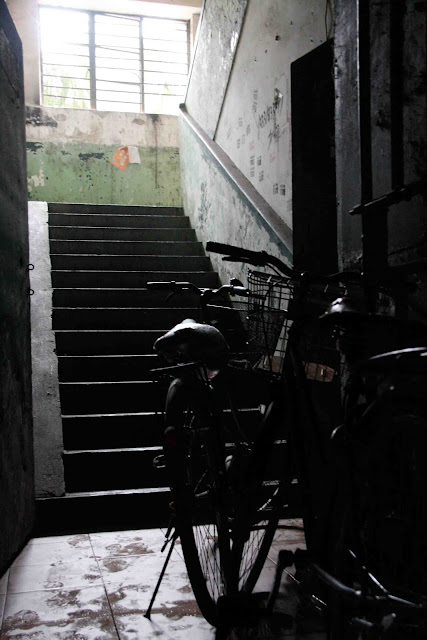 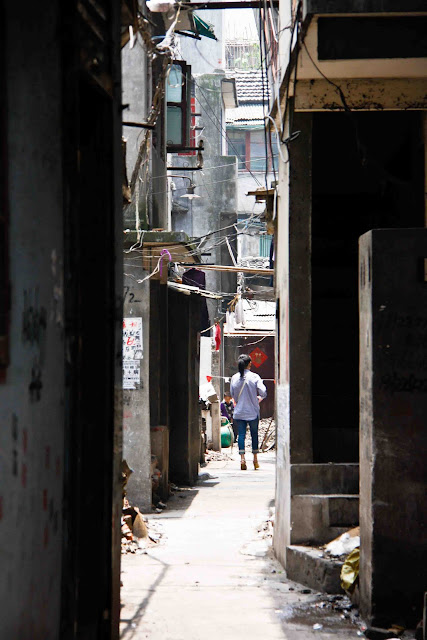 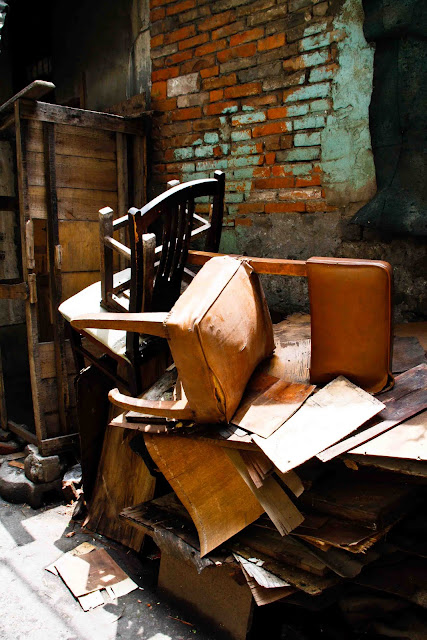 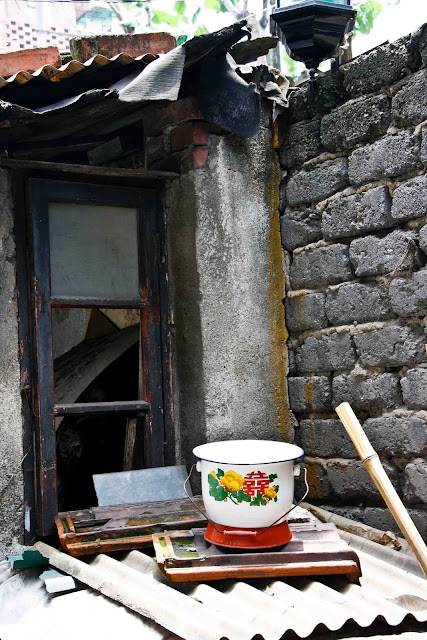 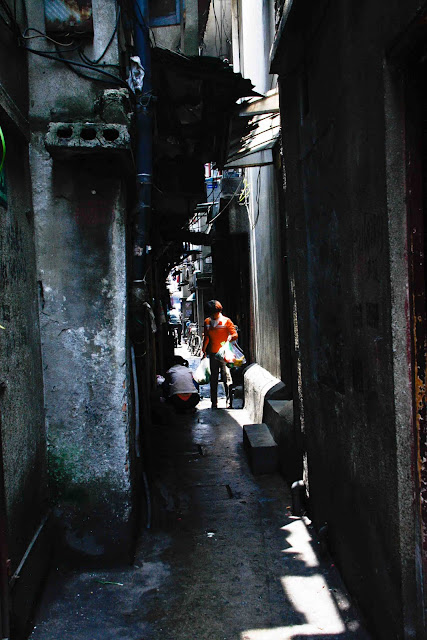 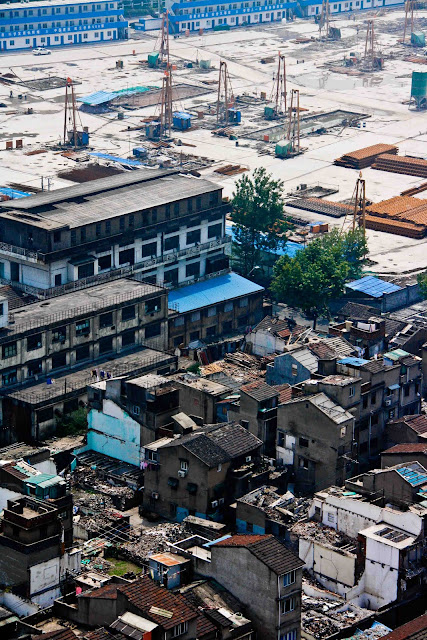