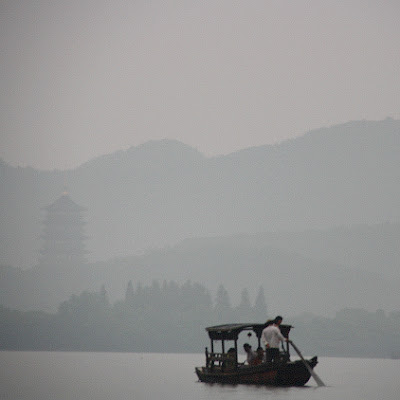 I really needed no excuse to visit Hangzhou again,with its exquisite lake and its tranquil temples. Now only forty minutes from Shanghai by high-speed rail, we spent the weekend there with my mum, enjoying as much of the lake and the great local food as the wet weather would allow.


Hangzhou was one of Marco Polo's favourite places in China, way back in the fourteenth century, and you can still see why. The city's fabled lake, Xi Hu, is surrounded by tea plantations, emerald green hills, temples and pagodas, and crossed by a pair of wide causeways covered in trees and beautiful gardens. The lake, often shrouded in mist, is fringed by weeping willows gently touching the water, and in summer by fields of bright green lotus with their impossibly pink blossoms. Small open wooden boats ply back and forth between the shore and the islands, much as they would have done in Marco Polo's day. The spreading spawl of Hangzhou city has done well to stay as far away as possible from the lake edge, maintaining the illusion of a lake of tranquility and peacefulness. 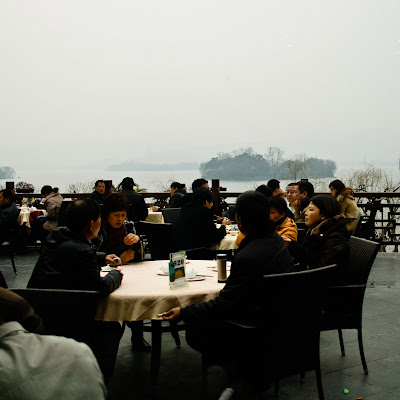 On the western side of the lake is Hangzhou's oldest restaurant, Lou Wai Lou, an imposing building sitting right on the water's edge, with a huge outdoor terrace looking directly onto the lake. Their specialty is one of Hangzhou's most famous dishes, Beggar's Chicken (jiào huā jī 叫化鸡), and at Lou Wai Lou, they have been serving it up since 1848. Like all great dishes in China, Beggar's Chickn has a story behind it worthy of its own novel. The story (or stories, for there are many versions) goes something like this:

One day, a lowly beggar found a chicken roaming free. Starving and desperate, he killed and plucked the chicken and wrapped it tightly in lotus leaves to take home. Not long afterwards he realised his theft would be discovered by guards who were walking nearby, so he hurriedly buried the chicken in the clay mud near the shore. The beggar waited for the guards to pass, then dug up his chicken which to his surprise had baked hard under the day's hot sun. When the hardened clay was cracked open the chicken inside was tender, succulent, and flavoured with the delicious scent of lotus leaves. 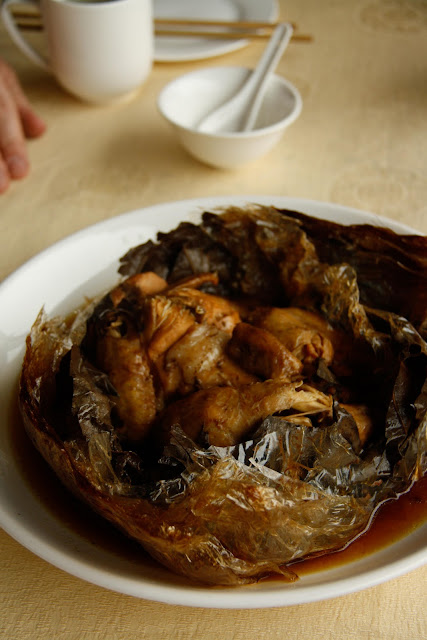 At Lou Wai Lou the chickens are marinated, stuffed with mushrooms, ham, and preserved vegetables, then wrapped tightly in lotus leaves and layers of closely sealed oven wrap before baking for three to four hours. Cutting open the oven-wrap with scissors is not quite as dramatic or romantic as cracking open a clay-covered chicken with a hammer, but a lot less messy.

The aromas that escape as the parcel is opened are of herbs, smoky ham, shaoxing wine, soy,and the particular herbaceous smell of lotus leaves, and the chicken falls away tenderly from the bone and into the delicious concentrated juices inside the parcel. 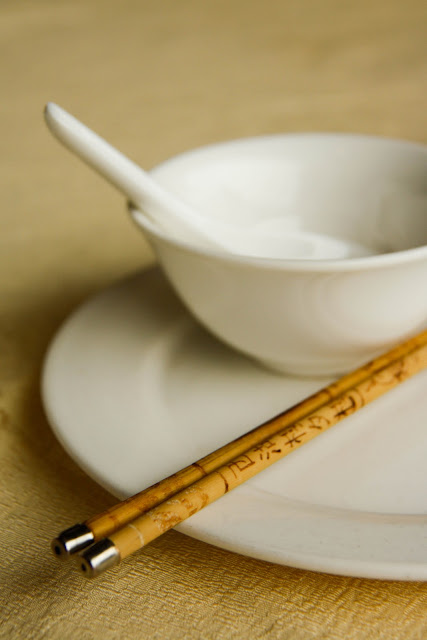 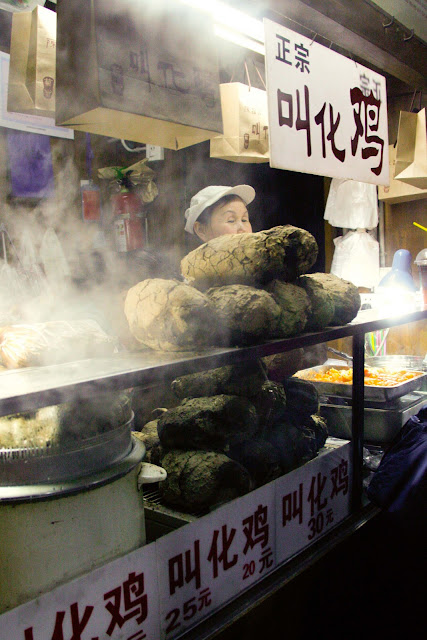 At Hangzhou's night market on Qing He Fang Gu Jie you can buy Beggar's Chicken in its clay casing for only 30 yuan ($5), complete with a pair of plastic gloves so you don't get your hands dirty.

Adapted from About.com's recipe
If you would prefer not to make the clay dough, simply wrap the chicken in a further two layers of aluminium foil before baking.

Nicole Mones, who wrote The Last Chinese Chef, includes a recipe for Beggar's Chicken on her website, after the dish featured heavily in a chapter of the novel. It is not a precise recipe, with no amounts or measures, but makes for interesting reading and was given to Mones by the chef at Lou Wai Lou.