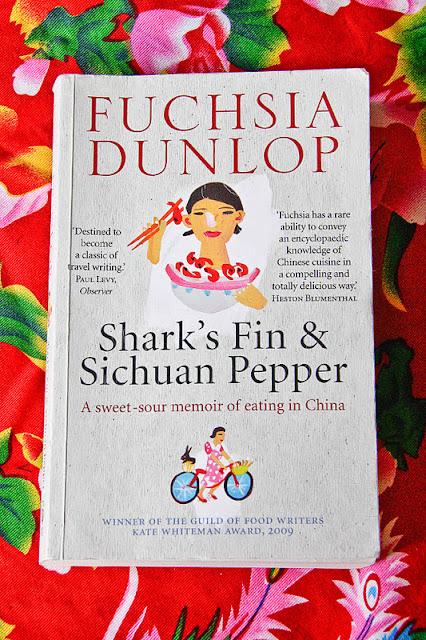 Fuchsia Dunlop , a woman with a wonderfully exciting depth of knowledge about Chinese food, is now officially my favourite food writer (apologies, Jeffrey Steingarten and the two Elizabeths, David and Romer). Dunlop knows her subject inside out and brings her love and passion for the food of China, and of Sichuan in particular, to a wider audience with her third book, Shark's Fin and Sichuan Pepper.


The book chronicles Dunlop's evolving love affair with Sichuan food, peppered with recipes and woven through with her observations on food history, language and culture. Shark's Fin and Sichuan Pepper won the Guild of Food Writers Kate Whiteman Award for Food and Travel and the IACP Jane Grigson Award in 2009.

Dunlop arrived in Chengdu on a British Council scholarship in 1994 (purportedly to study Chinese policy on ethnic minorities) but became entranced, captivated and totally distracted by the food of Sichuan somewhere along the way, eventually studying Sichuan cuisine at the Sichuan Institute of Higher Cuisine and mastering the intricacies of flavour combinations, cutting skills, and the mystical 'huo hou', the sense of heat when cooking in a wok. She went on to write what many consider the book of Sichuan cuisine, Sichuan Cookery, and a second book on the food of Hunan, the Revolutionary Chinese Cookbook, written during the terrifying SARS epidemic of 2003.


Her personal stories of culinary discovery are flavoured with the challenges of being foreign in a part of China that saw few foreigners at the time, and of coming to grips with an alien language and culture.


The book opens with a description of Dunlop's first taste of proper Chinese food, and in stark contrast to her later lavish descriptions of Sichaun dishes, it leaves us reeling with visceral disgust -

"The preserved duck eggs were served as an hors d'oeuvre in a fashionable Hong Kong restaurant, sliced in half, with a ginger-and-vinegar dip. It was my first trip to Asia, and I had rarely seen anything so revolting on a dinner table. They leered up at me like the eyeballs of some nightmarish monster, dark and threatening. Their albumens were a filthy, translucent brown, their yolks an oozy black, ringed with a layer of greenish, mouldy grey.  About them hung a faintly sulphurous haze. I tried one, just to be polite, but ts noxious aroma made me feel nauseous and I found it hard to swallow. Afterwards, a slick of toxic black slime from the yolk clung to my chopsticks, threatening to pollute everything else I ate. Surreptitiouly I tried to wipe them on the tablecloth."

"They looked quite plain, a small bowlful of noodles topped with a spoonful of dark, crisp minced beef. But as soon as you stirred them with your chopsticks, you awakened the flavours in the slick of spicy seasonings at the base of the bowl, and coated each strand of pasta in a mix of soy sauce, chilli oil, sesame paste and Sichuan pepper. The effect was electrifying. Within seconds, your mouth was on fire, your lips quivering under the onslaught of the pepper, and your whole body radiant with heat."

Dunlop takes us on a lip-smacking ride through Sichuan food, food history, Chinese culture and travel. My favourite chapter by far is one on which she returns to Sichuan to hunt down the best Sichuan pepper, that lip-numbing spice so intricately associated with Sichuan food. Part homage, part travelogue, she travels eight hours by long-distance bus to the remote township of Qingxi, the home of the world's best Sichuan pepper. Dunlop doesn't disappoint with her description of the first taste of the tiny peppercorns.

"And then I put some pepper between my lips. In its green astringent newness, it puckers my tongue immediately, and then, a few seconds later, the tingling hits. That incomparable tongue-numbing sensation of Sichuan pepper, a fizzing that starts stealthily and rises to a mouth-streaming breathtaking crescendo that can last for twenty minutes before it slowly, gradually, dies away. It's stronger even than I expected, and I laugh in surprise. For years I have dreamt of tasting Sichuan pepper on the tree, and here I am, in Qingxi itself, my lips singing."

In the haphazard world of English language books in Shanghai, it took quite some time to track down a copy of Shark's Fin and Sichuan Pepper. In a way, though, it was important for me to find Dunlop's book now, rather than two years ago, because it is so much more meaningful after having seen more of the country and experienced more of its food.

Although I read and enjoyed Shark's Fin and Sichuan Pepper because of its food focus (and certainly the descriptions of Sichuan foods make your mouth fairly water), for me Dunlop became something of a cultural guiding light as she explained so many aspects of Chinese food culture I found intriguing and at times repulsive, like the apparently barbaric treatment of animals used for food. I recall watching with growing horror as a Shanghai market vendor plucked a young chicken while it was still alive, its eyes bulging with fear and pain as it struggled desperately to get away and blood dripped onto the woman's jeans. All the while, she chatted with her neighbouring vendor while her toddler played with an empty plastic drink bottle nearby. Dunlop explains this seeming callousness thus -

"I'd been to many Chinese markets before that outing with Feng Rui, and had at first been amazed - and appalled- by the cruelty I witnessed. It was the sheer nonchalance of it, the way people scaled fish as though they were simply peeling potatoes, skinned live rabbits while smoking a cigarette, joked with a friend as the blood drained from the throat of a bewildered duck. They didn't kill animals before they cooked and ate them. They simply went about the process of preparing a creature for the pot and table, and at some random point it died. But there, perhaps, is the crux of the matter, embedded almost invisibly in those last two sentences. In English...the words for the living things we eat are mostly derived from the the Latin anima, which means air, breath, life. 'Creature' from the latin word for 'created',seems to connect animals with us as human beings in some divinely fashioned univere. We too are creatures, animated. In Chinese, the word for animal is dong wu, meaning 'moving thing'. Is it cruel to hurt something that you simply see as a 'moving thing', scarcely even alive?"

Dunlop also goes on to explain, among other things, the Chinese fascination with gristly and rubbery food textures, and the attraction of eating wild and endangered animals. For a foreigner like myself trying desperately to come to grips with China, the country, through Chinese food, this is a tremendously enjoyable read. I often felt Dunlop had been surreptitiously reading my thoughts, she seemed to describe my life so accurately, except that of course, she'd done it all many years before me.

"I took a few private Chinese lessons and spent the rest of my time hanging around markets and restaurants, or sitting in teahouses, poring over dictionaries and photocopies of local restaurant menus."

Hmm. I know someone who may or may not do exactly that.

Reviews of other books on Chinese food and travel you might enjoy: