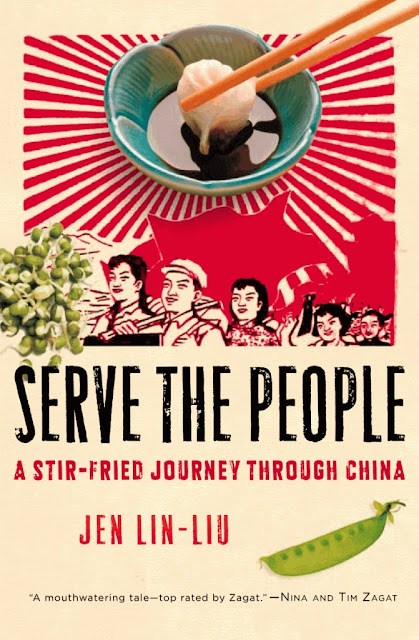 Is it June already? How did that happen? This year seems to be positively flying by at great speed. I am guilty of having failed to post my promised monthly book review for the Foodie's Reading Challenge (where I may have, in a moment of bravado, promised to read 12 books this year about Chinese food and cooking, fiction and non-fiction). Let's see...this is June, and so far I've posted Nicole Mones' The Last Chinese Chef in February, and Kylie Kwong's My China in March. What happened to April and May? I suppose tripping around the countryside and ignoring/neglecting my regular reading in favour of Lonely Planet China and Simon Winchester's incredible book, The River at the Centre of The World (a Journey up the Yangtze and back, in Chinese time) explains a fair bit of it.

This month I bring you another wonderful book about Chinese food, Serve The People - a memoir by American-born journalist of Taiwanese heritage Jen Lin-Liu. I have read Serve the People twice now. The first time, a month after I arrived in China, I remember devourng the entire book in an afternoon, trying desperately to get a grip on the confusing country I found myself in and trying to make sense, any sense, of Chinese food. The second time was last month, when I could read and slowly savour the foods, the recipes, and the life stories that all now fell into place and made much more sense to me. I guess I've learned a lot in two years.


This true story recounts Lin-Liu's desire to reclaim her Chinese roots through food. Having lived and worked in China for five years before taking the plunge and enrolling as a student in the Beijing Hualian Cooking School in the book's opening chapter, Lin takes us on her adventures first as a cooking school student, then as an apprentice noodle and dumpling maker, and finally as an assistant in the kitchens of a high-end Shanghai restaurant. Throughout, Lin meets an extraordinary array of ordinary Chinese people who earn a living working with food - chefs, kitchen hands, cooking students, waitresses and farmers, and visits some unusual places - the rice terraces of Ping'an, near Guilin, an MSG factory in Henan, and Nanxiang, the home of xiao long bao.


It is the human stories that remain with the reader long after the food descriptions have faded. After three months of learning the ropes of Chinese restaurant cooking, Lin leaves the cooking school with something even more valuable - a friendship with the cooking school's assistant, a sixty-year old woman fondly nicknamed Chairman Wang.

'"Chairman" was a bit misleading: it was more of an honorary title for a low-paying, all-purpose job that encompassed serving as a registrar, assistant to the school's president, assistant teacher, food purveyor, and de facto janitor - in short, all the tasks that no one else wanted to do. During demonstration classes, Chairman Wang moved around the kitchen in a slow shuffle, tidying up after Chef Gao and lighting the burner just when he needed it. She had a stern, matronly air about her, but once in a while she'd break into howling laughter. She always wore a blue lab coat, which, combined with eyeglasses and wiry gray hair that stood up in stiff, Albert Einstein-like puffs, made her look like a mad scientist.'
Lin-Liu's friendship with Chairman Wang threads through much of the book, and as Chairman Wang gives extra lessons to help her pass the difficult cooking school exam, she gradually learns about the Chairman's troubled past and her terrible struggles during the Cultural Revolution. But if Lin-Liu thought getting through cooking school was difficult, the hard graft really begins when she is taken on as apprentice to noodle maker Chef Zhang, a poor migrant worker struggling to make it in his own noodle stand after twenty years working in a state-run restaurant.

'Chef Zhang was my introduction to an entirely different class of people, the struggling migrant workers with little time to complain about social ills or the graft of government officials.....He was born into a family with five sons and one daughter. Zhang's parents were too poor to raise all six children, so they decided to give two of them away. Zhang, as son number four (an unlucky number in Chinese tradition) and his sister (unwanted because of her gender) were sent to live with a childless aunt and uncle...'

Hard beginnings, but Chef Zhang's life, as a migrant worker supporting a family back home, continues to be a struggle. Noodle-making is difficult, repetitive, sweaty work, but despite this Lin-Liu has great respect for Chef Zhang and with intense resolve, comes back day after day for hours of back-breaking toil until she feels she can hold her head up high as a noodle maker. Her first attempts though, meet with limited success.


'Splashes of boiling water singed the back of my hand. Steam penetrated the pores of my face. I glanced uneasily into the gigantic wok and took a deep breath. With a noodle knife as sharp as a razor blade, I was trying to grate the five-pund slab of dough I held on my left forearm into ribbons. Dao xiao mian - knife grated noodles - were a specialty of Chef Zhang's home province of Shanxi. When Zhang made them, they came out ridged and elegant, like party streamers. They slid into the wok with just a hint of a splash, like a succession of Olympic divers. Mine looked more like stretched out wads of chewing gum, too fat and shaved at the wrong angle. They belly-flopped into the wok, like chubby kids at a community pool. Each splash of boiling water was an indictment from the noodle gods.'


Eventually Lin-Liu completes her noodle apprenticeship, spends a while learning how to master dumplings, then manages to work in the kitchens of Shanghai's Whampoa Club alongside celebrity chef in the making, Jereme Leung. It's a stark contrast to the noodle stall but offers a fascinating insider's view of the business of fine dining, with emphasis on the 'business'.


Serve the People ends with Lin-Liu's eventual return to Beijing, and to a developing relationship with the man who becomes her husband. You feel that after all her struggles and learning, Lin-liu has achieved her goal and is truly connected with Chinese food, Chinese cooking, and Chinese people. Through wonderful character portrayals and a great talent for description, Serve The People often reads more like a novel than a work of non-fiction. The recipes sprinkled throughout the book serve as a reminder that Jen Lin-Liu actually cooked this, in real life, and snap the reader back to the realisation that these are not stories, but real events.


After completing Serve The People, and unable to get cooking out of her system, Lin-Liu established Beijing's Black Sesame Kitchen cooking school along with Chairman Wang. I took a look yesterday at the Staff Bios page on the website, and an inadvertent tear sprang to my eye to see, not only a photograph of the wonderful Chairman Wang, exactly as I imagined her, but also Chef Zhang, the noodle master, now working as a teacher at Black Sesame Kitchen and recently returned from a stint cooking in Las Vegas. He looked plump and happy in the photos, a far cry from his struggles to raise a family and make ends meet in the 40cents-a-bowl noodle trade. It seemed a fitting end to a wonderful story.
'Then I remembred something that Chairman Wang had told me once: "Suan, tian, ku, la. Sour, sweet, bitter, spicy. In my life, I've tasted them all." Her life had been more bitter than sweet, more sour than spicy, but things were hai xing, not bad, and that gave me hope for the rest.'