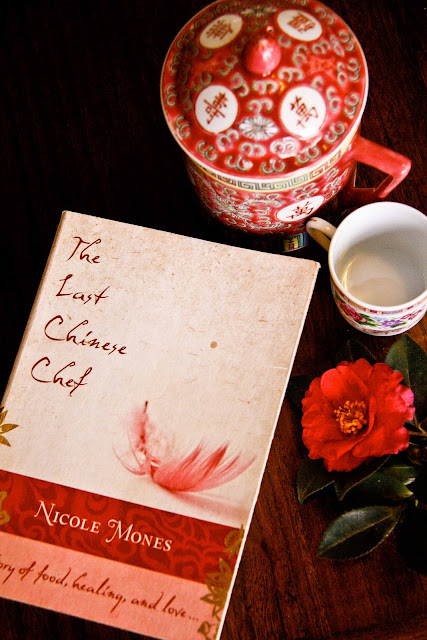 Way back in the first few days of January I committed myself to being a Glutton -  no news to you guys, I'm sure. But this is a special type of gluttony.....I signed up for the annual Foodie's Reading Challenge as a BOOK glutton.
In the Challenge, you are invited to read and review as many food-related books as you can get through in a year.
To really set myself a challenge, I've so far found six books about Chinese food to read this year, and I'm hoping to find another seven along the way. Recommendations very welcome!

First book for the year is The Last Chinese Chef, by Nicole Mones. (Fourth Estate 2007). This book somehow found its way into my house, without me having bought it, without it being given as a gift. It just literally turned up one day, so of course, I had to read it.
The opening lines of The Last Chinese Chef set the scene for a rich and thoughtful novel where food is undoubtedly the main character.

'Apprentices have asked me, what is the most exalted peak of cuisine? Is it the freshest ingredients, the most complex flavors? Is it the rustic, or the rare? It is none of these. The peak is neither eating nor cooking, but the giving and sharing of food.' - Liang Wei, The Last Chinese Chef, pub. Peking, 1925.
We meet Maggie, a food writer, a year after she has been suddenly widowed. Clinging to her work as a way of pulling her through her bottomless grief, her passion for food has survived the turbulence of the past year intact. When she suddenly finds herself traveling to Beijing to resolve an issue with her late husband's estate she decides to combine it with a work assignment, interviewing up-and-coming American-Chinese chef Sam Liang.
Sam, in training for a national culinary competition and preparing to open his first restaurant, is inspired by a book written by his grandfather Liang Wei, the last chef of China's Imperial Court. The fall of the Qing Dynasty in 1911, and the subsequent revolution, mean that the secrets of the Imperial kitchen have been all but lost except for the words of his grandfather's book, titled 'The Last Chinese Chef'. Sam is laboriously translating the book into Engish, using the valuable knowledge gained to bring forgotten techniques and principles to his cooking. Add to this the rigorous culinary training given to Sam by his three strict but doting elderly uncles, Sam is hoping to revive the classical imperial cooking style of his grandfather and uncles to impress the judges with an unforgettable feast.

As Sam's Uncle Xie tells him:
'This is what you must understand if you are to be a true Chinese chef. Eating is only the beginning of cuisine! Only the start! Listen. Flavor and texture and aroma and all the pleasure - this is no more than the portal. Really great cooking goes beyond this to engage the mind and the spirit - to reflect on art, on nature, on philosophy. To sustain the mind and elevate the spirit of the meishijia [the gourmet]. Never cook food just to be eaten, Nephew!'
As Maggie learns more of Sam, she also learns more of a cuisine she previously knew little about. This is one of the most enjoyable aspects of the book for me, and parallels my own exprience of discovering the wonderment of Chinese food in China, as opposed to the vastly differene Chinese cuisine we eat in the West. As each new dish is tasted, our eyes are opened to a way of cooking and eating of never-imagined complexity and nuance, like the Chinese concepts of xian - the sweet, natural flavour of a food, like fresh fish or clear chicken broth; xiang - the fragrant flavor like frying spices or roasting meat; nong - the concentrated, deep complex taste from slow-cooking; and you er bu ni - to taste of fat without being oily.
And the food. The descriptions will make you want to immediately go and out and eat. Or cook. Or both.  Like this description of a dish of slow-cooked lotus-wrapped pork ribs that, in a quest for perfection, Sam's stern Uncle Xie makes him repeat three times:
'Inside the leaves, the rib meat came away under their chopsticks, rich and lean and long-cooked with a soft crust of scented rice powder..........The first bite bloomed in her mouth: lovely mahogony-deep pork with bright accents of onion and ginger.'
And of a fish soup: '...best of all was the second soup. It brought gasps around the table, even from Uncle Xie. The live fish had been transformed into pale, fluffy fish balls, light and airy and ultra-fresh. These floated in the perfectly intense fish broth with shrimp, clouds of soft tofu, and tangy shreds of mustard green. She felt when she was eating it that it nourished every part of her: it was a soup she sensed she would remember all her life.'


'a mince of wild herbs and dried tofu, sweet-savory puffs of gluten, and pureed scented hyacinth beans. He came back for the fragrant vinegar duck, spattered with brown Shanxi vinegar.'
Aaahh. It's a book about food, but also about relationships - it's not giving anything away to say that this is also a love story - focusing on the connections between people, mediated by food. From the extraordinary and intricately intellectual dishes of the Imperial Court, through to the present day, food is seen as a way of bringing people together, families, remembering lost loved ones, and celebrating the arrival of new ones. What we and Maggie discover is that Chinese food culture actually represents a way of cooking and eating that we've been trying to get back to for a long time in the West. The shared table. The value of technique. The respect for food's origins.
Nicole Mones, author of the ethereal Lost in Translation,  clearly knows and loves Chinese food. An American, she began doing business in China only months after Mao's death in 1976. She has returned to China over and over again in the intervening years, and her website looks like that of a foodie, not a writer - there are restaurant recommendations, and best of all, recipes for some of the wonderful dishes featured in her book, including the lotus-wrapped pork ribs.

Reading The Last Chinese Chef brought me such a great deal of pleasure - pieces of my Chinese puzzle fell into place, and I gained a deeper understanding of the food I'm eating every day, along with a beautiful tale of healing grief and love. I hope you will get a chance to enjoy it too.