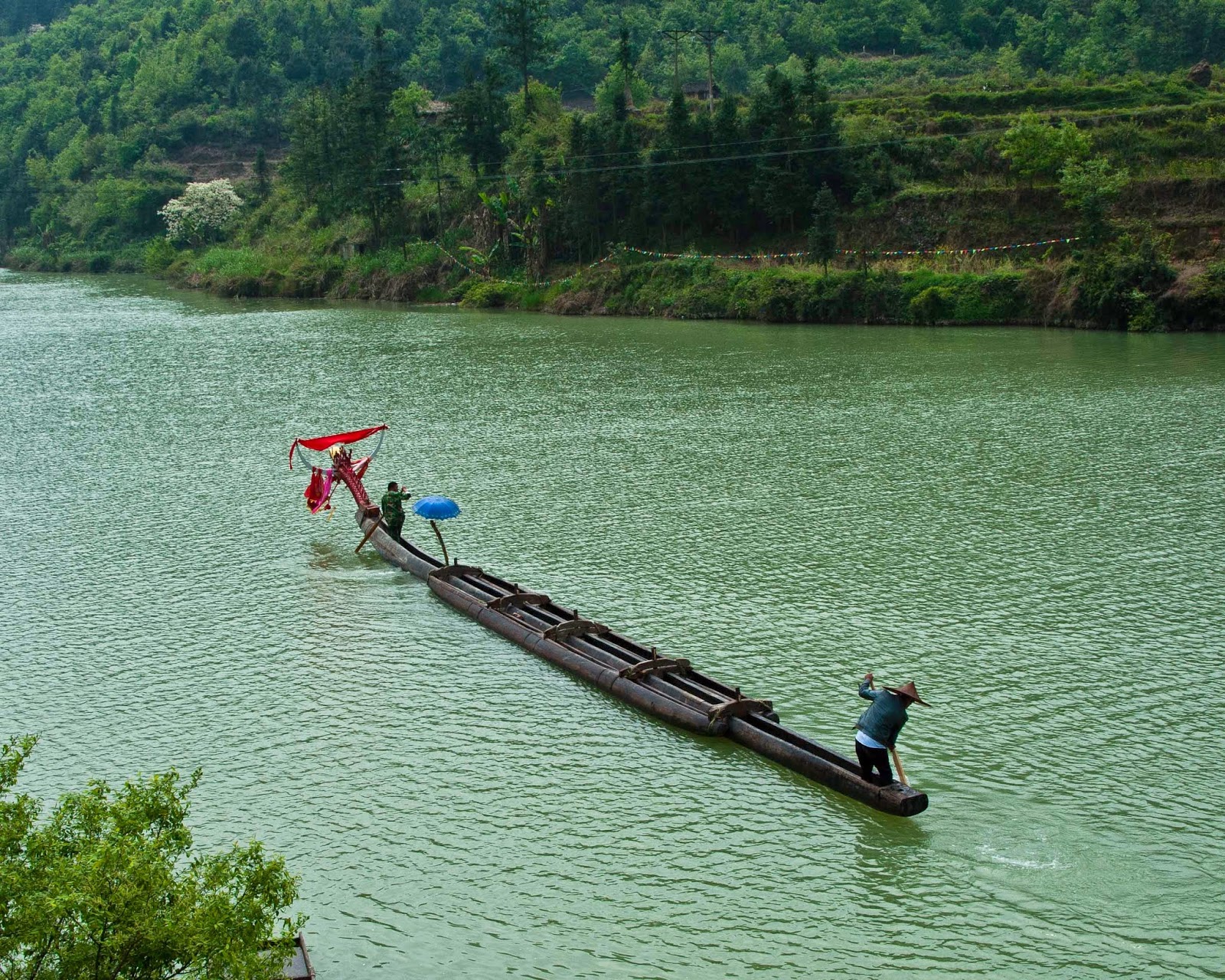 What I love about Guizhou just as much as its jade rivers, green mountains and beautiful people is the serendipity of the place. Surprising things seem to happen in Guizhou constantly, and if you travel through it for an hour, or better still, a day, you'll be certain to happen across something extraordinary just by chance.

When travelling I try to stay open to the possibility of a random encounter, even if it means changing my schedule, or missing something else.

I live by one travel rule: When the travel gods throw a crumb in your path, you need to pick it up and follow the trail. Don't step over the crumb. Don't ignore it.

These serendipitous experiences have formed some of my richest travel memories, like the time we met Chinese National Geographic photographer Big Mountain (his real name) and accompanied him to a Miao village ancestor's feast; or the time we visited cave-dwelling paper-makers, and the time I was invited to an impromptu house-warming feast for four hundred people.

So on my visit to Guizhou last month we drove past a group of men huddled by the banks of a green, green river, on our way to Shidong Market.

"I think they're maybe building a dragon boat there…" said Billy, our guide. "Want to have a look?"

So we stopped, and reversed a few hundred metres. There was indeed a plain wooden boat in the water, its yellow timber very freshly-hewn from a single tree trunk. But it was unadorned, not at all like the richly-painted dragon boats I had seen in other parts of China. 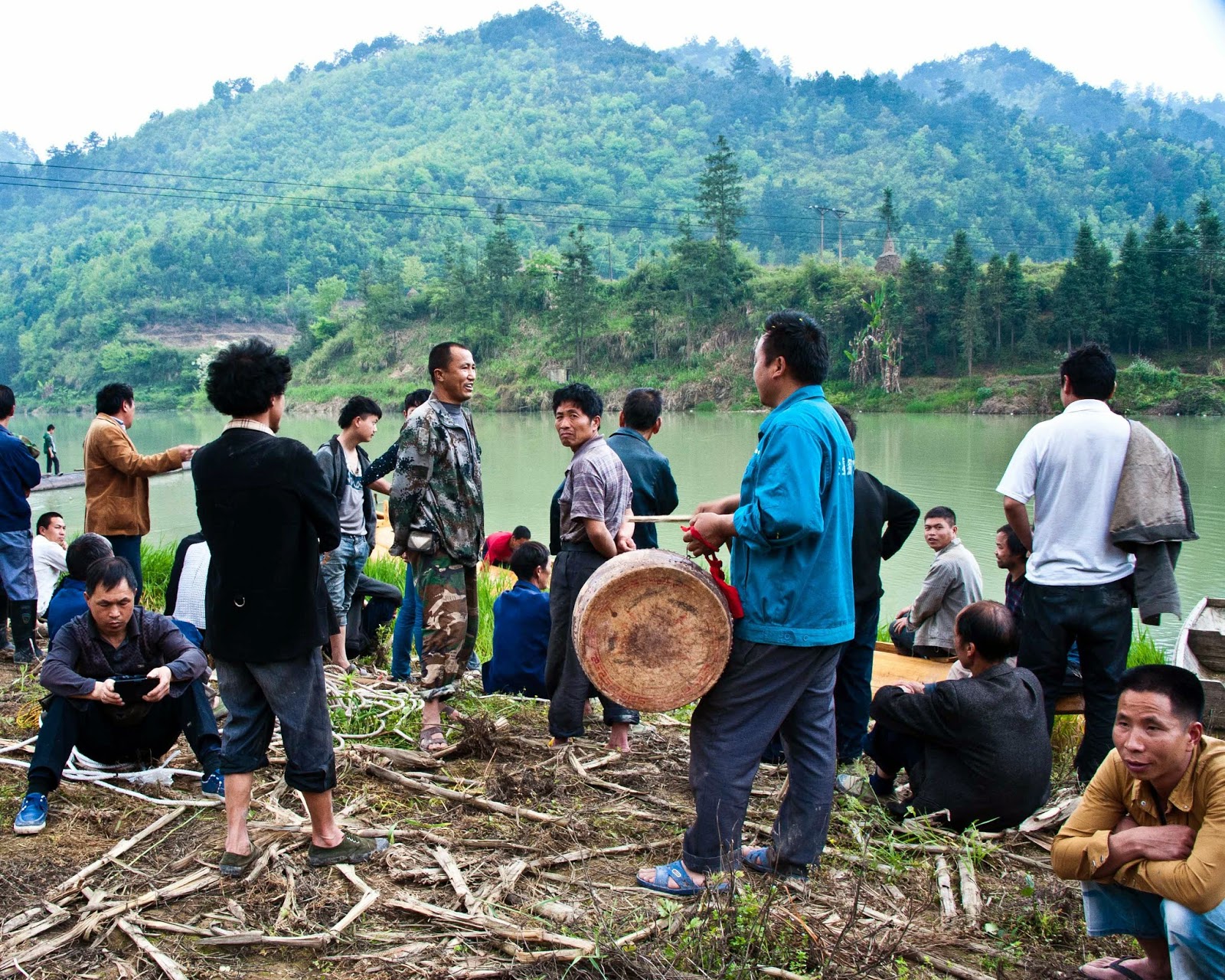 There were a couple of men in the boat itself, tying something together with what looked like strips of green bamboo. 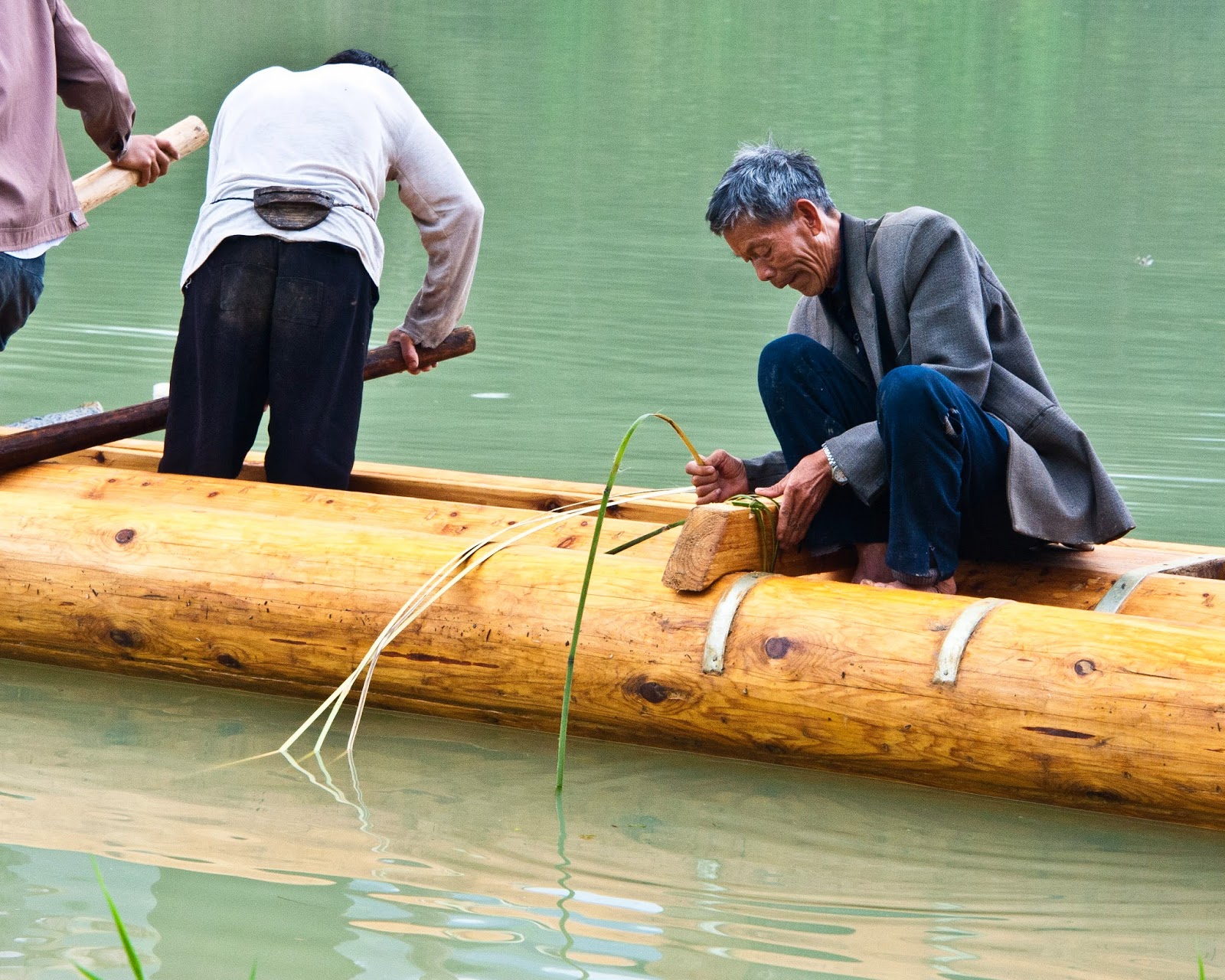 Someone had a small round drum covered with buffalo hide, and he began to beat it with a slow, steady beat. The men all turned around to see what was happening.

I saw a man walking towards me with a very small dragon in his hand. It looked light, like a hockey stick.  To be honest I felt a little disappointed because this dragon seemed too insubstantial for a boat that size, but there it was. I took 18 pictures of it, my lens trained tight on the man holding it. 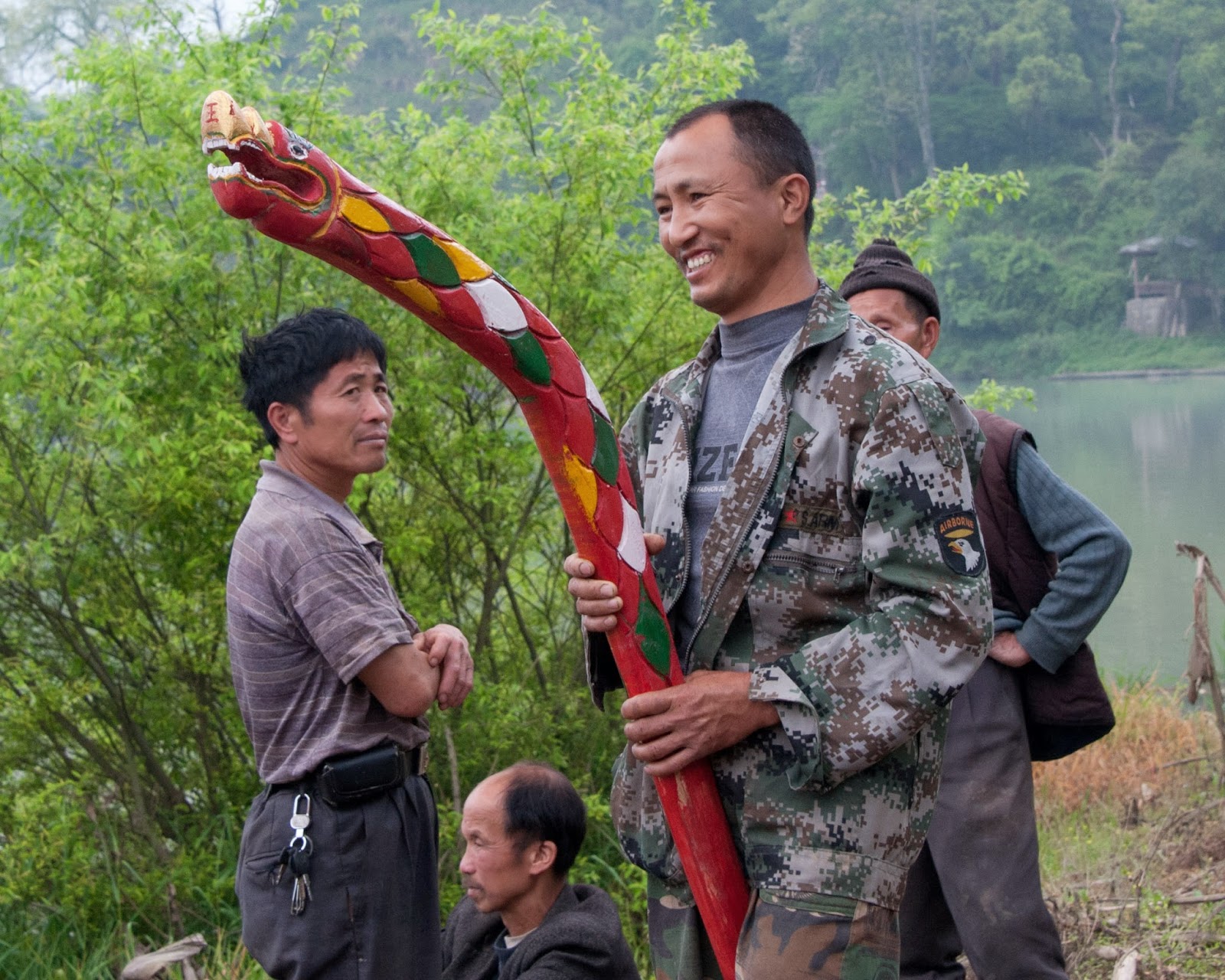 "Yeah?" I said, without looking up from my camera. 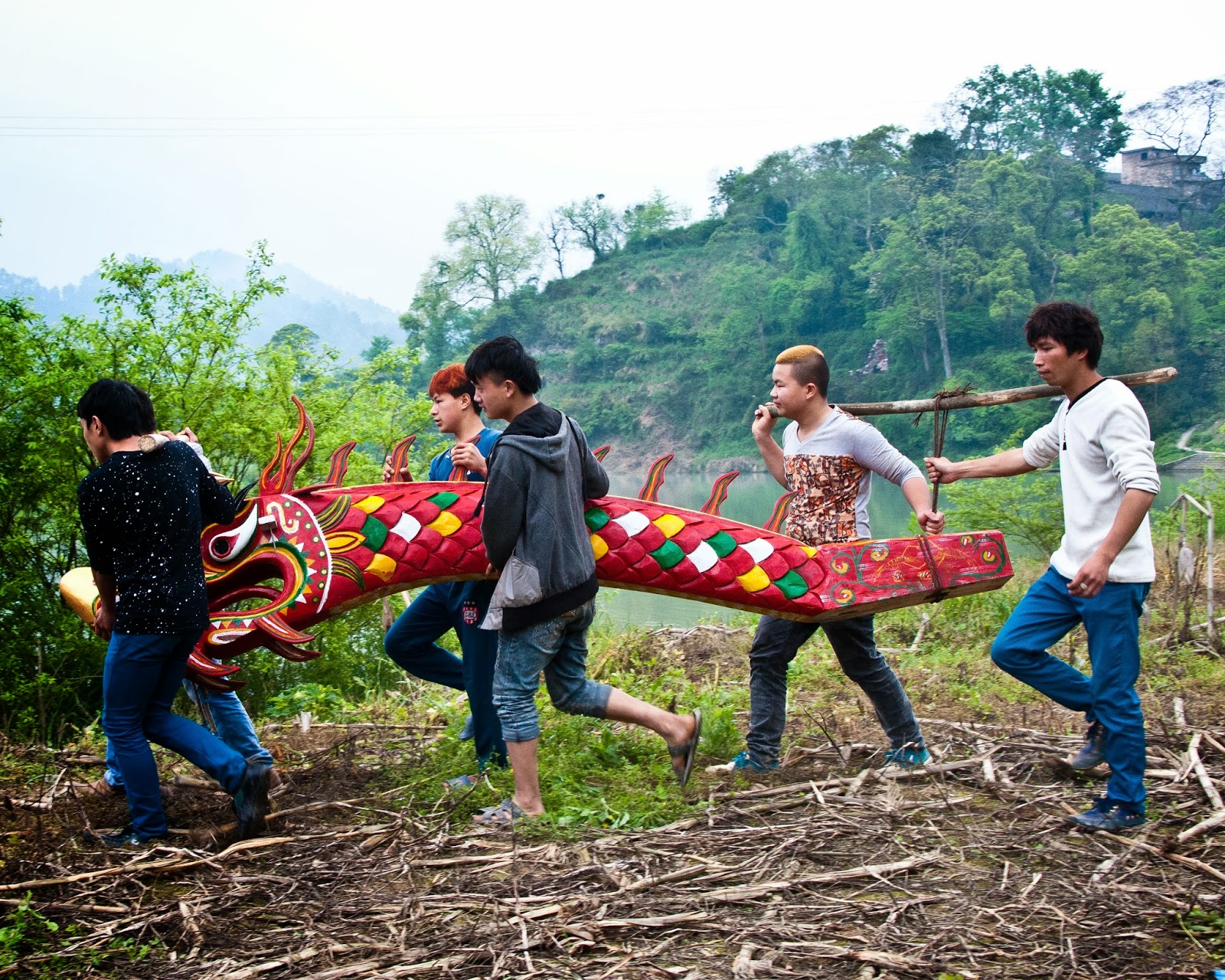 And there were six men struggling to carry the biggest, heaviest most colourful dragon head you ever saw.

Suddenly, all fifty men sprang into action to lift and position the dragon's head over the bow of the boat, pinning it into place at a point of exact balance. 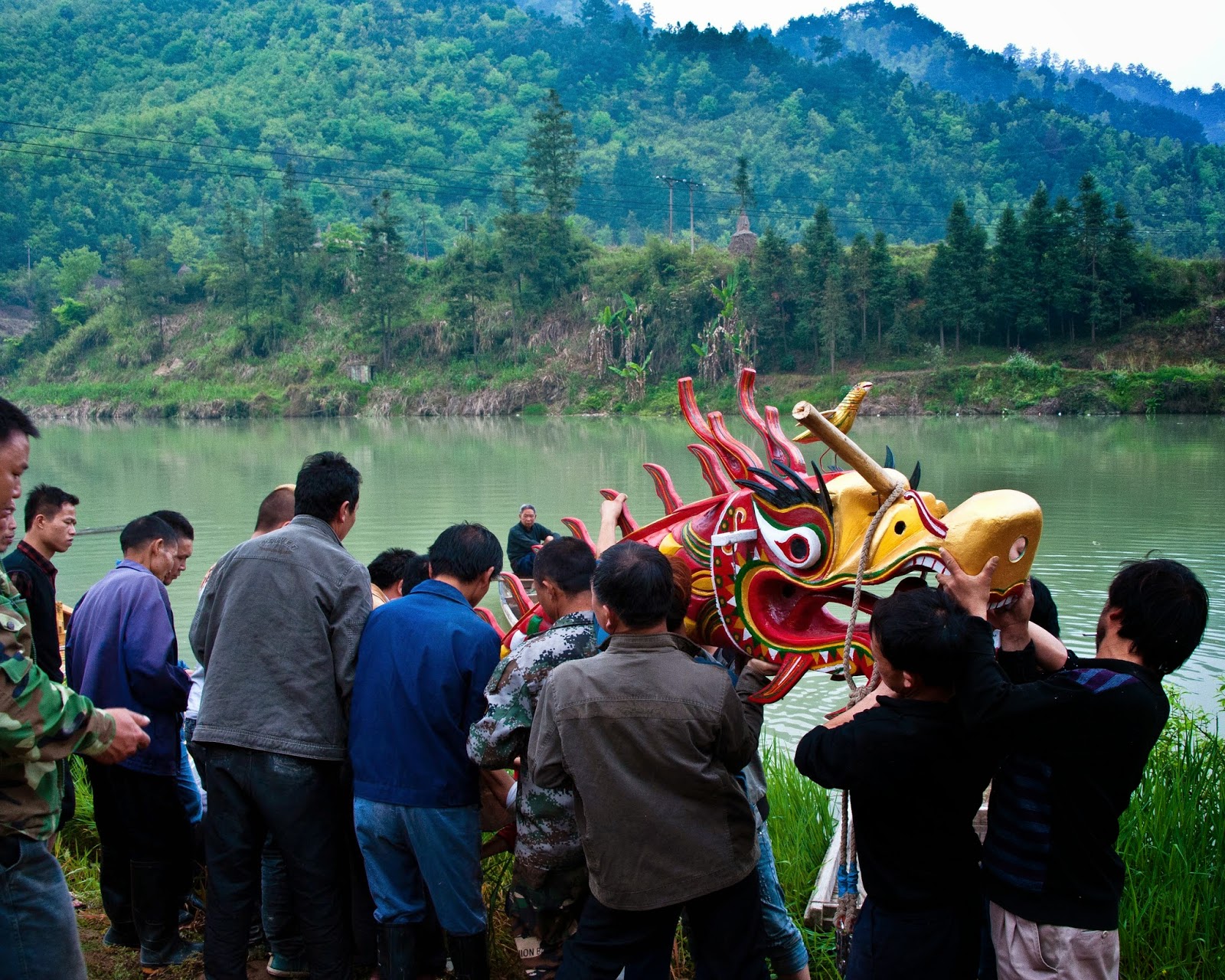 Because this part was quite difficult and very strenuous, two men gave continuous advice from a small wooden boat out on the river. Everyone ignored them. 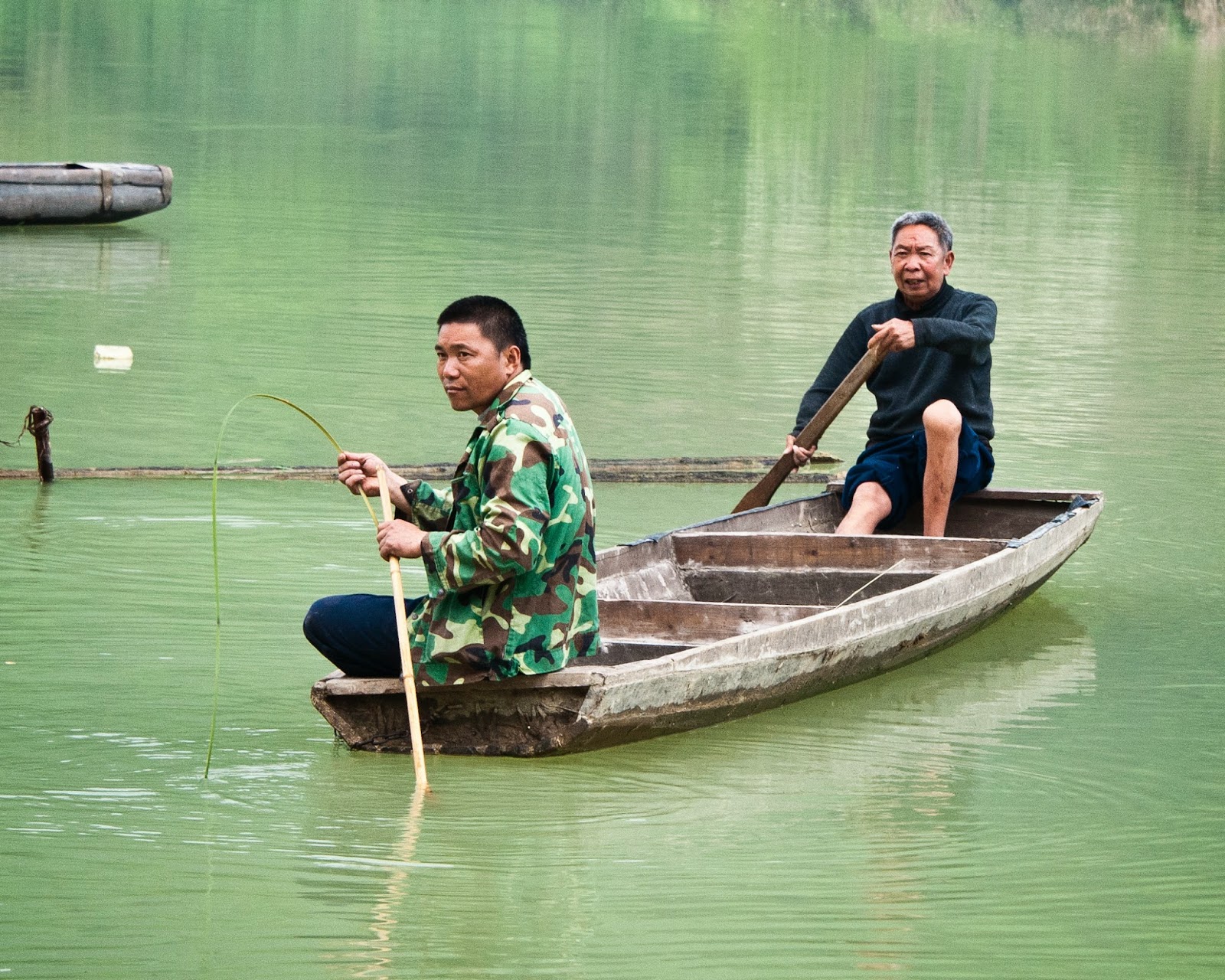 The head in place, I admired the dragon's white wooden teeth, his mirrored nose, his long black eyelashes, and the bird sitting jauntily on top of his head. 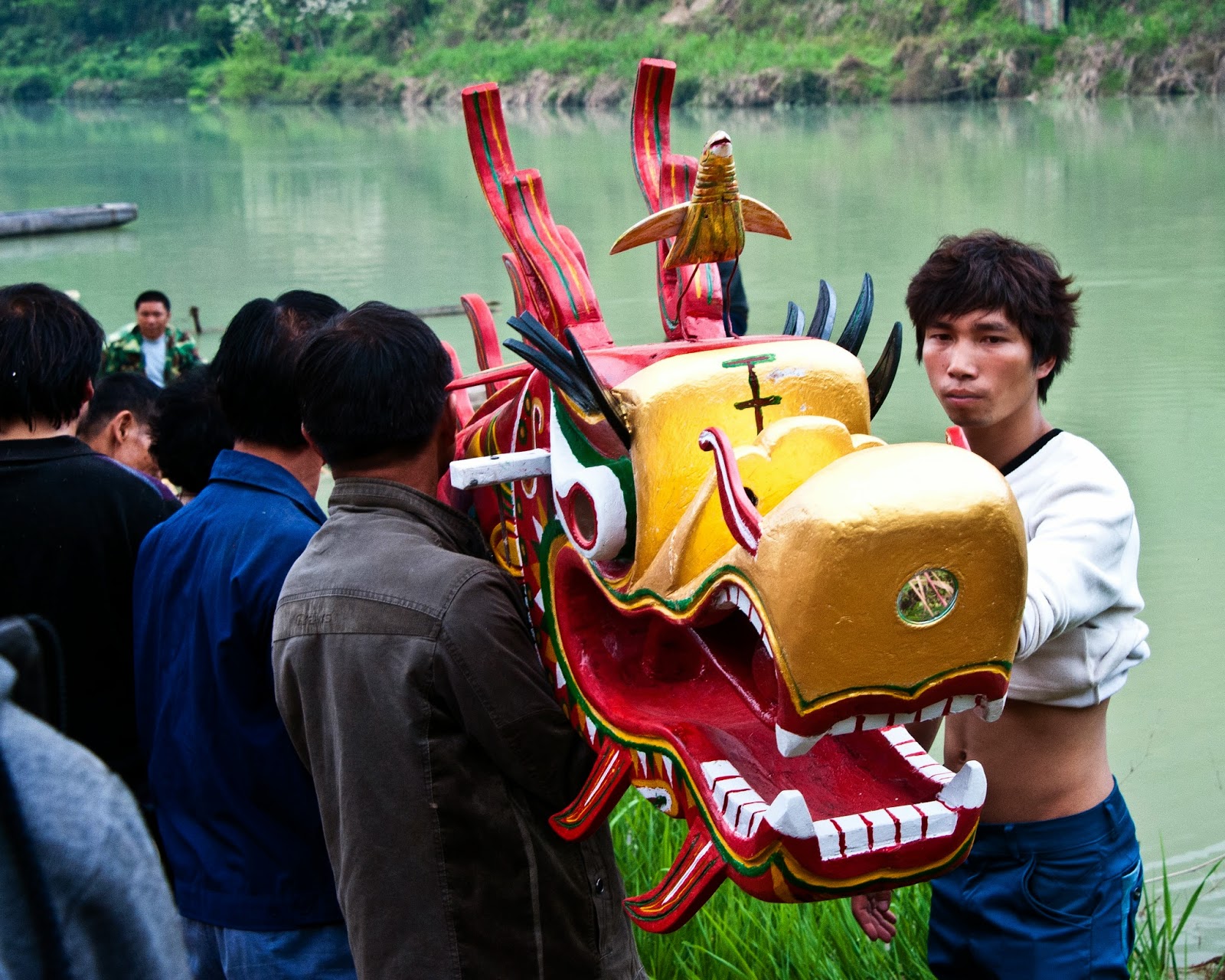 But something seemed missing: his horns. Because these are Miao Dragon Boats, the dragons have the horns of the water buffalo, an animal of great importance in Miao culture. 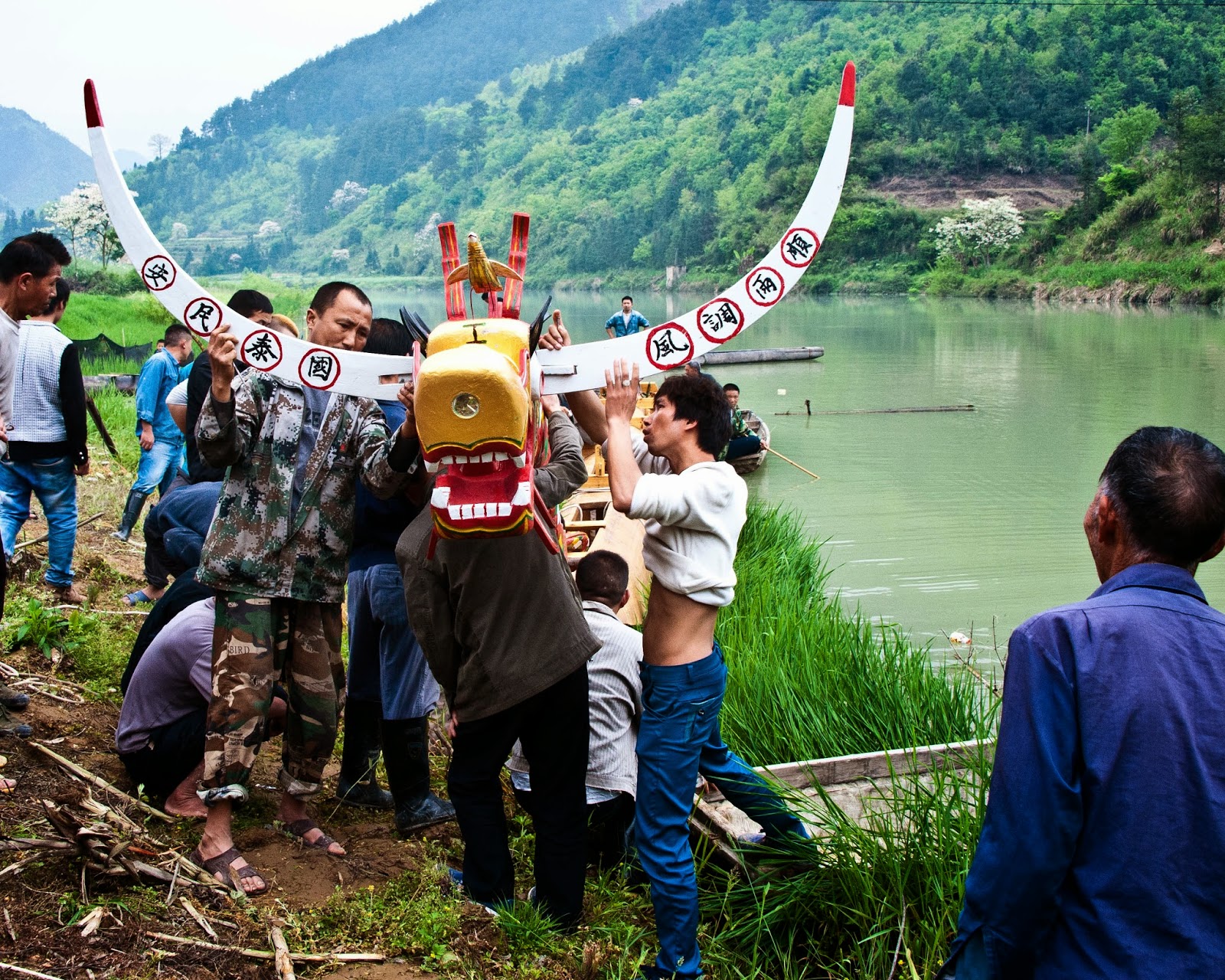 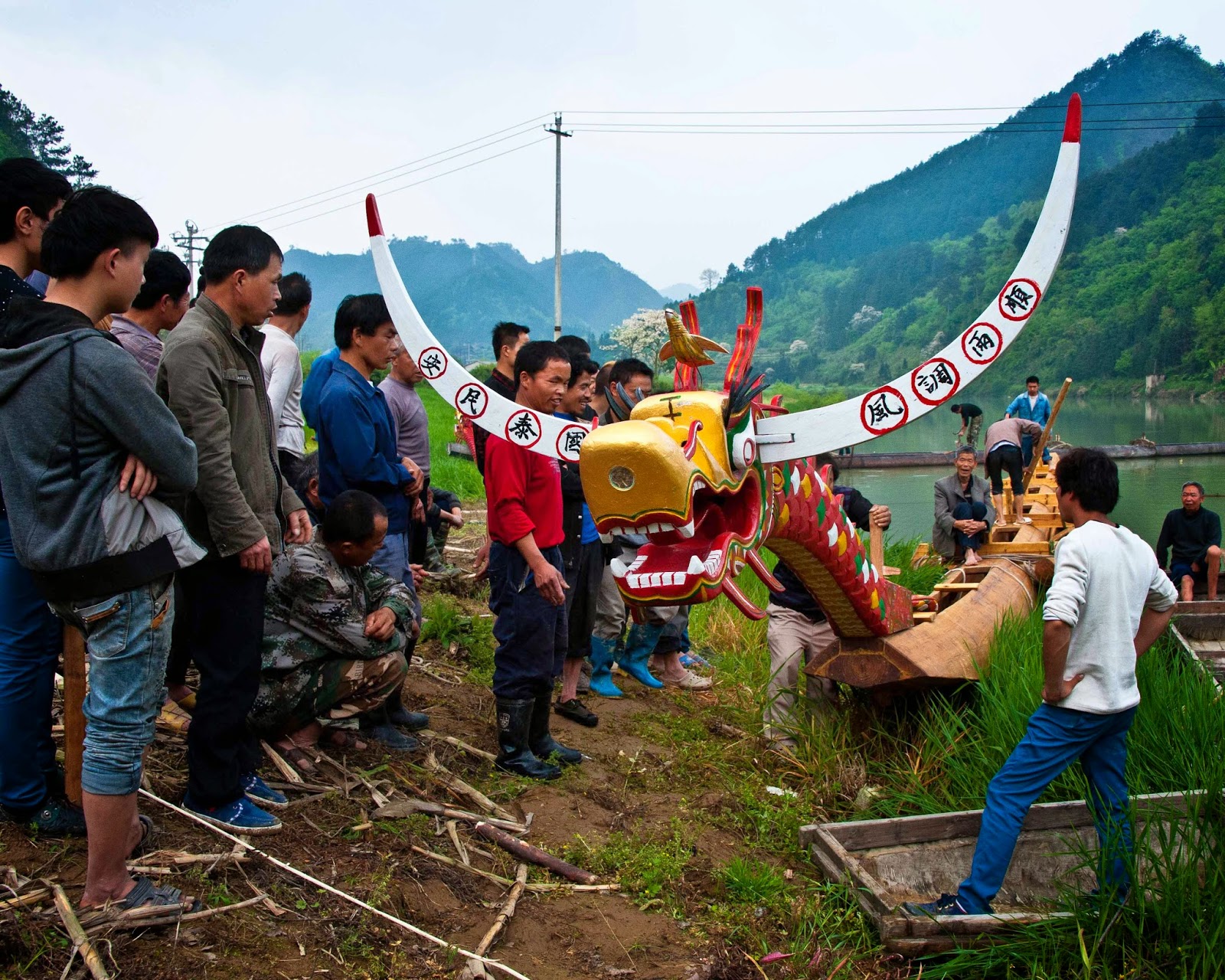 At last everyone stood back to admire their work.

Meanwhile, all the boys in the group had taken to the second, much older dragon boat for games. 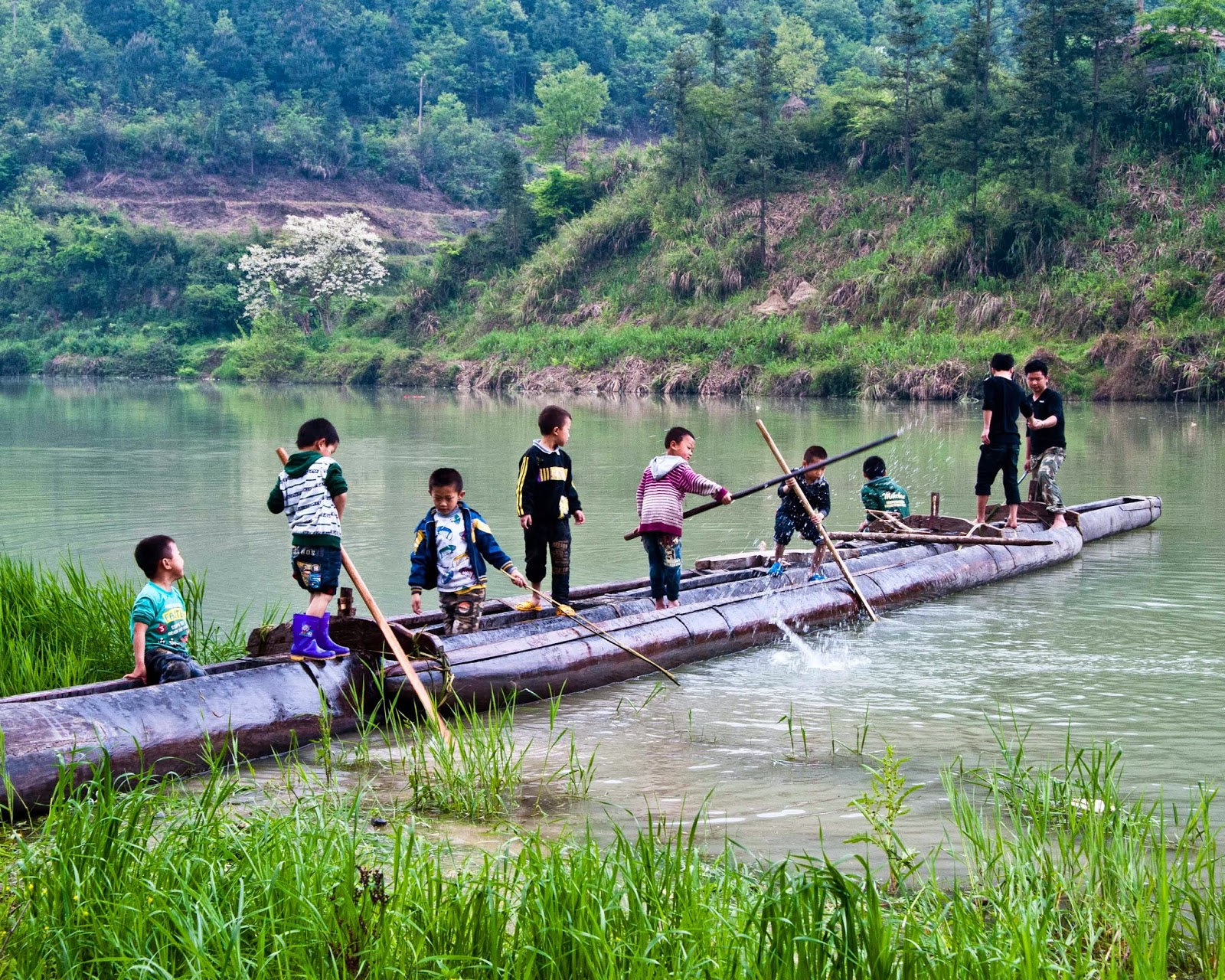 The second dragon boat lacked a head, but it soon arrived balanced singlehandedly on the shoulders of the village strongman. 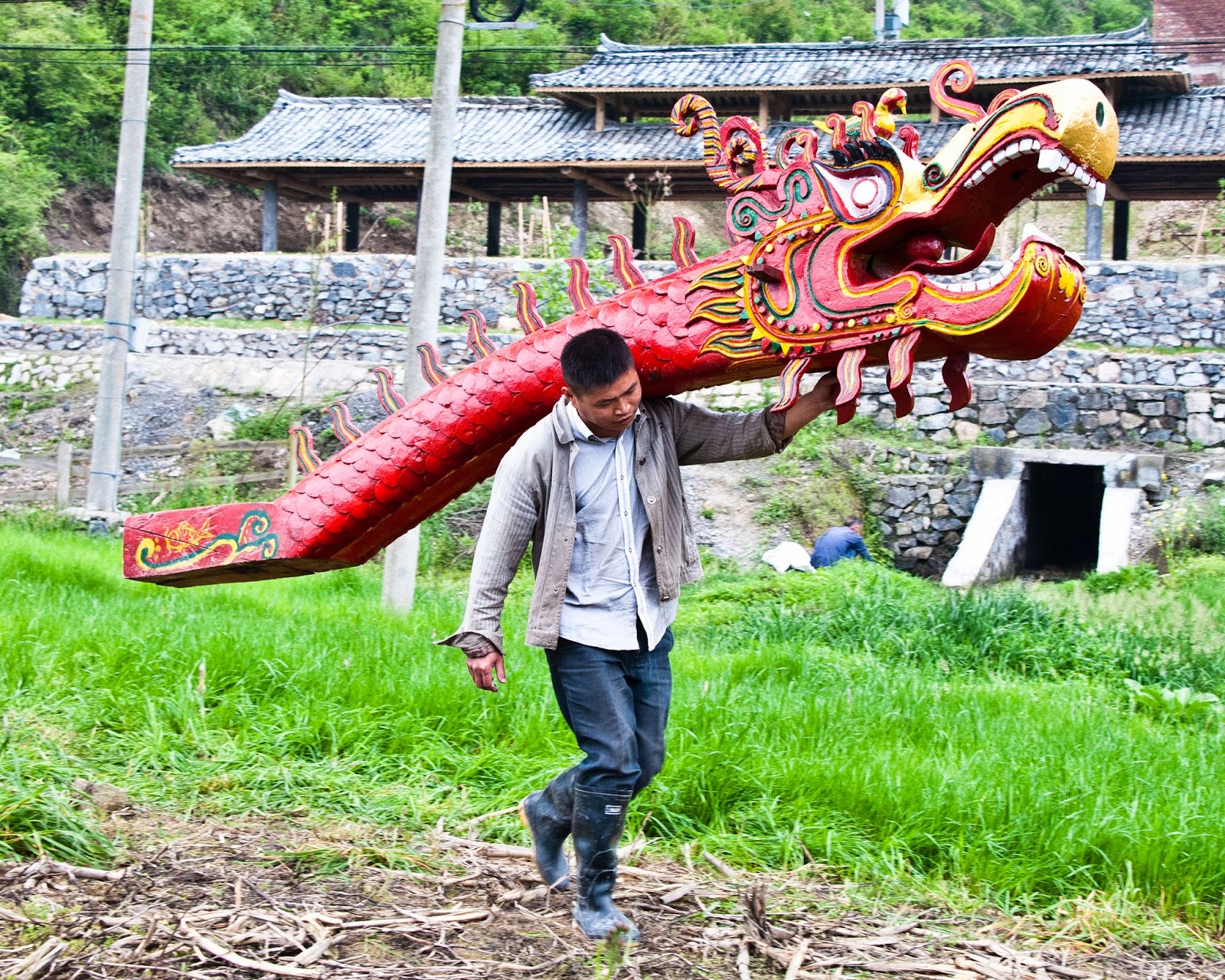 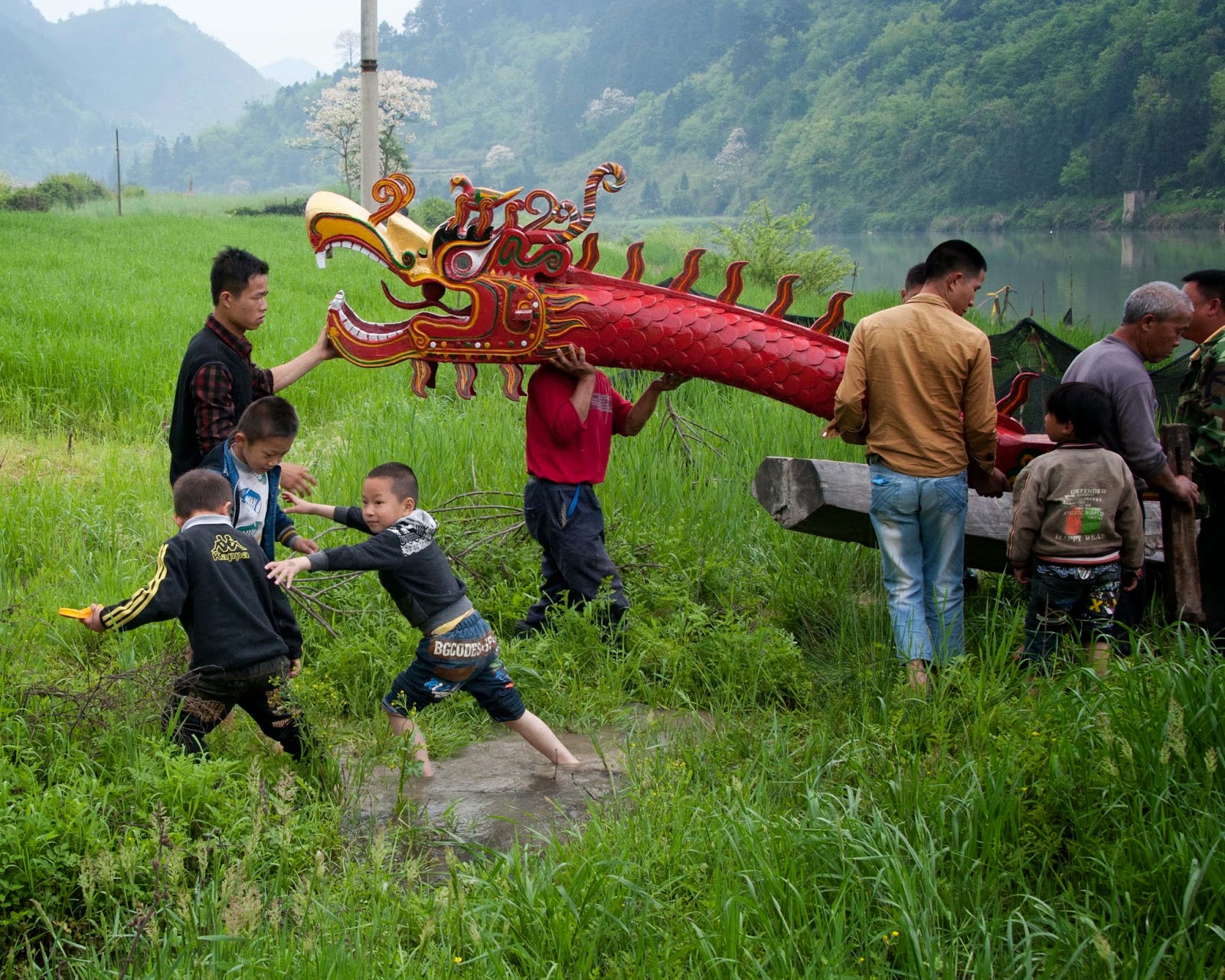 The head in place, we learned finally that the boats would be racing in two days' time in celebration of the Sister's Meal Festival in nearby Laotun village. The boats looked magnificent, and the race would be such an exciting conclusion to seeing the two boats constructed. Billy thought we had a good chance of catching the race on our way back to the celebrations. We said goodbye to the men, and made our way on to the markets in Shidong.

Serendipity, of course, doesn't always work out in the traveller's favour. Two days later we passed the same spot in the river to find we had missed the Dragon Boat by a matter of minutes, mostly because we were delayed by stopping to help a local family get their van out of a bog. For them it was serendipitous, for us, not so much.

But we did get to see the magnificently decorated boat being awarded the winner's banner with all the local women dressed in festival finery. 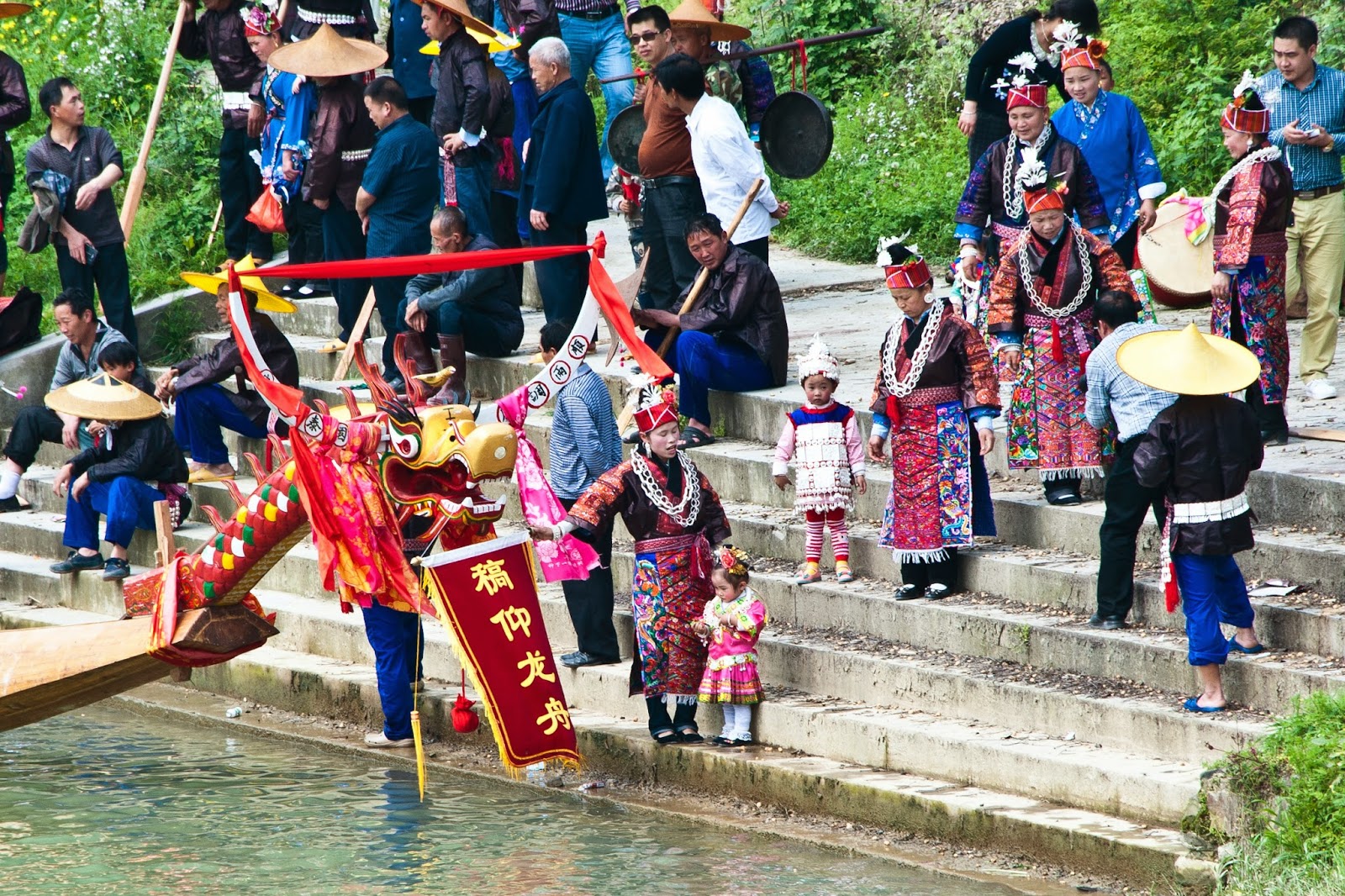 While the losing dragon boat paddled its lonely way back down the river. 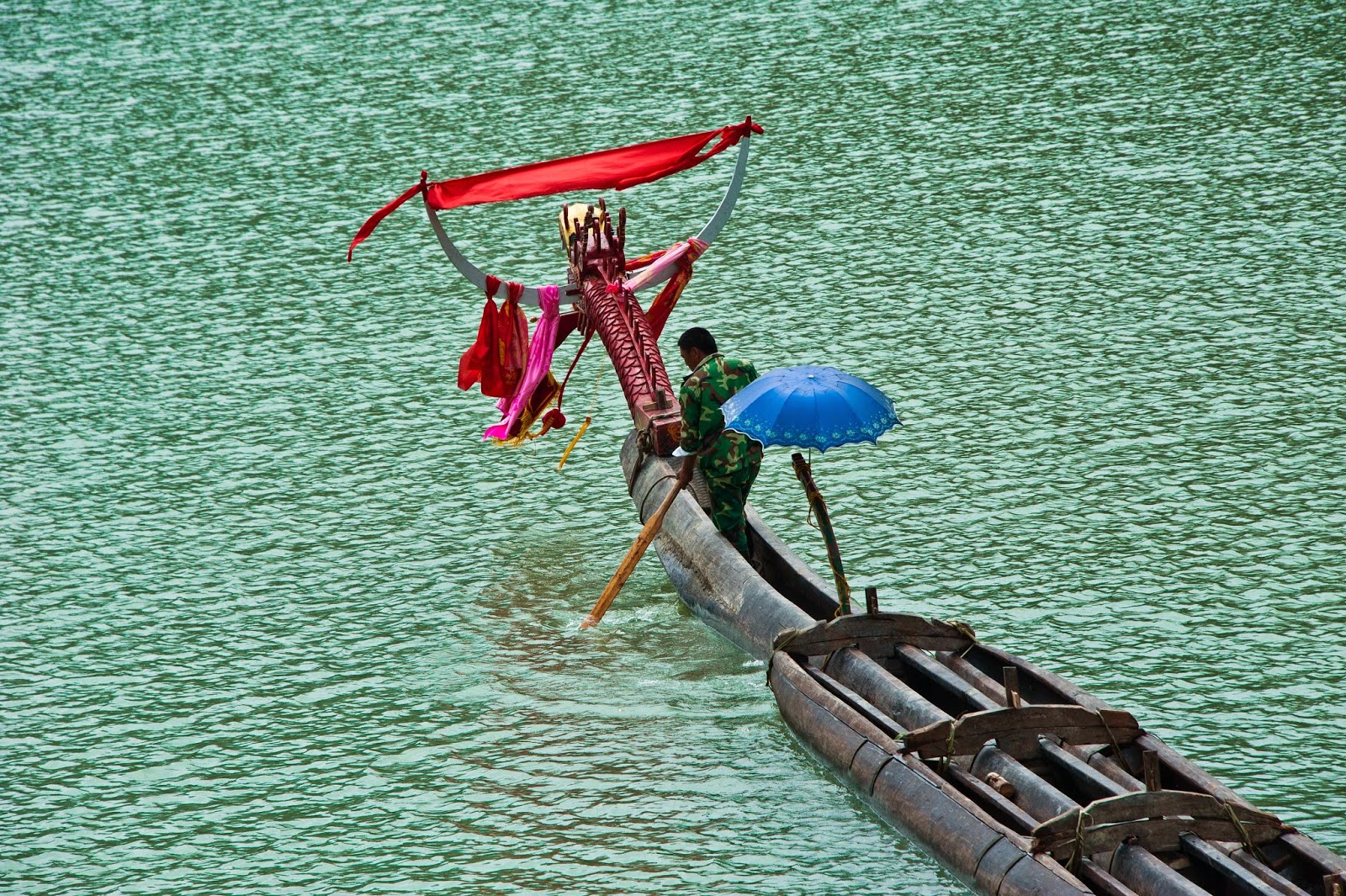 So now tell me - what has been your luckiest travel encounter? Did you follow your curiosity? How did it turn out?