'Are you from Singapore?' the man at the petrol station asked me.

'Singapore?' I said, wondering what part of my fair skin, freckles and light hair looked exactly Singaporean. 'No, no, Australia. Ao-da-li-ya'

'Australia!' he repeated, but mixed up the syllables so that it came out sounding like Italy in Chinese.

'Yes! ao-lo-di-yi!' I'm pretty sure that was an entirely made-up country just for my benefit. Australy. Itstralia.

'Yes!' I said, handing over the money. 'Very big! Not many people!'

Meandering south from Leshan's Giant Buddha, we entered the long river valley of the Dadu River in southern Sichuan, a place very similar to my standard description of Australia - very big, and not many people, even fewer of whom seemed to have heard of my home country. Perhaps it was my accent.

The area was remote and beautifully wild - tall craggy cliffs rising vertically from the river bed towards the sky, with plummeting narrow waterfalls rushing back down to the river at intervals. In such remote and mountainous country flat land for farming was scarce. 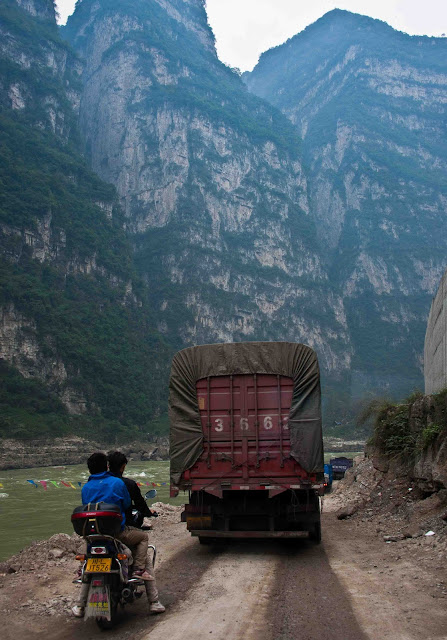 I thought, mistakenly as it turns out, that we had covered all of China's worst roads in Inner Mongolia, Xinjiang and Qinghai. But Sichuan had saved the worst of all for us - a 68km stretch of rocks and mud weaving in and out below the construction of a new riverside highway, alarmingly punctuated now and again by landslides.

The road, if I can truthfully call it that, was only one lane wide, so we drove in a caravan between trucks until there was a slight widening, then stopped so the caravan of trucks and cars travelling in the opposite direction could pass us. The going was painfully slow.


The road also welcomed us with a sign saying:

which we neglected to photograph on the grounds that it might later incriminate us.

'Are you an alien?' I asked my husband.

'No!' I said, as we both failed to make eye contact with the police patrol parked under the sign.

'I'm sure they'll let us know if we're considered aliens' we decided, knowing full well we might be turned around at any minute by the men in black. Except turning a campervan around on a single lane mud track when there are sixty impatient trucks banked up in both directions was always going to be tricky. At least, that's what we were counting on.

That 68km section of road took eight long exhausting hours to traverse, and as you can well imagine there was nowhere to camp that wasn't already occupied by a construction crew or a broken-down bus.

Amongst all of this, the town of Ebian rose up like an oasis. More accurately, Ebian peered through a dense fog of pollution from the nearby nickel smelters and factories, sitting at a sharp bend in the Dadu River and clinging to the steep slopes of the riverside hills. It twinkled at us in the growing dark, beckoning us to come and find a guest house or hotel, a more attractive option than camping at the petrol station amongst people who confused Italy and Australia. 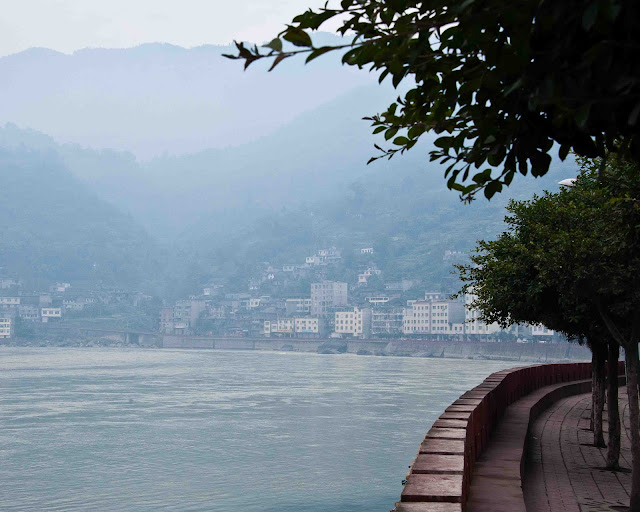 We wound down the steep and twisting road into the centre of town, utterly chaotic with a mayhem of tricycle taxis, blaring music, horns, and bright flashing lights, a place that was rapidly outgrowing itself and hadn't worked out yet what to do with all the surplus people.

The surplus people, meanwhile, had suddenly spotted us.

Fifty incredulous faces watched us park, then watched me get out of the campervan to ask about rooms at the tiny hotel across the road.

In the lobby three young women wearing suits were playing on their mobile phones over a scale model of a new Ebian housing development. They looked up in unison and their jaws literally dropped. Perhaps I was an alien after all.

This made me feel a little uncomfortable, but not nearly as uncomfortable as the process of registration which involved twenty very interested locals crowding the hotel's small counter and shooting me with a battery of questions:

'Where are you from?'
'What's your job?'
'How much do you earn each month?'
'How come you can speak Chinese?'
'Are those your children outisde?'
'What did she say?'
'She's from Australia. Monthly income 10,000 renminbi. Two daughters.'

Our passports did the rounds of the crowd.

'We don't have any foreigners here!' the teenage girl manning the desk told me. This reassured me not at all, but as yet the local police had shown no interest in us and we wanted to keep it that way.

For people unaccustomed to aliens, Ebian's locals were mighty keen to get to know us. A tight crowd followed us around the small night market until we found a restaurant that looked clean and welcoming, but as we sat down the rosy-cheeked waitress took one panicked look at us and ran off, returning five baffling minutes later with the owner, an older man.

'Yes, we can' I answered, in Chinese, at which the owner turned to the waitress and scolded her for pulling him away from his TV show to come and speak a language to these foreigners she could clearly already speak.

She blushed and giggled and then sat herself down at our table, and in the most incredibly rapid-fire Sichuan dialect said:

'So!' she continued, with scant pause for breath, 'Where-are-you-from-where-do-you-live-do-you-eat-spicy-food-how-much-do-you-earn?'

'Can we order some dinner first?' I asked.

By now, all the other kitchen staff and the owner were also seated at our table, along with their kids, waiting to hear the answer to her questions.

So we ate dinner, and in between bites tried to answer everything they wanted to know - how many square metres our house in Shanghai was, whether we thought Sichuan was better than any other province in China, and why we were able to eat spicy food, despite everything they'd heard to the contrary.

The next morning, by now familiar with everyone in downtown Ebian, we went for a walk. What I hadn't noticed in the dark the night before was now obvious. Ebian's population is about half Yi people, the women wearing intricate beaded headresses and looped plaits. They thought we were incredibly exotic, touching our daughters' hair and skin, but we felt like very shabbily-dressed...well...aliens. Strangers in a strange land. 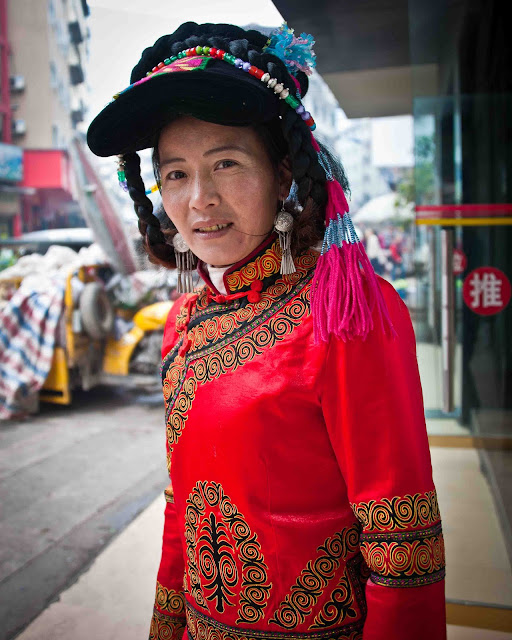 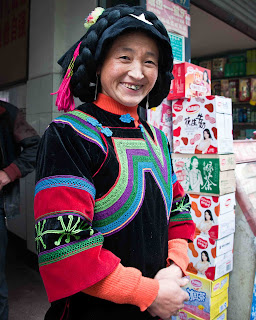 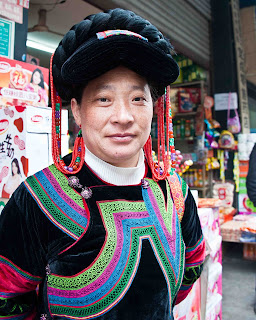 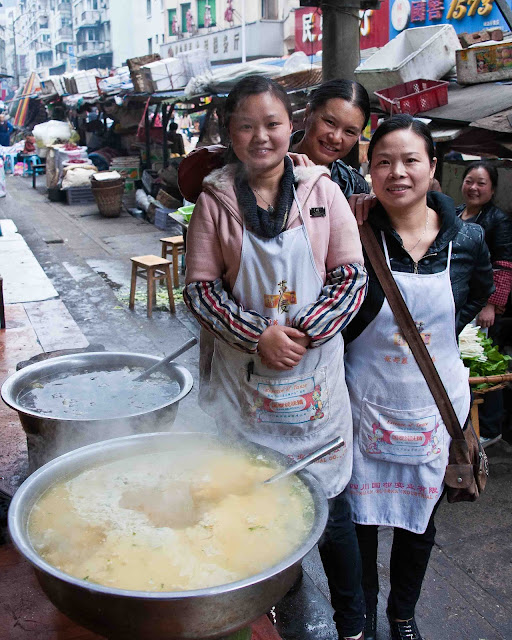 For a touch of familiarity we ate breakfast at the same restaurant as the night before, where our rosy-cheeked waitress (above, left) whizzed between tables filling in the other customers on our particulars and answering questions on our behalf. I was ever so grateful.

I never did find out whether we were actually allowed to be in Ebian or not, or why that particular area might have been restricted to us. But should your craft ever land there, a friendly and curious welcome is guaranteed.


Where is Ebian?
Leshan County
Sichuan Province, China
Practically in the middle really. 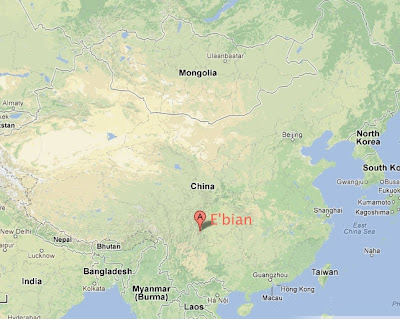