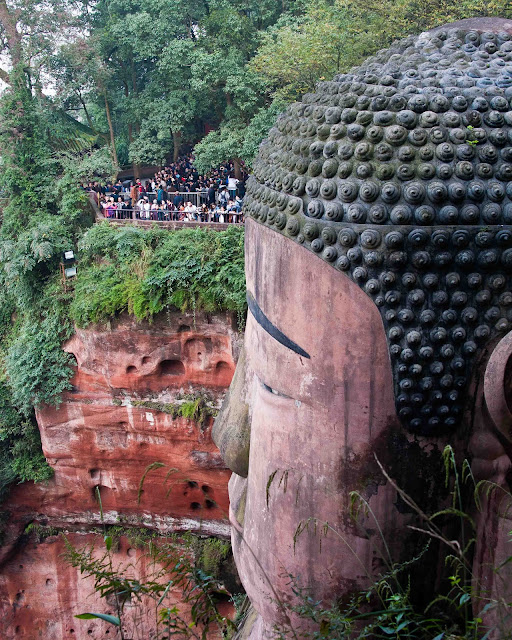 I like to think as an Australian I have a degree of expertise in large things, because my home country takes a particular pride in its 'bigs' - the Big Apple in Tasmania, the Big Prawn at Ballina, the Big Sheep, the Big Cow, the Big Mower (at Beerwah). I've climbed to the top of Big Pinepapple and ridden on the Macadamia Nutmobile (eight giant brown nuts weaving through the macadamia trees!), and walked through the middle of the Big Banana in Coff's Harbour...the list is endless. Kitsch they may be, but they're colourful and hey, they're BIG.

All this big-ness expertise, though, left me unprepared for one of China's bigs. Turns out the Chinese have been doing big since AD713, when monk Haitong at Leshan had the idea of carving a giant seated Buddha into a cliff facing the confluence of two rivers, a site with powerful currents and lethal for boats. He hoped the Buddha would be able to tame the savage waters.

The Buddha is best seen from the water amid those exact same savage waters, but we don't initially know this and decide to tackle the Buddha head first so to speak, climbing up moss-covered stone stairs through a lush green rainforest to the cliff top temple, level with the top of the Buddha's tightly curled black head.

When we reach the top though we can see bugger all - there are around two thousand people here on a weekday morning. Over the heads of the crowd I can glimpse his right eye and his nose but little else, and photo touts have commandeered the only viewing platform, charging 50 yuan to have a photo of yourself taken standing on a stool and appearing to pinch Buddha's nose. Classy.

Thank goodness we didn't try to visit during Golden Week (China's main national holiday, in the first week of October) as had been our original plan - we would have been crushed to death by the enthusaistic crowds.

Everyone is thronging to join in the hour-long queue to see the rest of the Buddha - to climb down stone steps on the inside of the cliff he's nestled into, past his giant shoulder, his massive elbow, his hand resting on his knee, then lastly his enormous feet, each toe the size of a minibus. 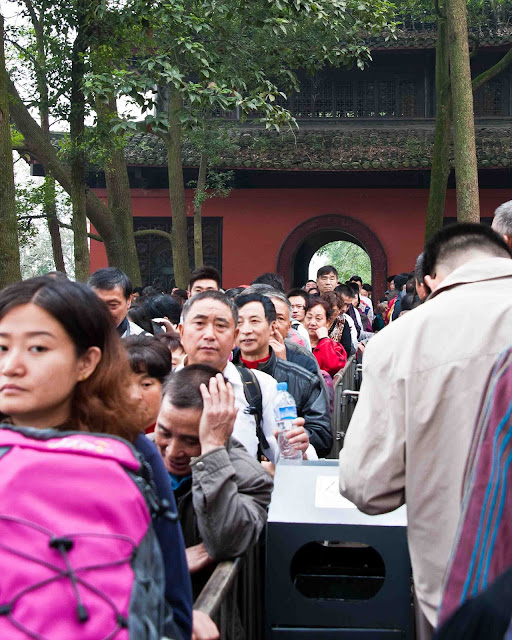 The queue snakes back and forth between eight rows of barriers and eventually we reach the front, only to find we are now pushed forward on a see of people dangerously jammed into a tiny viewing platform where we can barely breathe. We can see below us to the next platform where children and the elderly are being squashed sideways by the surging crowds. 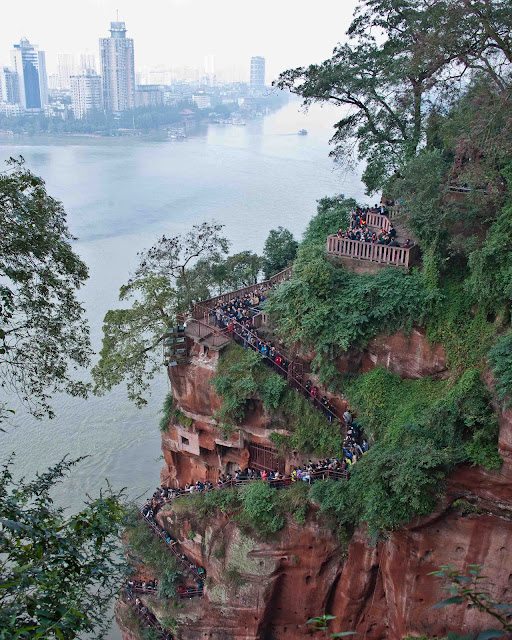 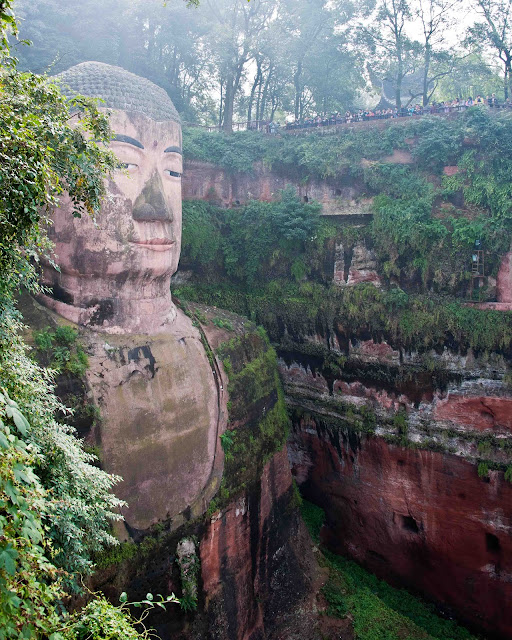 After the taking of this photo - over the heads of four Chinese women pinned between the railing and us - we hold a brief and urgent family conference, held under the armpit of a large Chinese man who is trying to clamber over us, and decide to give up and view the Buddha from the deck of one of the less crowded boats we can see below us. 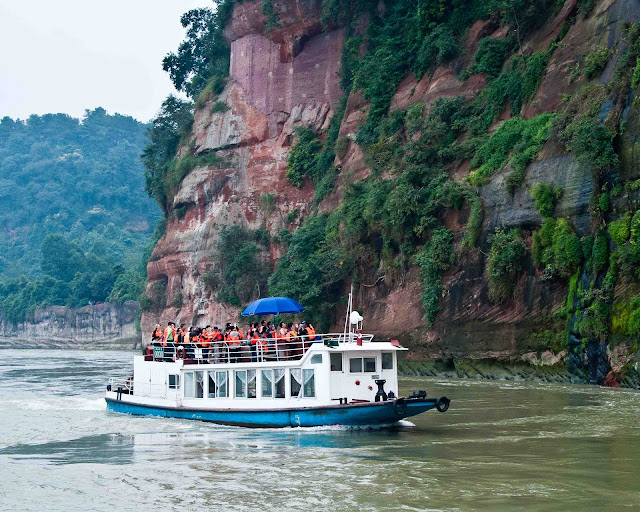 The boat is a much better plan, even though we have to hand over another fistful of money to get on one. There are even, unusually, lifejackets, and we can't board until we are each wearing one. Once we reach the Buddha though, battling against the swift current at full throttle in order to stand stationary for a few minutes, our fellow passengers abandon the ugly padded orange lifevests so their photos look better.
The view from the river gives you an idea of the full majestic height of the Buddha - his ten giant toes, truly like 'ten minibuses parked side by side' according to my daughter.

The huge elegant hands rest gently on his knees and it seems amazing that this was accomplished with human hands alone more than 1200 years ago. As the boat finally overcomes the strongest currents and we head back upstream I catch a last glimpse of  the Buddha's beatific face, calmly serene despite the ant-like humans swarming past him in a never-ending file, and the turbulent waters rushing past. 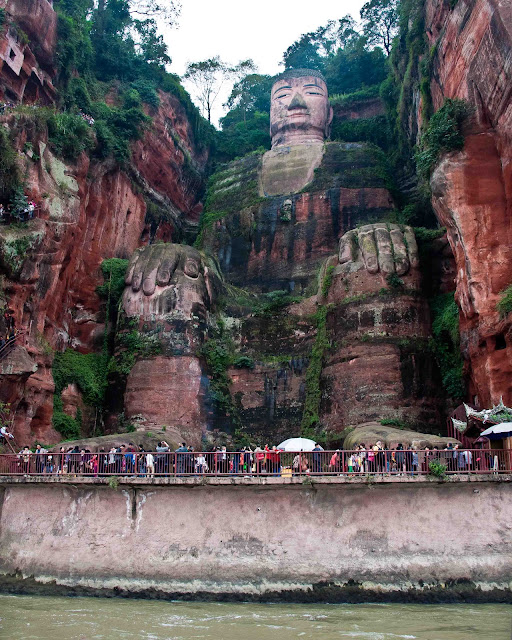 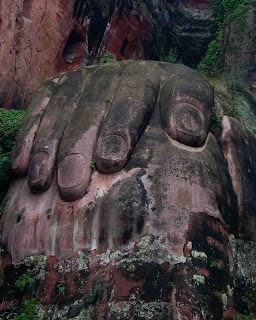 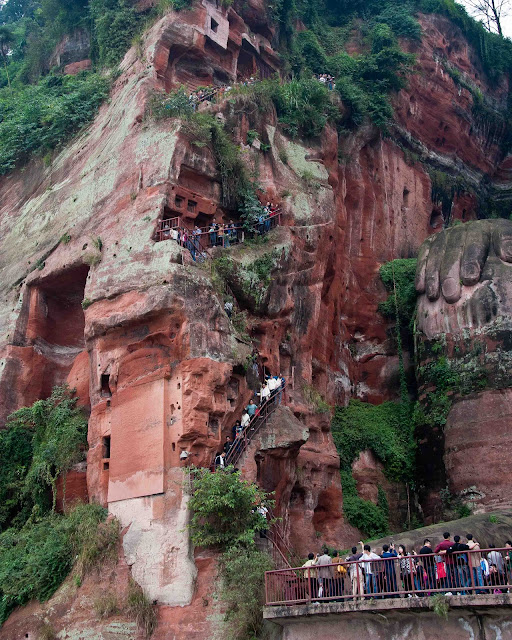 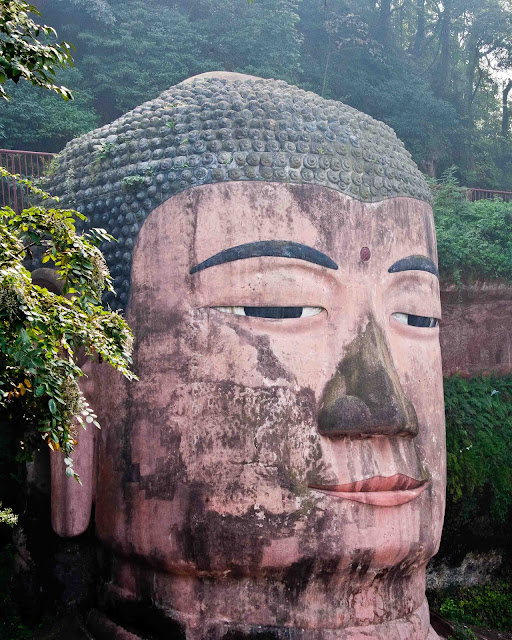