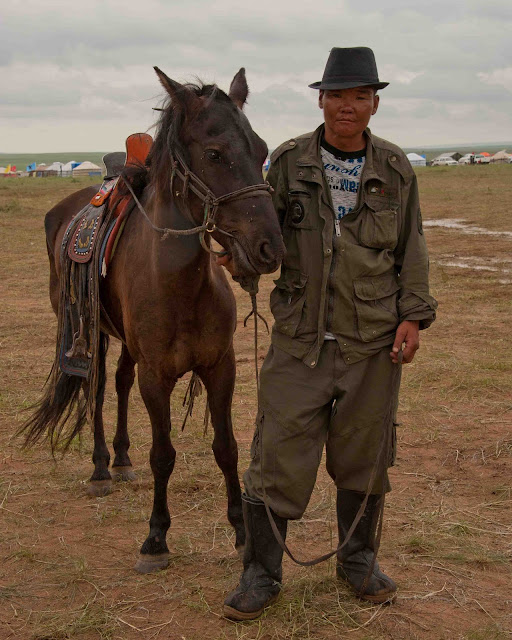 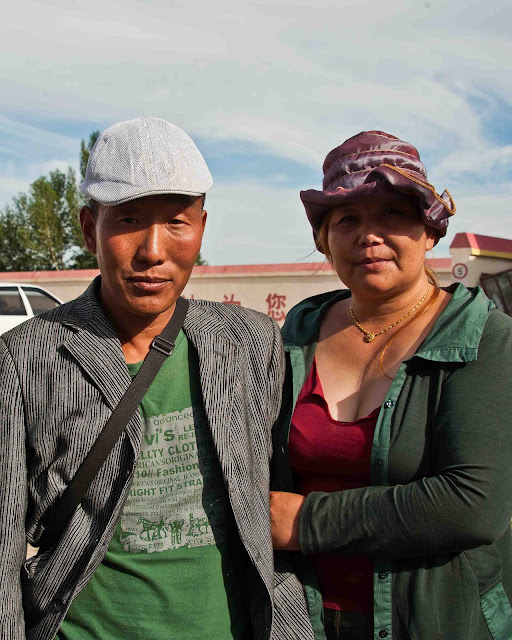 In his sparkling blue flat cap and trendy t-shirt-jacket-satchel combination, I have to admit he didn't really look like a horse herdsman, but he assured me that's exactly what he was - a mumaren 牧马人. He and his wife had struck up a conversation with me at a truck stop where he was refueling his motorbike. (Yes, this is the sad and modern truth - horse herdsmen in Inner Mongolia use motorbikes.)

I asked him if horse herding was good work.

'Oh, it's not work', he said, giving me the impression horse herding was an excellent occupation indeed. 'Where are you going?' he asked, waving at the campervan.

I told him we were travelling to Hohhot. Well, actually to Gegentala, to see the Naadam. You see, I still held out hope that after our recent near-miss we could break campervan land speed records and get there in time.

'Gegentala?' he said. 'Why go all the way there when there is an even bigger and better Naadam just up the road? It starts tomorrow!'

I felt a little glimmer of excited hope as I pulled out my map, now grubby from the dozens of fingers that had traced lines across it in truck stops just like this one. I showed him where we currently were.

He moved his finger along a thin brown line to a point west of a small dot marked Abag.

'Right there!' he said. 'Maybe....two hundred kilometres, at most.'

Now I'd suffered through a lot of blind leads before, and I wasn't going to take what he said at face value - I was fully prepared to cross-examine him to pick up the fatal flaws in his claim. This was important - if we sidetracked to Abag and there was no Naadam, then that was it, curtains, our chances of getting to Gegentala in time exactly zero. It was a big risk to consider.

'It's a great Naadam with a very local flavor....' he said, just as I began to work out what my cross examination questions should be, maybe something along the lines of and what colour is your favourite horse?

'.....and there are never any tourists there' he said, somehow innately knowing that the bane of any tourist's life is a bunch of other tourists. Well, he might as well have said they were handing out free thousand dollar bills. I decided we should go immediately. No further questions, your Honour.

We headed to Abag, 200km by road, a mere trifle on the motorways of Europe, but equivalent to six or eight hours of hard slog on Inner Mongolia's back roads. Already nearly dark, we stopped overnight in Xilinhot, a brightly neon-lit city-in-miniature with the fastest growing GDP in the China, thanks to rare earth mining nearby. Who would have known all those riches were sitting underground?

After the crushing disappointment of missing Naadam by several days in Haila'er and again in Zhanglengqi, I was determined we would catch every single second of this Naadam, so I woke everyone early and got them into the Naadam spirit with a hearty breakfast, and a few songs, and we hit the road.

Within a few short minutes it had begun to rain, the sort of serious rain that causes cancellation of things. But I knew these Mongolians were a hardy bunch, stalwarts who could withstand subzero temperatures for months in wintertime. Rain, to them, was nothing.

By now the wind was picking up too, as we stopped just outside Abag for fuel. It was raining so hard torrents of water gushed across the driveway of the fuel station. I asked the fuel station attendant, like everyone I met, about the Naadam.

'Yes, of course there's a Naadam!' he said. 'But all this rain! Why not relax in town, have lunch, and go out there when the rain stops this afternoon? It will be much more convenient for you!'

That was when I noticed a long procession of cars coming back the other way, headlights on, hazard lights flashing (as the Chinese do in dreadful weather), nose to tail for as far as the eye could see.

One lone car pulled into the service station and I asked her if she'd come from the Naadam.

'Oh yes - too wet!' she says. Within ten minutes hundreds of cars have passed us back into town. Hundreds. Hundreds. All abandoning the Naadam because of the rain.

I just need to see it though. Just see a Naadam, even in the pouring rain. Even if it's cancelled. We continue westwards, by now unable to see anything but the road in front and the endless swish of the windscreen wipers. There is a lot of thunder and lightning.

But then there it is. A magical city of tents on the horizon, blue, yellow, red, a long promenade of flags, a row of yurts, and a police blockade.

'The weather is too bad!' the police tell me. 'Maybe come back this afternoon?' as they turn us around and send us back to Abag.

I'm not going to print what I said next, because it wasn't polite. NOOOOOO!!!!!

Nothing like a hearty Mongolian meal to restore your sense of hopefulness, not to mention that strengthening Mongolian beer. By now, the weather has lifted a little, and the restaurant is beginning to empty. It's time to seize our chance and get back to the Naadam. I've waited. I've hoped. I've worn the patience of my family thinner and thinner. This had better be good!

And it is. We step out of the campervan and straight into a crowd of wrestlers heading for a match in the main arena, splendid and also slightly ridiculous in traditional wrestling dress. Like a scene from Camelot, the arena is magnificent as the sun pushes through the heavy dark clouds, illuminating the flagged pavilions and the stadium.

I'm going to stop talking now and just let you enjoy the atmosphere, a riot of colour and spectacle, worth every single frustration of the last two weeks spent chasing this damn thing all over the countryside. 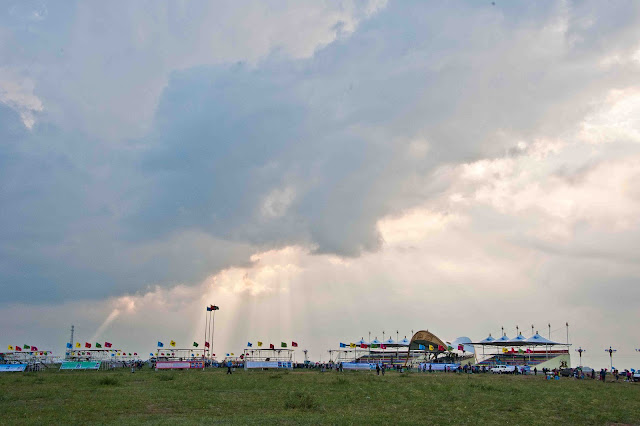 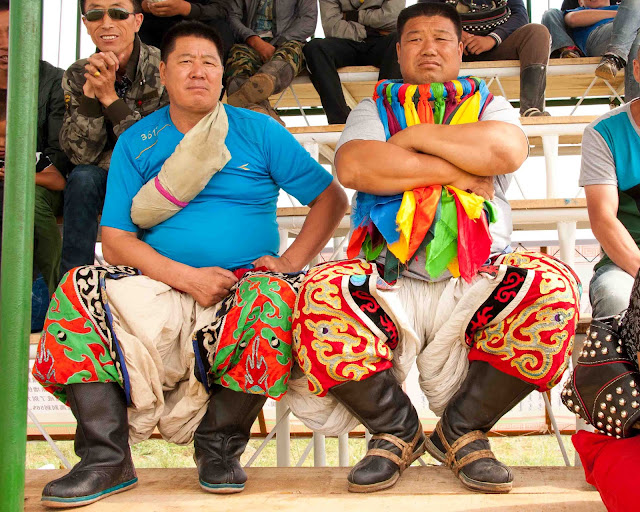 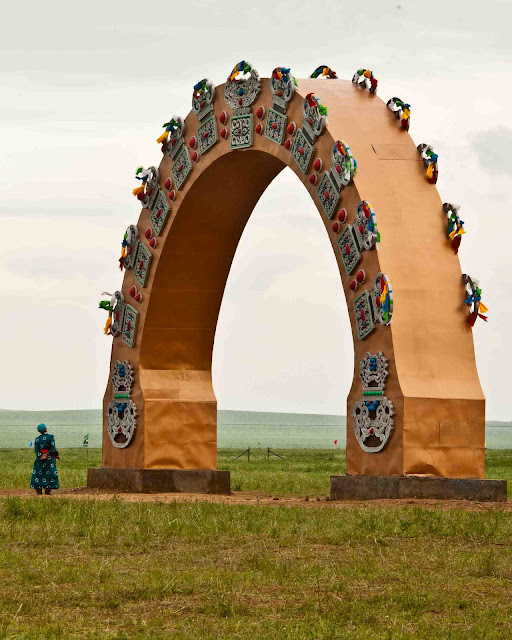 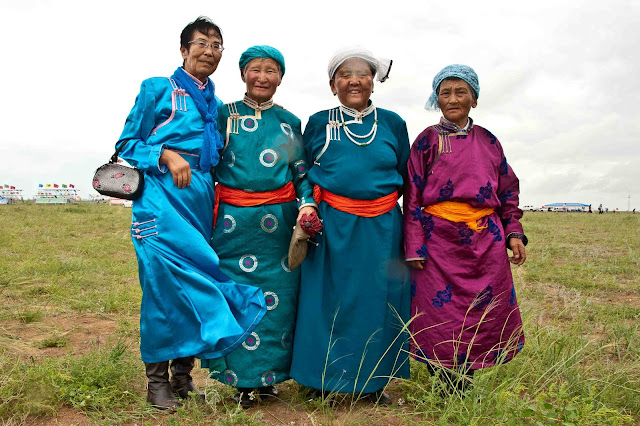 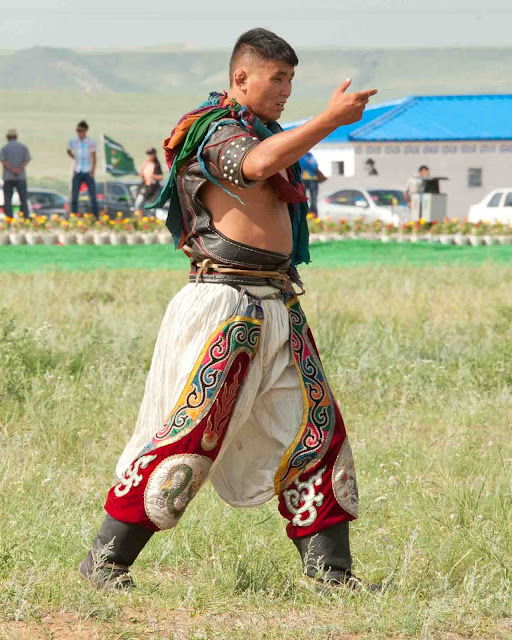 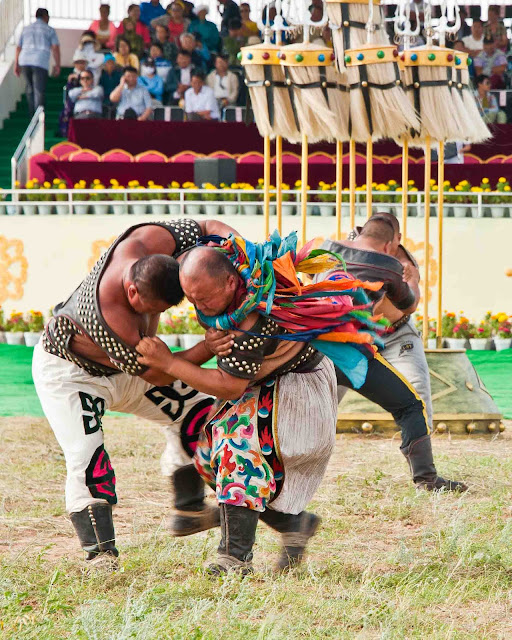 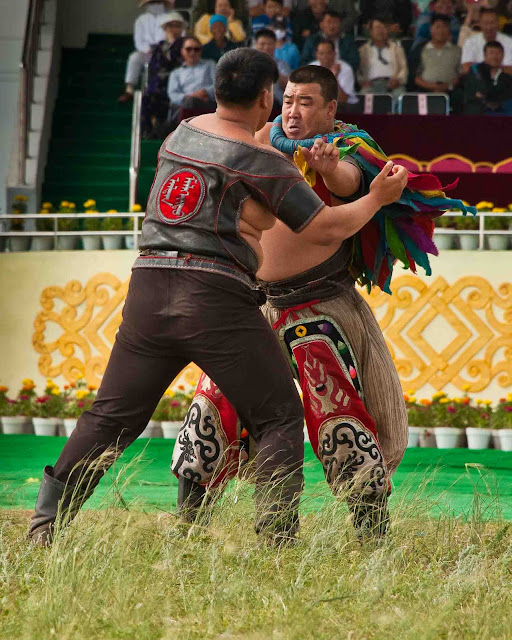 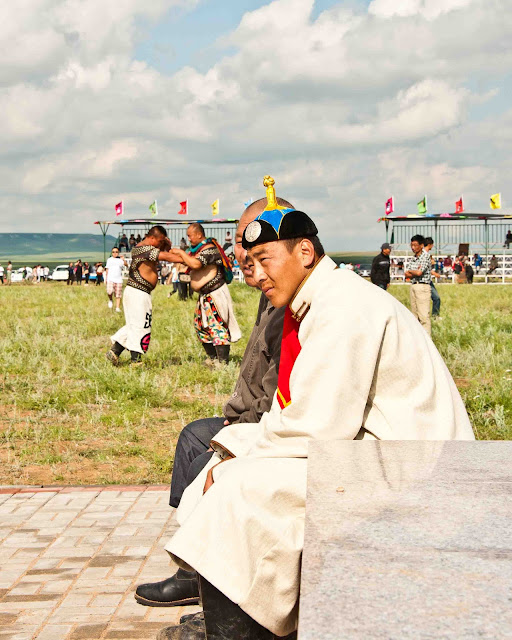 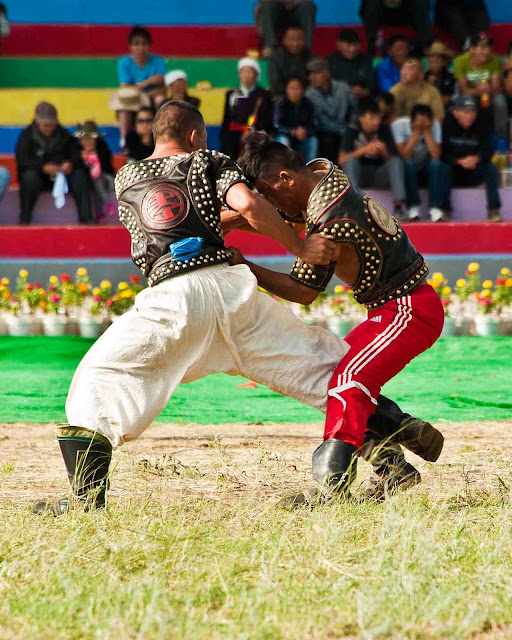 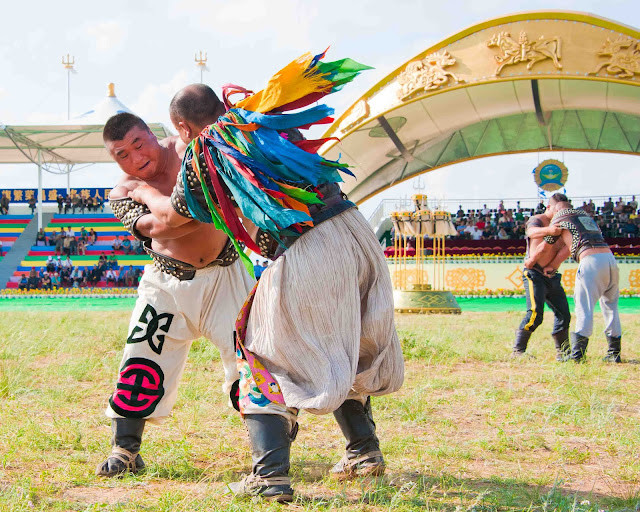 Wow. Those pantaloons are really something! Naadams traditionally include three 'manly sports', the other two being archery and horse racing. I would love to have seen both of these events, but I could never quite pin anyone down as to whether the archery had already occurred, or was likely to occur  on subsequent days, or had been cancelled due to bad weather. The same went for the horse racing, a single long-distance race which finished at the arena. 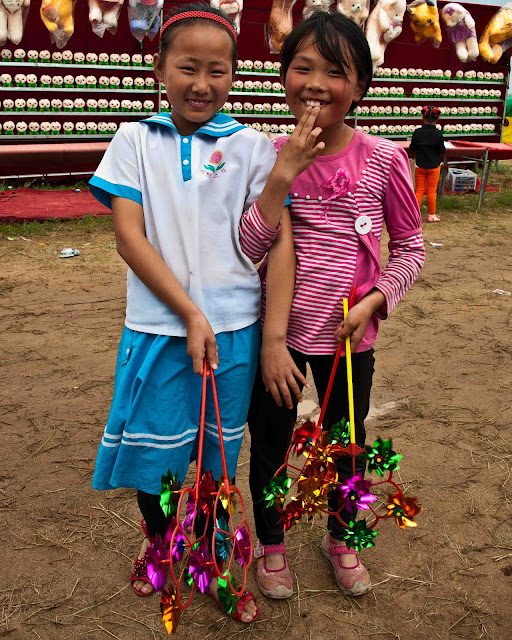 Even more entertaining than the sports, sideshow alley at Naadam is both familiar and at the same time bizarrely novel. Hoopla games, the simplest yet trickiest of carnival games, are given a unique Inner Mongolian twist with all the prizes (live rabbits, grotesque plastic jade vases, or cash) laid on old carpets on the dirt.

Then there are pyramids of tin cans filled with cement, to be knocked over with a basketball, or rows of stuffed toys to be knocked off with bags stuffed with beans. Everything has a makeshift, rundown air but the lack of polish isn't affecting anyone's enjoyment. 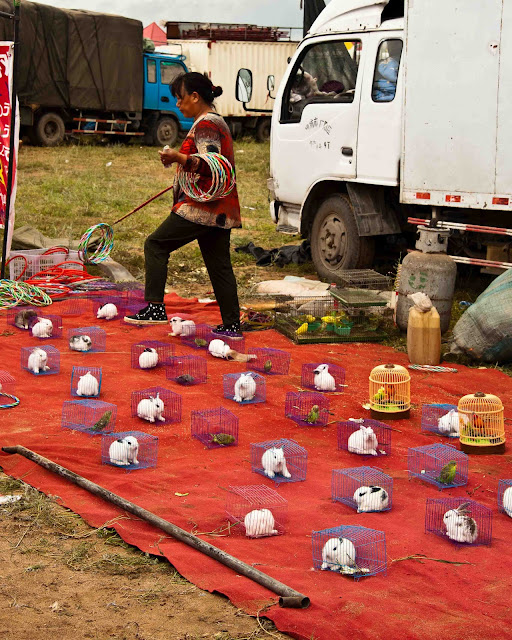 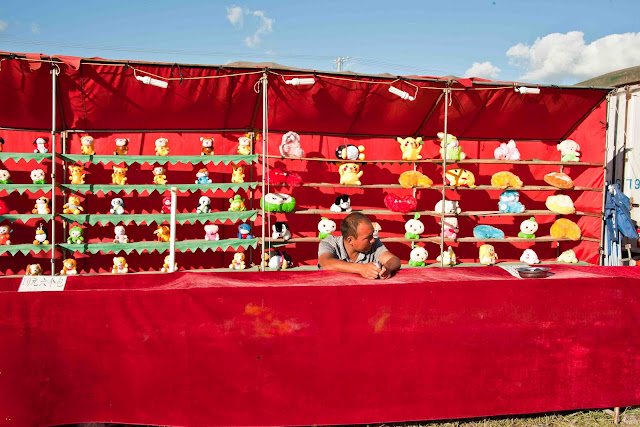 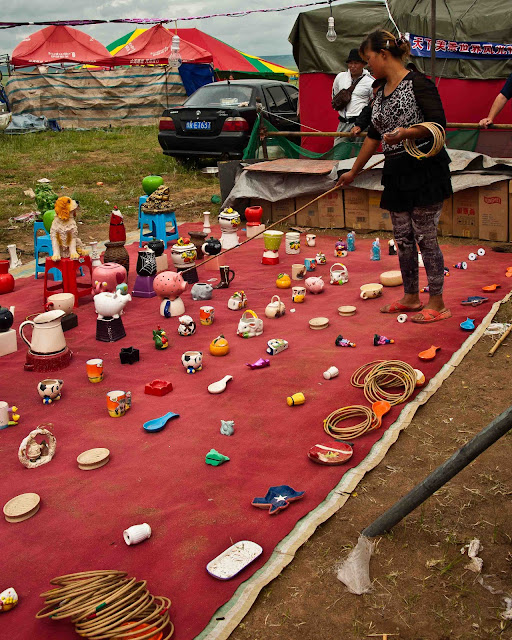 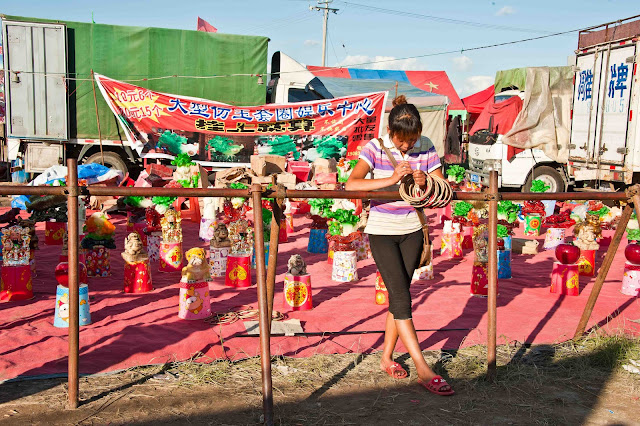 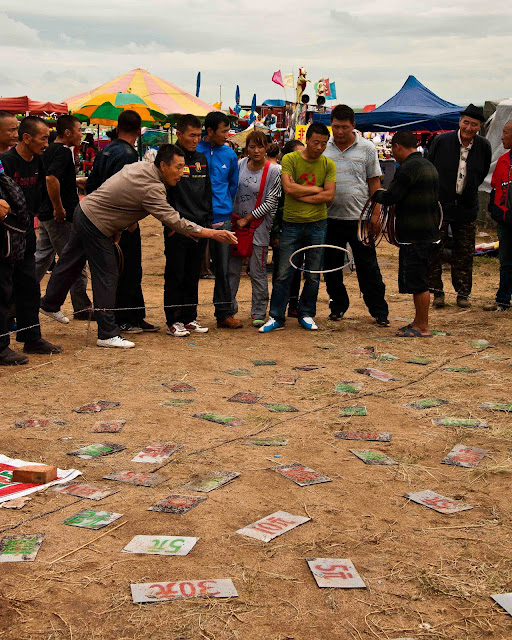 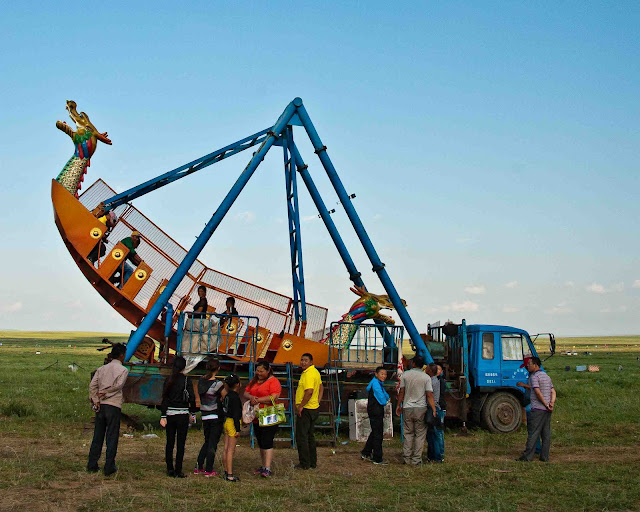 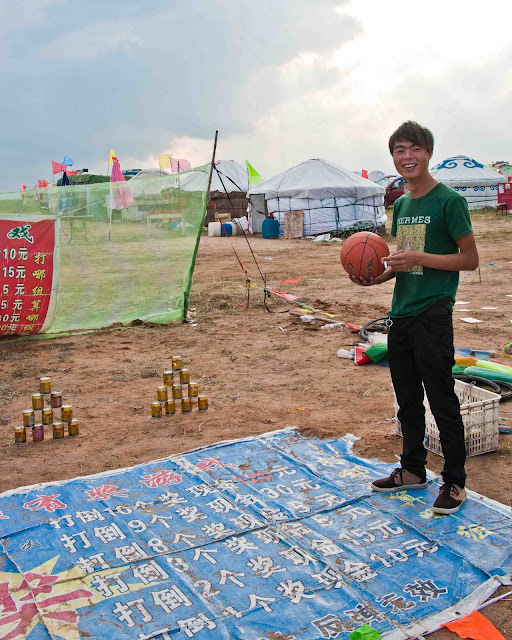 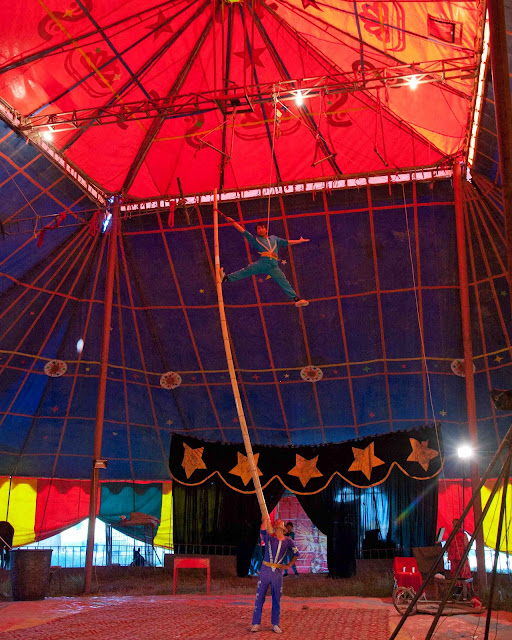 What would sideshow alley be without an amateur circus? The brightly coloured tent is manned by a spruiker with that patter familiar to every carnival goer, the lips pressed close to the microphone, the words running into one another. I can't really know what he's saying most of the time because he's speaking Mongolian, a wonderfully musical language so different from everyday Chinese, but
what I think he's saying is this:

'Come-in-come-in, come one'n'all, here's the best, the greatest, the biggest circus show on earth you, yes you, friend, come in and join the crowd we've got dazzling dangerous highwire acts and extraordinary and daring juggling, live animals and....you! YES YOU! Foreign friend! Where are you from, from America, from France, from...'

At this point the monologue is interrupted by the arrival of a long haired goat who has wandered out from inside the tent to see what's going on.

The spruiker stops briefly to glance sideways at the goat and yell something to his offsider then continues on, looking about with slight disorientation until he spots us again in the crowd.

'Oh! Even foreign friends want to see our circus, come in! Come in! Everyone welcome in the great and grand cirrr-cus!!'

We go in. Concentric circular rows of broken and chipped plastic bucket seats line the rickety stands. We take our place next to a man in a cowboy hat, and an old guy with no teeth, both smoking heavily. 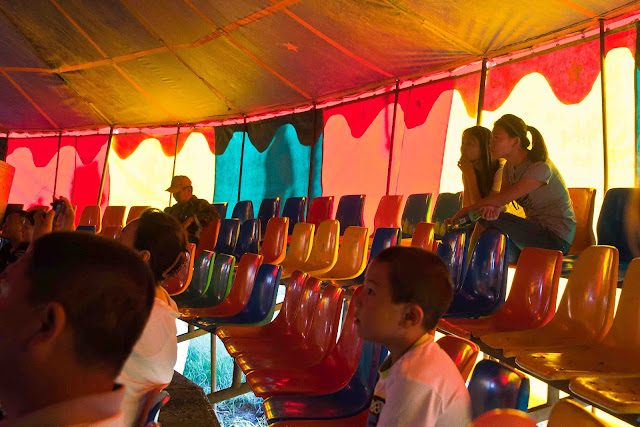 The acts have the small audience transfixed. There's a man with a whip, cracking the top off a beer bottle, another man balancing on a bamboo pole balancing on another man's shoulder, a dog who can do maths, and a lady unicyclist who can juggle four plastic rings with a tower of china bowls on her head. These are the best kind of circuses, where it's not so hard to imagine that you too could perform like this if you just had the time and the balance. 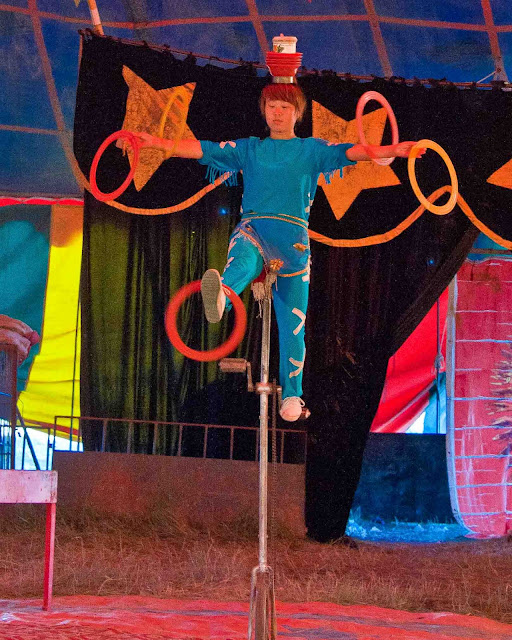 After the wrestling was over I took a wander up and down the rows of gers, or yurts, in an area to the side of the main arena given over to eating. Low and sturdy, swathed in heavy felt or canvas and wound round with rope, you enter through a low brightly painted door into the dim interior. The choice of food is sadly, unexciting - lamb skewers or noodles - but you do get to sit in a yurt while you eat.

If beer drinking is your thing, you'll find no shortage of recently victorious wrestlers happy to share a celebratory drink with you. 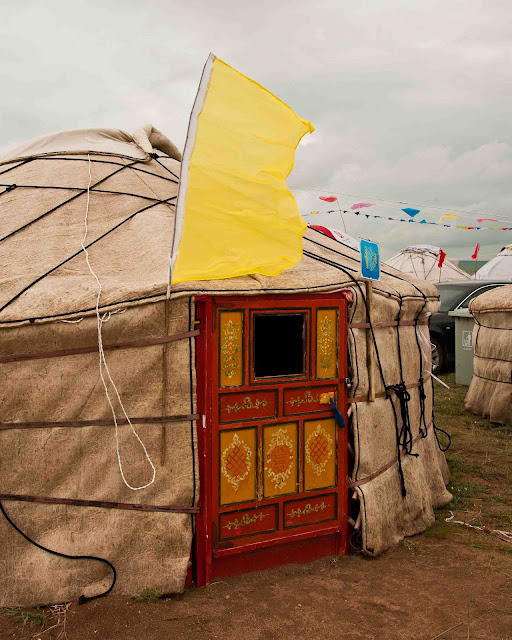 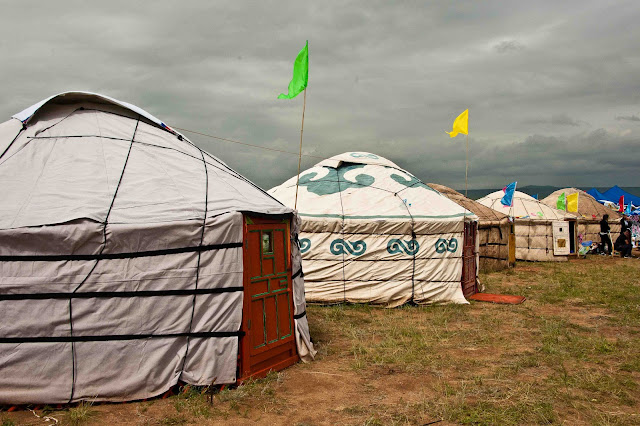 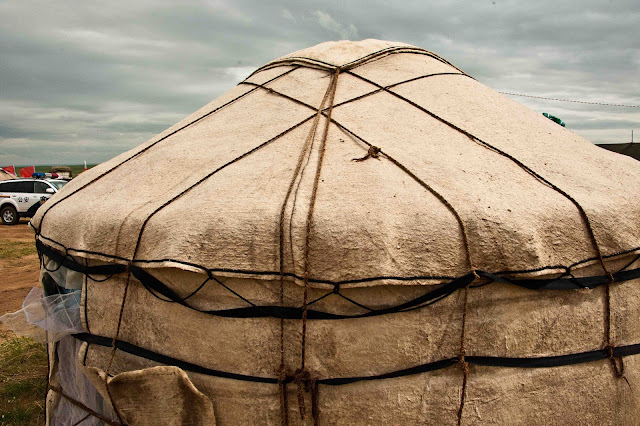 Five things I know about Naadam in Inner Mongolia: 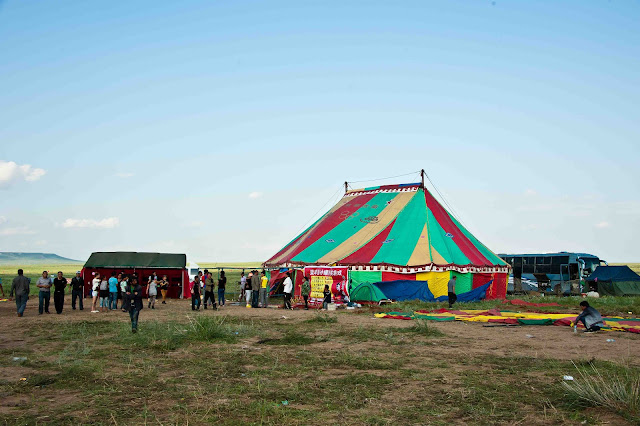 I can now share with you the very little wisdom I have about Naadam. It's not much, and it's certainly not impressive, but here it is in case you ever decide to chase a Naadam for yourself. If you ever get the chance and your time is measured in weeks rather than days, go, go, go.

1. The starting date of Naadam, to add variety, changes every year according to the phase of the moon. It's also likely to change depending on the distance you are situated from it and the number of farmers you speak to.

2. Naadam goes for three, five or seven days, except when it lasts for longer.

3. The first two days are always the best, and so is the last day if you are able to discover when exactly that might be.

4. The schedule of events may change according to weather, whim, or horse availability. Rain delays everything. Few people other than the competitors and judges seem to know what happens when.

5. If a horse herdsman gives you a red hot tip, go with your gut feeling. It'll be right.

There are many more Naadams I heard rumours of, but these five were the most consistently mentioned by locals.