Chasing Naadam Part 1: Catch a Naadam by the Tail 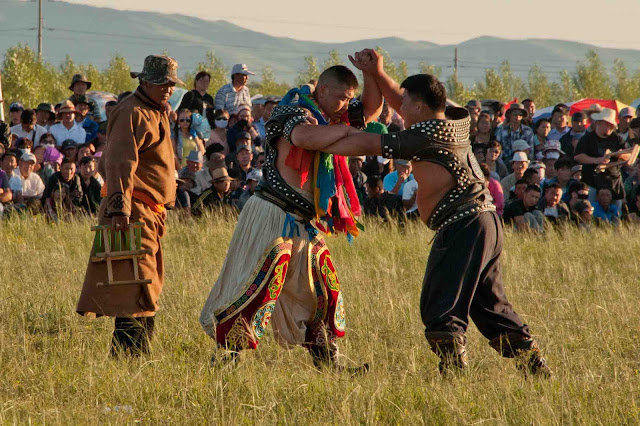 As ephemeral as a puff of smoke and as thrilling as a bullfight, Naadam, the legendary sports festival of the Mongolian people, is a riotous carnival of wrestling, horse racing, archery and sunshine. If you can find the damn thing, that is.

I started dreaming about Naadam months ago, when it seemed our journey north could be re-routed to coincide with the biggest Mongolian festival of the year, a festival I knew little about except that it involved horses and bare chested men. Sounds fun, right?

But our epic, frustrating and often fruitless journey chasing Naadam was so huge I've had to divide it into two thrilling instalments, the first today and the next on Monday, so be sure to catch both!

In trying to pin down a Naadam we were fairly certain there was one in the Gegentala grasslands, north of Hohhot, which reliable sources said runs from July 25th until July 31st each year. In retrospect, we should have driven directly from Shanghai to Gegentala and camped right on Gegentala's doorstep for two or three weeks straight, to be certain of catching Naadam the minute it opened.

Our inconvenient problem was we had entered Inner Mongolia at the farthest possible point from Gegentala, because we'd also heard there was a Naadam in a town called Haila'er in the far north around mid-July and it sounded a lot more fun, with fewer tourists, so I figured we'd be able to get up close and personal with those bare-chested wrestlers rather than having to watch them from behind an enormous crowd. We could catch that Naadam first, then hot-tail it 1600km to Gegentala in a week to see it all over again. That was, of course, until we encountered the actual roads of Inner Mongolia, (where a speed of 30km an hour is optimistic going) and our plans all came unstuck.

So we headed towards Haila'er, chasing one seemingly white hot lead after another, only to be told the Haila'er Naadam was cancelled. Or that it started two weeks before and was already over. Or that it started in three weeks' time. We chased our tail, round and round in circles.

We scoured the internet, made phone calls, sent emails, searched guide books and asked everyone we met from goatherds to shepherds to horse herders, but one tip after another led to a dead end and solid advice was completely overturned by the next person you spoke to. Finally, in complete and utter frustration, we took a side trip to A'ershan for a day to regroup and replan. Haila'er was still a whole day of driving away, on bad roads.

In A'ershan I managed to track down the name of a big hotel in Haila'er and called their desk.

"Hello, I don't speak Chinese very well, but do you have a Naadam in Haila'er this week?" (fingers crossed, toes crossed)

"Yes! We do!" (sweet, sweet relief) "It started two days ago, and today is the closing ceremony!" (crushing, crushing disappointment).

We began to think we were cursed.

We turned tail and drove westwards across Inner Mongolia like demons, pursuing the start of that Gegentala Naadam like our lives depended on it. And of course, that's when it happened - we came across a Naadam we didn't even know about completely by accident.


Catch a Naadam by the Tail 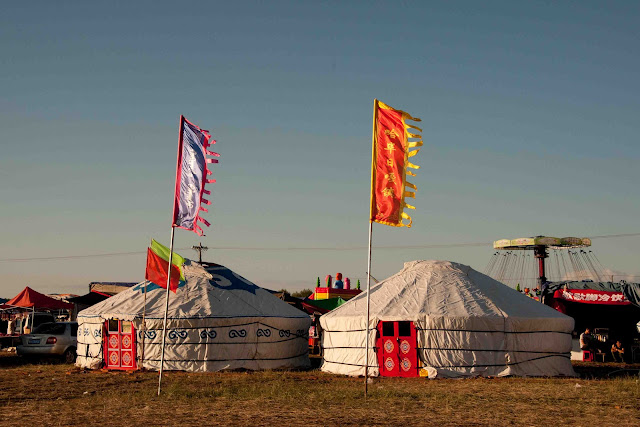 On our way back from the ruins of Xanadu the police diverted us off the main road at a town called Zhenglanqi, late in the afternoon. We thought it was yet another set of roadworks until I saw a group of brightly coloured tents and flags through a stand of trees. Could it be? Surely not.

Yes! It was! A Naadam! Our elation was palpable.

Everyone was converging on a huge grassy field on the town's outskirts. Every road was packed with parked cars, and people streamed from every direction. There was a great buzz of excitement in the crowd and we just followed on its wave, anticipating a long night ahead of games, food and who knows? Maybe even singing and fireworks.

In the gold light of late afternoon an entire tent city revealed itself, red, yellow and blue, with flags flying. Alongside the tents were rows of yurts or gers, traditional Mongolian circular tents clothed all in heavy white felt roped round and round, and entered through a single low painted door.

There was a sideshow alley with a haunted house (full of Mongolian ghosts), a chair-o-plane and a merry-go-round, all as familiar to me as any carnival in the west. Children ate fairy floss and held spinning foil windmills while their fathers tried to win giant tuffed toys for their mothers by throwing darts at a board. 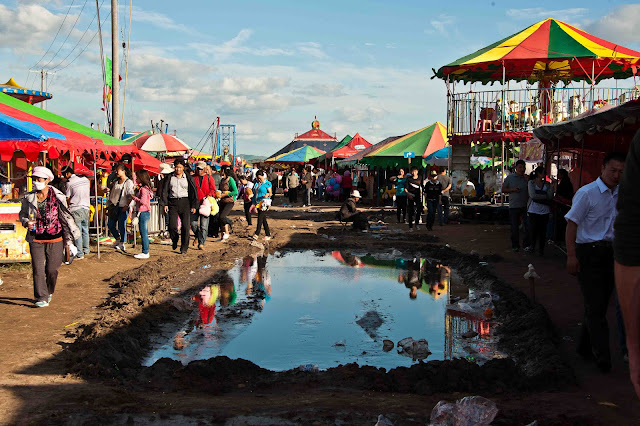 We followed the crowd and moved to the main arena, an open field facing a huge pavilion crowned with flags. In the setting sun there were eight men deep around the edge, some standing on stools or on horseback for a better view, all intent on what was occurring in the arena's centre. 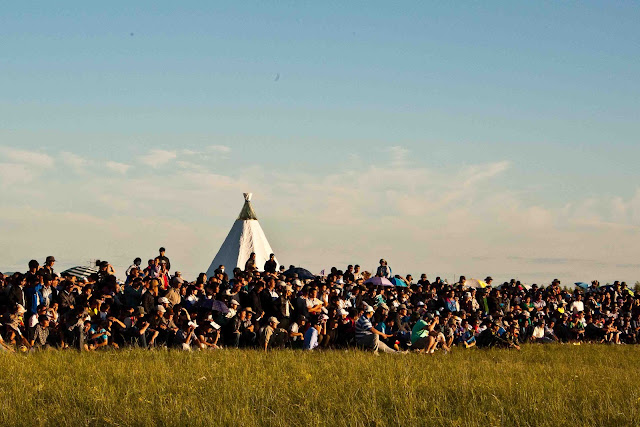 We stood politely behind, craning our necks, seeing nothing. Shouts erupted from the crowd and the excitement ramped up a notch, but we still couldn't see a thing and fidgeted and hopped from foot to foot and craned our necks more, until my youngest daughter was hoisted onto my husband's shoulders to act as sentinel and report back.

"It's the wrestling!" she yelled down to me. 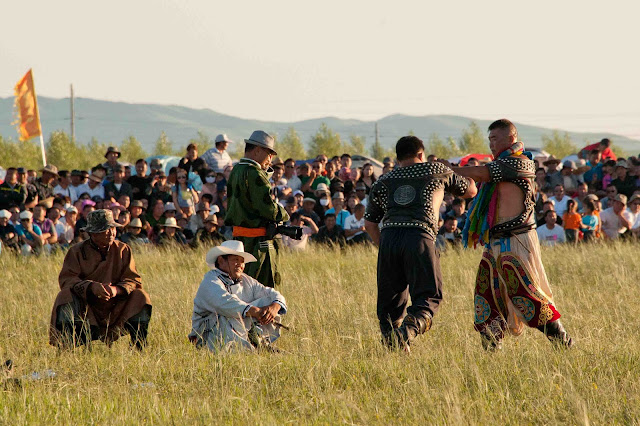 I'd read all about Mongolian wrestling by now, the bizarre costumes, the lengthy bouts, the force and determination required to win. I was desperate to see some action so I grabbed my camera and squeezed between the legs of half a dozen surprised onlookers until I was three men back from the front. Using the zoom lens I could just make out the two-man battle taking place - the wrestlers wore embroidered pantaloons and studded leather vests that covered their backs but left the chest bare. Three judges watched closely on as the wrestlers, locked in a hold, tried desperately to topple their opponents to the ground, forcing a win.

Then the arena erupted with shouts and yells and applause and before I knew it everyone around me was running into the centre. I had no idea what had just happened. The man beside me, seeing my confusion, said "That's it! it's all over!"

"The wrestling?" I asked

"The Naadam! This was the final wrestling bout, and when it's over, the Naadam ends."

All around me people now streamed back in the opposite direction, away from the field, the arena, and the victor. Naadam was over. 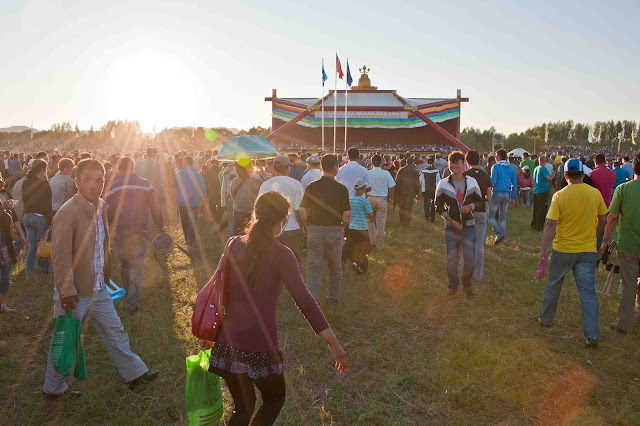 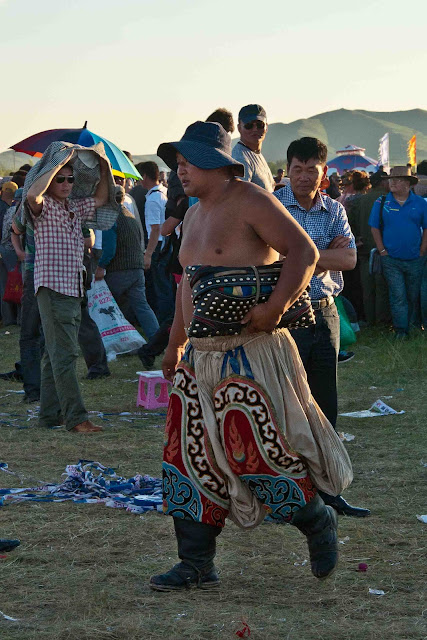 I watched the loser leave the arena, his studded leather vest folded neatly under his arm. I knew how he felt, to come so close and still lose out. To strive for something, catch it by the tail until you are certain of it, then feel it slip from your grasp.

A little part of me had a quiet cry, because I had become convinced that this was as close to a Naadam as we would ever get, probably in our whole lives. There would probably never be another chance to come so far, and the detour to Xanadu and now to the tail end of a Naadam had probably cost us our best chance of making it to Gegentala in time. Naadam was over. 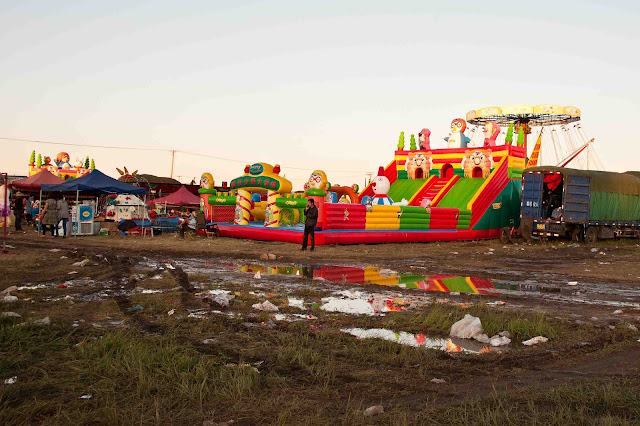