See How Easily You Can Camp in China! 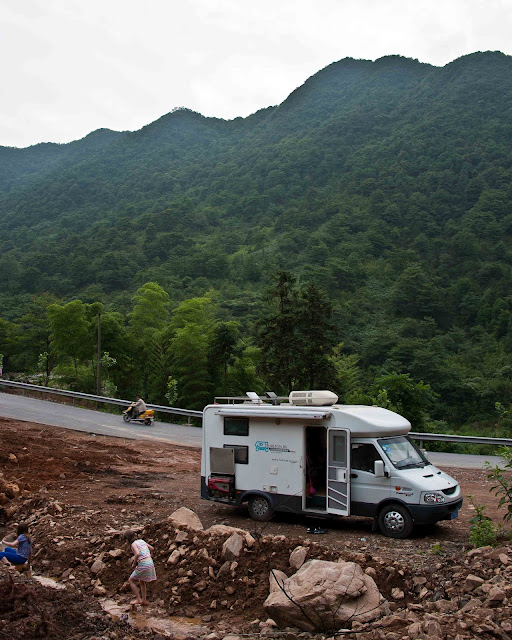 So I thought camping in China was supposed to be difficult, right? Isn't that what I've been telling you?

We spent last weekend taking our recently hired Great Chinese Campervan for a test drive and I can tell you that after two days, ten hours of driving, four hundred renminbi in tolls, a sleepless night on a bed the width of a plank, and one minor accident (no casualties), I honestly don't know what I was worried about.

Forget the doomsayers. Road camping in China is a piece of cake.

Here's how it's done:

Shanghai has no camping grounds, not a single one, so I knew we'd have to accomplish our test drive weekend further afield. Actually, there are only thirty functional camping grounds in all of China. Thirty. That's one for every....let me see.....43 million people. Not likely to be crowded then.

The closest camping ground to Shanghai is in Suzhou, only a couple of hours away, and it certainly has a beguiling website full of soft, clean city types promising all kinds of comfortable camping options. The campground - less of a nature reserve, and more like an adult playground - lists attractions such as:

Now I don't know about you, but I find the sound of intermittent gunfire quite soothing when I'm trying to get to sleep. But I absolutely draw the line at open air karaoke.

So we needed to find somewhere else, somewhere quiet, somewhere off the beaten track (because there are so very few campsites, those who do camp tend to find a clear spot of ground and set up there, and it's still uncommon enough to be quite acceptable).

Mr Chen, who owns the Great Chinese Campervan, suggested we hang out in the carpark of his RV rental business for the weekend, turning all the campervan gadgets on and off to see how they worked. It was a tempting offer, but I suspect he was just worried about letting us out onto the open road. After all, he knows we've only had our Chinese Driving Licence for six weeks. But I wanted to get out into the countryside and hear birds. Not in cages. And no traffic.

So we picked a spot randomly on one of our maps, based on the fact that the villages in that spot seemed further apart so there was a slim chance there might be a length of road with no people at all. An extraordinary concept for this part of China.

Shanghai is a mind-bogglingly large city. Huge. And we live right in the very, very heart of that tangled congested metropolis, a place with a population density similar to Sao Paulo or Mumbai. Just getting to the outskirts of Shanghai can take two hours on a good day, through the kind of spaghetti junction interchanges and confusing ring roads that would send any normal person insane.

Getting to a quiet little spot in the countryside means driving for several hours through this choked traffic via any one of fifty different routes offered up by Google maps. All of them unattractive. And don't even think about using a paper map, because as soon as they're printed they're already out of date, such is the relentless pace of development and new roads.

Personally, I find Chinese maps like the one above waaay too easy to read, so as Chief Navigator I like to increase the degree of route planning difficulty by suggesting a few wrong turns that require reversing down one-way streets the wrong way or off bridge on-ramps. Drivers like a challenge. 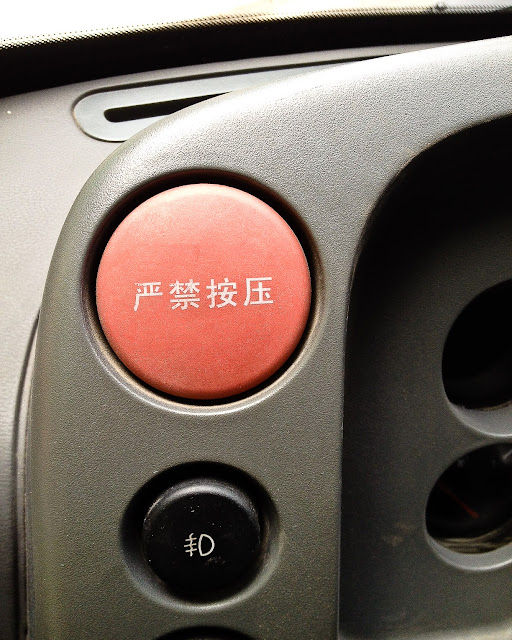 This, theoretically, should be the simplest of all these steps. Mr Chen had clearly said:

Put the key in the ignition.
Press the black button to activate the power.
Turn the key to start.

But when we sat in the driver's cab of our campervan the dashboard was lined with rows of black buttons, some of which had once been labelled with Chinese characters but were all now invisibly rubbed away by many fingers over many years. And when we tried the above sequence with all of the different black buttons, none of them worked. The engine, as they say, was kaput.

God knows what it did. Emptied the fuel tank. Short-circuited the electrics. Ejected the driver through the roof. Who knows.

But after only four minutes of not being able to start the engine, guess what my husband did. Yes.

And then we had one of those predictable domestics no one ever wins.

'Did you just push that red button?'

'How will we know what it does if we don't push it?'

'WHAAAT? You couldn't hold back? What if the engine blew up??'

'Ridiculous? Now the engine's broken, and you pushed the red button that broke it.'

'THAT is ridiculous. It was already broken when I pushed the red button. The red button doesn't mean anything.'

'Oh yeah. That's why Mr Chen, who neither speaks nor writes English, went to all the trouble of placing a sticky note over the top with a MESSAGE FOR YOU in ENGLISH. What did it say?'

Here's what it said: 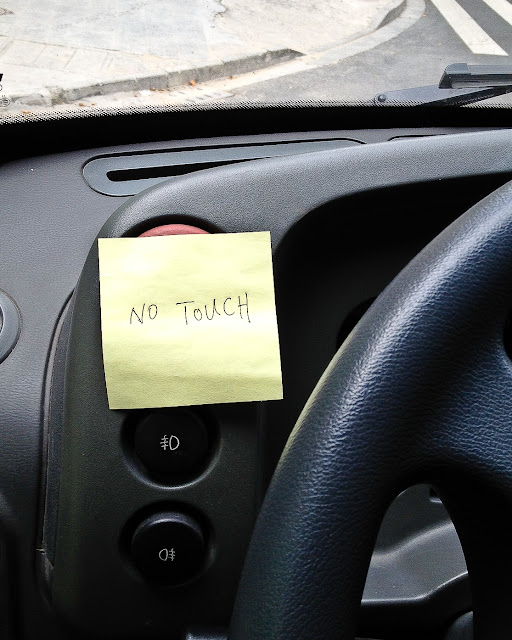 4. Get driving. Try not to get killed.

So, two hours later we were still sitting parked outside our house in Shanghai while various men stopped and helped, the local noodle guys took interior tours of the campervan, and bought our kids icecream. Still the damn thing wouldn't start. Dozens of phone calls were made, lots of futile attempts were made to follow the engine-starting instructions, tempers were frayed, blame was apportioned, and then suddenly -  it just started. Just. Like. That.

It was pretty exciting to finally be on our way, but now the real difficulties began. I think you may already suspect the major challenges of driving on Chinese roads - but there are two important things to know.

1. Imagine drawing an invisible horizontal line across your headlights and continuing it to the left and right. You are responsible for everything in front of that line, no matter how many rules it breaks or how stupid it is.

The drivers behind you are responsible for everything in front of their line, including you. So if you suddenly brake, change lanes without indicating, or reverse on the highway, it is up to the guys behind you to swerve, brake or get out of the way. And if they don't - their fault, not yours.

And when that wedding entourage of six red Audis in front of you suddenly careens across your lane with the passengers hanging out of the window filming the whole mess, then it's your responsibility to brake and swerve like a demon.

2. Everybody breaks the rules, but they do so in an entirely predictable way. For example, everyone continues to go through a red light for three seconds after it has turned red. If you stop on amber it will create mayhem. May-hem. 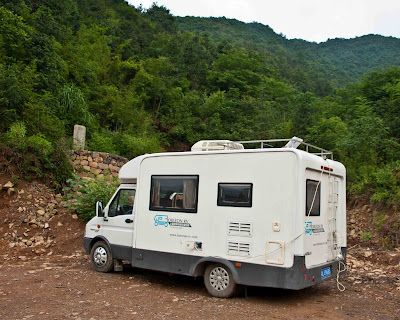 Amazingly, once we moved from big highway to smaller and smaller roads and headed into the hills south of the pretty town of Shaoxing, this little culvert in the midst of a lush green bamboo forest  presented itself. Across the road was a small tree-fringed reservoir with water of the most intense (and admittedly slightly unnatural) jade green. It was perfect.

The culvert was shielded from the road on the downhill side, and farmers coming up the hill in their lawnmower tuk-tuks were unable to stop on the slope, so no-one bothered us.

Or perhaps no one bothered us because we were camping directly beside a grave.

Either way, for ten long quiet hours we listened to nothing but the music of nature - frogs and crickets, and the rustling of wild bamboo in a breeze. 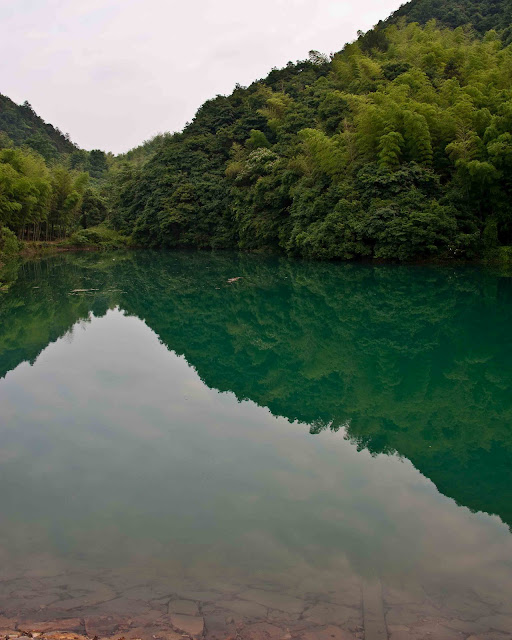 It was beautiful. We tested out our generator, and all the lights, and everything that opened and closed. We played scrabble until we ran out of battery power and went happily to bed.


6. Get home safely without breaking the campervan: 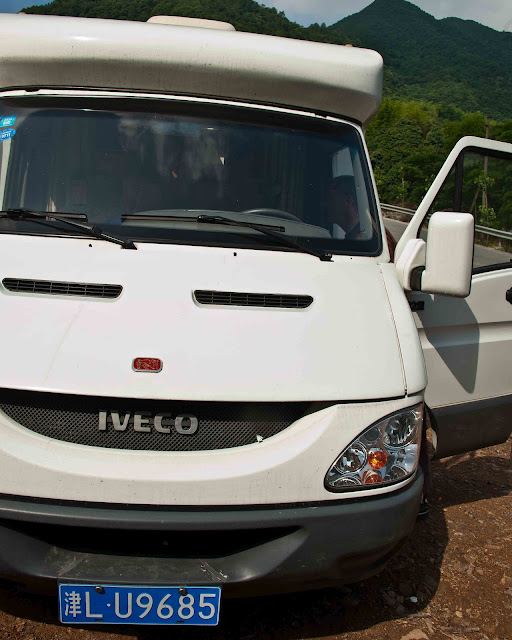 The next morning, buoyed by our overnight success at failing to attract any attention from the local Public Security Bureau, we set off back to Shanghai.

But as any seasoned Everest adventurer will tell you, it's the climb down the mountain that's the most dangerous.

Driving into the pretty town of Tingyuan, sun shining, we noticed a square entry arch across the roadway,  decoratively  trimmed in black and yellow diagonal stripes. There was an outdoor market up ahead which diverted our attention when suddenly an almighty BOOOMM!! ricocheted through the vehicle.

My husband slammed on the brakes and I swore like a navvy under my breath. We both thought we'd hit something, like a motorbike, and felt sick to the stomach.

We got out of the car and looked around. No motorbike. No bicycle. No wheelbarrow we'd run over. No one lying injured on the road.

Then we both looked behind us at the decorative entry arch, which now clearly presented itself as the 2.5 metre height-limited warning barrier it so obviously was. There was a scraped-off area on the underside of the cross bar where we had hit it at full speed.

We looked up at the front of our 2.8 metre high campervan where the airconditioning unit now stood on a very strange, loose angle. And a look passed between us that said 'I won't tell Mr Chen if you don't.'

In fact, despite swiping an archway and getting lost several times and nearly being killed by the crazy wedding entourage in red Audis, I consider our test drive an unqualified success, don't you? Bring on the real fun. Twenty-five days to go!