Failure is Not an Option.....Getting a Chinese Driving Licence 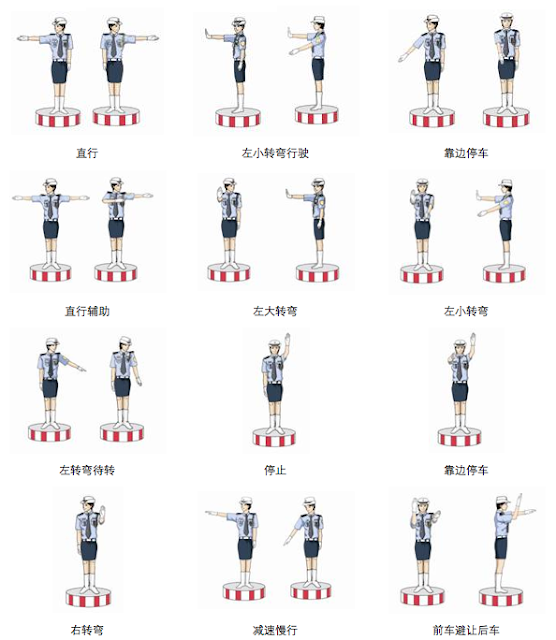 'How hard can it be to get a Chinese driving licence?' I thought to myself three years ago, fresh off the boat from Australia. I've been driving a car for twenty four years. Surely, like every other country in the world I can just hand them my overseas licence, get a Chinese one five minutes later, and hop in a car five minutes after that.

So now I can tell you. Getting a Chinese driving licence is not just hard, it's practically impossible. Which might explain why, in all this time, I've met exactly one foreigner who has one. One. And she only ever drives between her house in the 'burbs and her local shops.

I'm never one to step away from a challenge, but something about actually driving on China's roads held me back. Well, several things really.

For starters, the behaviour of my fellow drivers, who seem to think reversing the wrong way down an expressway on-ramp, or doing a U-turn on a crowded pedestrian crossing, or overtaking a bicycle which is overtaking a cart around a blind corner, uphill while talking on a mobile phone, is totally normal driving behaviour. At least in China it is.

Then there was the gradual dawning that most Chinese drivers in their forties have been driving for well under five years, thanks to the difficulty and cost of buying a car and purchasing a licence plate, meaning the roads are populated by a lethal band of middle-aged teenagers. 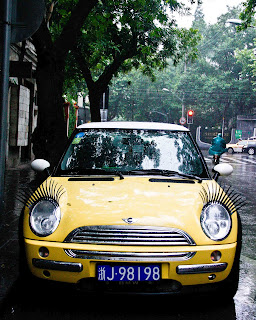 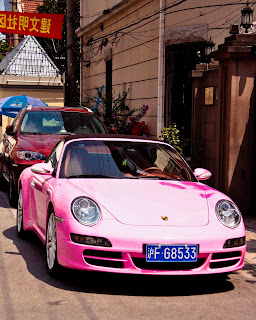 The kind of vehicles favoured by middle-aged teens - Mini Coopers with eyelashes, or baby pink Porsches. Please note, both of these vehicles were driven by Chinese men in their late forties.


But lastly, there was the realisation that to get a driving licence I would have to sit an actual 100-question theory test on Chinese road rules, and get ninety of them correct. Because for anyone who's ever visited China, you will know that Chinese road rules come from a different planet altogether, somewhere between Planet Kaos and Planet Every-Man-For-Himself.

So I put off getting my licence, until it became clear to me that driving around China in a campervan was going to be pretty tricky, if not impossible, if I couldn't legally drive. Especially after I discovered that the penalty for unlicenced driving is 15 days in the lock-up. The dream was destined to be no more than that if I didn't get my act together.

So I registered for the test (a two hour process involving four different buildings, twenty-eight different rooms, certified copies of everything I own, a bizarre medical examination and a set of photos) and settled down to study with a printed copy of the 1500 questions I would be required to know to pass the exam.

And again I thought (fool that I am) 'How hard can it be? I've been driving for twenty-four years. I've been riding a bicycle in Shanghai for three years. I've been a passenger over thousands of kilometres of observation in China. And I've been to Med School and passed hundreds of exams. It can't be that difficult'

After the first four pages of questions I broke out in a cold sweat and realised that I had met my match in the Traffic Control Bureau of the Ministry of Public Security. Let me give you a few sample questions.


When evading an emergency, the driver should be calm and stick to the principle of


When using splints, sticks, or tree branches to keep the unexposed bones in position, it is necesary that these things should

(Actually, I got all of the twenty first aid questions wrong, being a doctor and all, because they involved questions about the exact placement of tourniquets along the length of limbs and when to take a poisoned person to get fresh air. I couldn't make sense of a single one.)


When running on a road and encountering pedestrians crossing the road, the motorized vehicle should

A. Honk to urge the pedestrians to go faster
B. Speed up and pass
C. Reduce speed or stop and yield
D. Bypass


The main feature of pedestrians participating on road traffic is

A. They move slowly
B. They like to get together and look on
C. They are not stable
D. They walk around at will and can easily change directions

(Because when I'm faced with an imminent head-on collision, I always have time to let go of the steering wheel, undo my seatbelt, and move across to the passenger seat so that the steering wheel doesn't trap me. On the other hand, sometimes I just stay put and let the airbag do its work......)

After a vehice falls into water, the wrong method for the driver to rescue himself is to

A. Close the window to prevent water flowing into the vehicle
B. Immediately use hand to open the door
C. Let the water fill up the driver's cab so that the pressure inside and outside is equal
D. Use a large plastic bag to cover the head and tight the neck closely

Answer A (What the? It's CORRECT to suffocate yourself with a plastic bag over your head??)


When motorized vehicles cross each other on a narrow slope, the correct method is to allow___to go first

By now I'd become confused from all the complicated questions, and suspicious of questions that seemed too overtly simple, so in my state of paranoia and second guessing I got even the most basic questions wrong.

The main role of the engine lubrication system is

I answered A, because by now I knew their dirty double-crossing sneaky tricks. Surprisingly, to me at least, the answer was D.

My favourites were the true/false questions, which read just like the Chinese Driving Manual. Certainly, they reflected my experience of being on Shanghai's roads.

A person who drinks alcohol but is not drunk may drive a motorized vehicle.

When driving in windy, rainy, snowy, foggy and other complex weather conditions, the driver should turn on the head light, honk continuously and overtake rapidly if the vehicle in front goes slowly.

When following a vehicle, the following vehicle may use the high beam light.

When driving, the driver may spit to the road or street out of the window.

The driver of a motorized vehicle may drive a police car, a fire engine, a wrecker or an ambulance during the period of probation.

A motorized vehicle may make a U turn on an uphill road.

A motorized vehicle may make a U turn on the ramp of an expressway.

A motorized vehicle may reverse at an intersection.

A motorized vehicle may reverse on a one-way road.

If a motorized vehicle hits a building, a public facility or other facility, the driver may leave the scene right away.

When encountering slow-moving old people crossing the road, the driver may continuously honk to urge them.

A siren may be installed on a motor vehicle according to personal need.

(all false, not that you'd know it. But gee, I've always wanted my own siren)


For a whole week I did nothing but study those 1500 questions. I didn't go out. I didn't see friends. I barely saw my children. My husband I did see, because he was studying for the test too. We drank coffee, gallons of it, and hardly slept.

So it was in a pretty major state of anxiety that I submitted myself to the Traffic Control Bureau of the Ministry of Public Security, Shanghai Divison, for my test this week. After five hours' sleep and four cups of coffee between 5am and 9.15am, I sat down at the computer terminal shaking like a jackhammer, convinced of my imminent failure. It didn't help that we ran into a European guy leaving as we arrived, shaking his head and saying 'Tough test. Just failed.' Bugger.

But I took the advice of the experts. I didn't draw on my past experience. I didn't use any common sense. I just parroted the answers I had learned, by rote, over the previous week. Ten questions, fifty, one hundred. Sixty multichoice, forty true/false questions.

With heightened anxiety, I hit the 'Submit' button. Immediately, the invigilator walked over and pressed a button on my keyboard. The screen flashed red, never a good sign, and under the Chinese instructions on screen I read 'Review the Incorrect Answers'. I sighed. This didn't look good.

Then the fourth. The colour started to drain from my face. This was excruciating. Please, please, please.....

He hit another button.

I really, really passed! We both passed!! 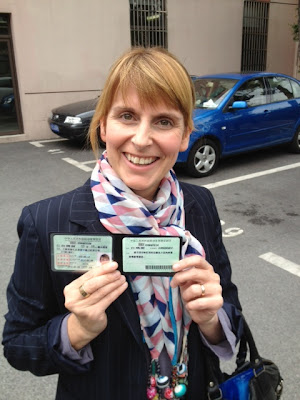 And just after this photo was taken it suddenly hit me like a tonne of bricks.
Now I have to drive on actual Chinese roads. With all those middle-aged teenagers. Hol-y hell. And I thought the test was frightening.

Next post: In which we finally find a campervan