Fourteen Things I'll Miss About Shanghai, and Four I Won't

I can't believe I leave Shanghai in less than 24 hours for our long awaited China Road Trip - it's going to be massively exciting to be on that wide open road tomorrow!

The enormity of what we're doing has really hit me in the last two weeks as I run frantically from hardware store to camping goods store, trying to find tricky bits of equipment like head torches and solar-powered camping lamps, then run back home to preserve some lemons. Because everyone knows a camping trip isn't complete without two jars of preserved lemons.

There have been a few very dark moments too where we thought the whole great big thing was going to fall over in a heap. After spending months just finding a campervan we could rent, contract negotiations on the van rental were completed only five days ago, mostly because we couldn't find a van that had most things working in it for a price that Mr Chen, the campervan rental guy, found attractive.

In an added twist it turns out the campervan we took for our test-drive weekend was completely and utterly illegal for us to drive, but thank god Mr Chen failed to mention it until we got back. I didn't want to spend my first night in jail before I'd even started the adventure.

The proper, real, and apparently legal campervan arrived yesterday morning, and then we discovered the 'seatbelts' Mr Chen had installed were in fact not 'genuine seatbelts' - so back it went for some more basic safety features to be installed, and was returned to us fully seatbelted last night. We have a van! We have a plan (of sorts - I've only had time to plan our first stop, and after that it gets a bit vague...)! Whatever, we're going on the road!

I will miss my beloved Shanghai though, so I've made a list to remind myself of all the great things about the city that I won't be seeing in the rest of China.

From next week - depending on the reliability of our high-tech on-the-road portable wifi - I'll be posting on Mondays and Thursdays about our travels. 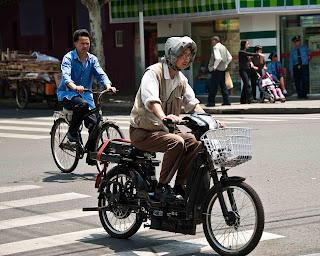 Nowhere else in China is eccentricity so openly embraced as in Shanghai.

Want to wear navy blue trouser socks with your flipflops, accesorized with nothing but a pair of underpants? Go right ahead. Wear pyjamas at all hours for strolling and doing a bit of shopping? Of course you can.
And should you want to wear a rolled up plastic bag on your head - for reasons known only to yourself - no one will even glance at you.

Lovable eccentrics, I will miss you. 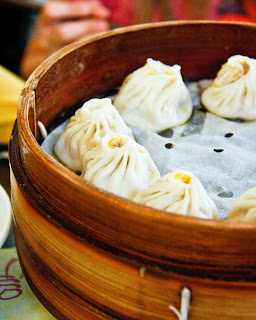 How will I go a whole six months without my weekly fix of Shanghai's world famous soup dumplings, xiaolongbao?

Sure, the other parts of China will have their own undeniably unique and delicious dumplings and I'll eat a bucketload of them on my travels, but I'll always hanker after a steamer full of these plump little xiaolongbao.


3. The Avocado Lady on Wulumuqi Lu 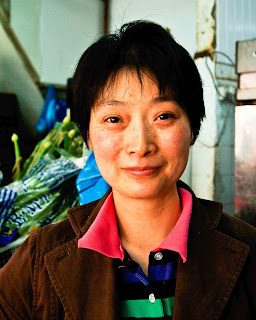 No, this isn't a fine food store but a completely chaotic Chinese vegetable shop run by a delightful woman we all call The Avocado Lady because avocados were the first 'foreign' food she ever sold. Now she sells everything I could possibly need to cook the foods I'm familiar with, at prices I can actually afford.

In the corner of the shop is a decrepit chest freezer filled with frozen duck carcasses and racks of lamb. The lady in front of me fished an entire side of smoked salmon from its depths. 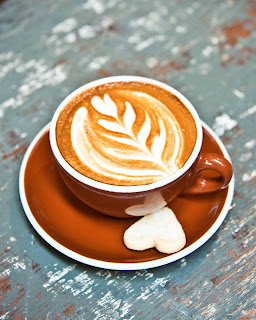 In a city so recently devoid of good coffee, Wagas sprung up like an oasis with its flat whites, long blacks and a great selection of cakes, pastas and salads.

Soon afterwards, they had a whole chain of coffee shops on their hands and the latest news is their long-awaited arrival on the Beijing coffee scene.

Wagas' own bakery finally went solo and Baker and Spice on Anfu Lu was born, my favourite coffee haunt in Shanghai - you can hang out at the long communal table, balance on those crazy three-legged stools, drink proper coffee, and eat a piece of great cake.


The plane trees on Nanchang Lu arch over the centre of the street and touch in the middle to form one long green tunnel of shade.

I stop at the intersection with Ruijin Lu where there's a really good dumpling shop, and wait for the red lights to count down from twenty to zero. Then I wait a bit more so I don't collide with all the guys whizzing through the red lights in the other direction.

I ride past my old house, and wave to the guy who runs the watch repair shop nearby. He stands outside the shop all day and smokes cigarettes, and never fails to give me a 'Heh-llllooo!' when I go past.

Wait a second....I won't have to miss these - I can still read them on the road thanks to the incredible 3G network coverage in just about every inch of China. But here they are anyway, my top three. 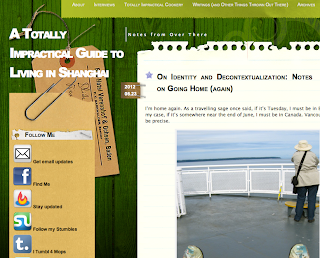 A Totally Impractical Guide to Living in Shanghai - written in MaryAnne's thoughtful and insightful style, she covers everything from her experiences as a language teacher, her travels, and the vagaries of living in this crazy city. 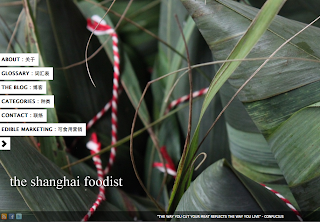 The Shanghai Foodist - all things food, all things Shanghai - Jake has been blogging about Shanghai's street foods, cafes and restaurants for years. I'll be hungry just looking at the pictures. 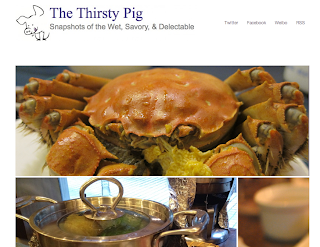 The Thirsty Pig - Jimmy eats out more than anyone I know and we all benefit from his fantastic restaurant reviews from wherever in Asia and the US he travels. Such a great resource! 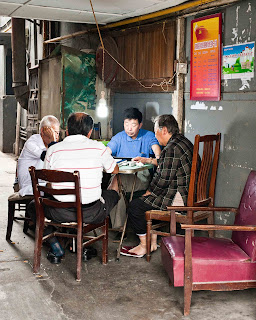 The private made public- that's how I see the street life of Shanghai, intimate daily moments lived out in the open - a woman washing her hair from a bowl of water, a child being scolded, an intense game of mahjong, the prize pool in stacks of notes on the corner of the table.

In every corner of every lane city, life stories are being lived on the street.

8. The Birds of Fuxing Park 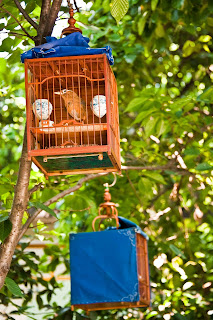 The old men bring their ornate birdcages by biccyle and on foot, covered with hand-embroidered blue drapes, and take them to the quiet corner of Fuxing Park behind the pond.

There the cages are hung side by side amongst the trees, and the birds sing their beautiful songs together while the old men gossip.

Part of me hates the sight of birds trapped in cages, but part of me loves the centuries-old tradition. 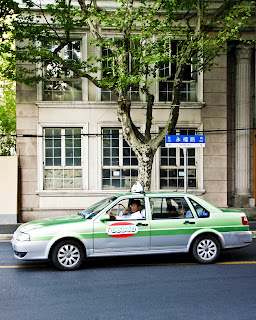 Last week a Shanghai taxi driver spent the thirty minute ride telling me how proud he was of his son, studying computer engineering at university. He hoped I might have a friend in Australia who would make a suitable match for him.

He and his wife work turn about at 24 hour shifts in their taxi, seeing each other at 6am each day for breakfast and handover. He told me taxi-driving licence was only previously possible if you were born in Shanghai, meaning all taxi drivers have an intimate knowledge of the city.

Now, a lack of drivers has meant there are some non-Shanghainese drivers on the roads, in his eyes a deplorable degradation of the profession. 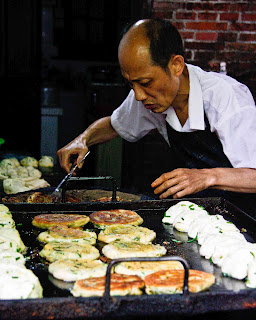 In a tiny little lane off Nanchang Lu just near Maoming Lu, is a tiny little kitchen annexe with a plastic roof and a barndoor-style door opening out on to the lane. The kitchen walls are black with years of accumulated grease and dust, just visible from the light of a single bare bulb, but from this unprepossessing room comes the best cong you bing in Shanghai, made by an old man who starts work at 2am every day to be ready to cook by dawn.

In the long queue I've met people from Hong Kong, people from other cities in China, and locals alike who've all heard about how good the salty, buttery scallion pancakes are, all waiting at least an hour to taste one, united in their foodie obsession.

11.  The View from my Kitchen Window 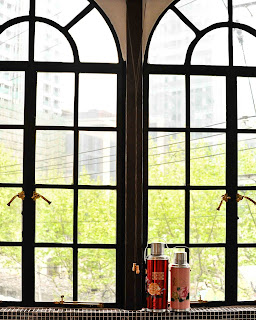 The thing I loved most about our new apartment on Nanchang Lu was the light-filled kitchen with arched windows looking down onto the street. It's the best kitchen I've had in Shanghai - spacious, with a big refrigerator and an oven that works - and I'm giving it all up for six months of cooking in a cupboard on wheels. Sigh. 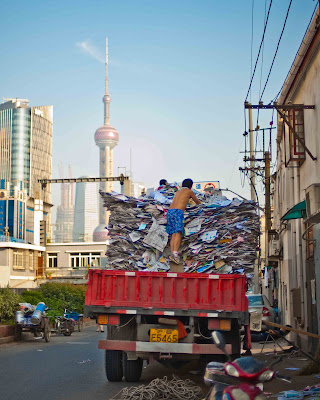 More rididulous and pink than any other building in the world, the Pearl Tower is the Barbie Sputnik of Shanghai. Yet I love catching sight of it in unexpected places like here in Hongkou, down a laneway full of paper recycling shops. 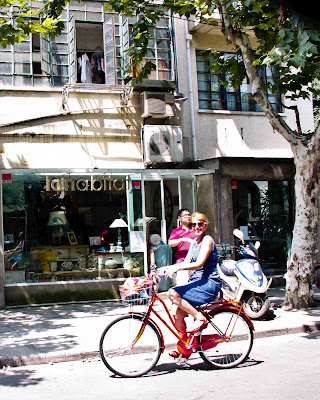 I am sure gonna miss this girl. No, not her, the bicycle. The campervan only has one place for bicycles - the roof - and Big Red weighs a tonne and is way too heavy to lift up and down every day. So as much as I love her, she's going to stay right here in Shanghai.
14. Bilingual Menu Support 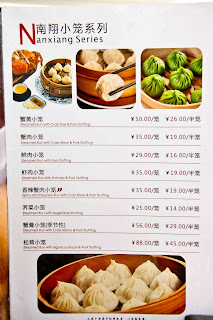 Oh boy, this one will be tough. Leaving Shanghai behind means the halcyon days of cheating on my Chinese and getting the bilingual/picture menu every time I eat out are pretty much over. It'll be back to the sad days of weird bits of offal or six almost identical tofu dishes when we eat out, at least until my menu Chinese catches up with my road sign Chinese.

1. Skies the colour of dirty dishwater 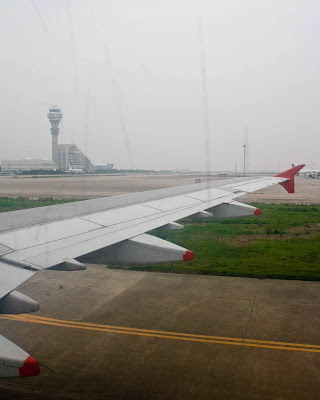 There's nothing more depressing than Shanghai's pollution, and descending from blue skies over the rest of China into the dense smog just makes you want to get on a plane straight out of there.

Shanghai, I'm sending you the bill for my future lung cancer treatment. 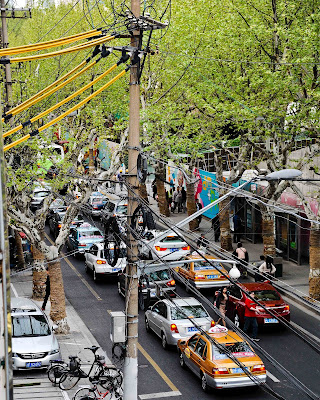 Shanghai specializes in heavy traffic, the way Beijing specializes in bureaucracy. And while the view from the Second Ring Road is undoubtedly lovely especially on a heavy smog day like the one above, I can think of ten better things I'd rather do with the three hours I just spent laboriously translating all the ads on the back of the bus in front. 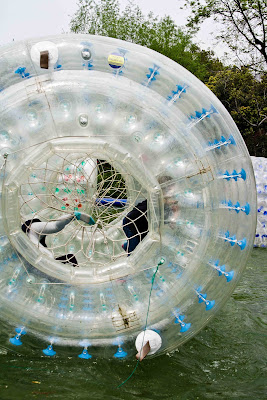 The first time your kids go on the floating hamster wheel in the pond at Fuxing Park, it's great fun watching them roll and tumble around like socks in the dryer. But the fifth, eighth, fourteenth and twenty-sixth times you stand there on the frozen concrete, jumping up and down to keep your circulation from seizing up it gets a little repetitive. 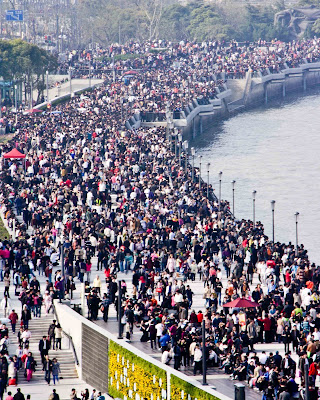 A quiet morning on The Bund. That's a lot of people in one place, a lot of people walking, arguing, talking on their mobile phones, trying to sell me a new genuine iPhone, and elbowing me out of the way.
I feel I'm ready for a little breathing space.

What do you love most (and least) about this great city?