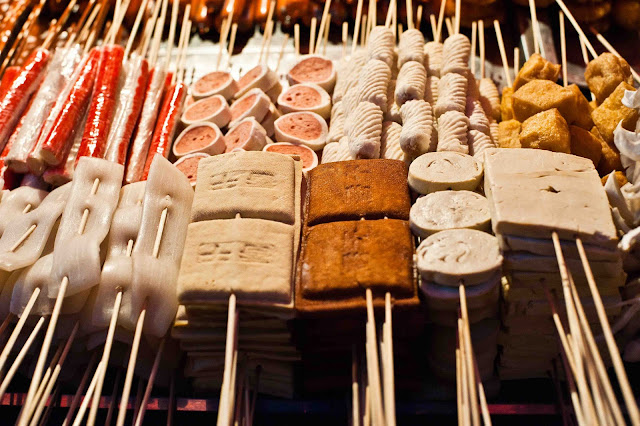 I watch with uneasiness as my friend, on his first visit to China, bites into a crunchy crisp-coated chicken drumstick bought on the street near my house in Shanghai.

"You might want to reconsider that chicken..." I'm about to say, when I think to myself that no-one likes a naysayer, or a know-it-all. So I don't say anything. He's enjoying himself, and his joy is infectious.

"I LOVE Shanghai!" he exclaims, licking his lips. "This is delicious!"

He spends the next two days no more than 3 steps from our bathroom, and never eats street food again.

Many people feel a very natural trepidation towards street food, some avoid it altogether, still others relish that tiny frisson of risk, the Russian roulette excitement that perhaps this will be the morsel that does you in, anxiously waiting for the sweats, the cramps, and the heaves to follow.

But the reality is that 2.5 billion people around the world eat street food every single day, many of them for everyday sustenance, and most of it is perfectly safe.

Most. But for those of us who have a choice about where we eat, and eat street food for the enjoyment and taste rather than for necessary nutrition, just how do you tell the difference between the safe and the harmful?

Well, read through this guide and you'll have a much better idea, and stick to the Five Street Food Rules at the bottom of the page.

The rules are not designed to be a 100% guarantee against what the Chinese delightfully call la duzi (拉肚子 a 'pulled stomach'), but can help you make sensible choices about what to eat and reduce your risk of becoming ill from eating street food.

Why trust me? I'm a doctor addicted to street food.  What people regard as my 'sixth sense' for street food is actually nothing more than years spent studying microbiology and pathology and treating thousands of cases of food poisoning over the years. When my patients tell me what they've eaten in the days before getting sick, I alway listen.

And now I'm passing the knowledge onto you - how food poisoning happens, what causes it, and how to avoid it.

How Do You Get Food Poisoning?

Foods can become contaminated by germs in water or soil, or from germs present in an animal's gut while it is still alive. Once slaughtered, the germs contaminate the animal's meat or eggs and once in food, these germs continue to multiply until you eat the food and get sick.

When a food-borne germ enters your system - usually through your mouth - you become potentially infectious to others. This can happen even before you become ill, as well as during the actual illness, and sometimes for weeks afterwards.

The most common way you can infect another person is by 'faecal-oral transmission'. In short, this means the germ is in your gut and your faeces, so when you go to the bathroom the bug can contaminate your hands. If you then prepare food the bug transfers from your hands to food or to objects like eating utensils and cups, which go into someone's mouth and then infect them.

The other factors peculiar to street food are a lack of sanitation, and a lack of refrigeration. Sanitation can be improved by handwashing with household soap and water, but many street food vendors lack a source of running water. Refrigeration kills some germs and slows other germs from multiplying, but in the absence of refrigeration in the outdoor environment where most street food is found, the rate at which food spoils and bacteria multiply will depend on the ambient temperature - warm days will cause food to spoil faster and germs to multiply faster.

The final factor increasing the risk of street food is you - you're travelling, you're in crowded places, you're touching railings, door knobs, and money that have all been handled by many, many other pairs of hands. The number of germs on your hands accumulates, and you then touch your mouth, or touch utensils you put in your mouth, and as my mum used to say "You might as well have licked the toilet door handle". Eww.

Most food poisoning is caused by just a handful of nasties, and it's worth knowing a little about their habits and what foods they like to hangout in so you can avoid them.

These eight organisms, one virus and seven bacteria, cause the vast majority of food-borne illness around the world. As you read through you'll begin to see some trends developing: undercooked chicken, minced meat, seafood, unpasteurised milk, uncooked vegetables. Take note.

1. Norovirus
Otherwise known as the 'cruise ship virus',  this highly contagious virus is the cause of more cases of foodborne illness than all other germs combined, accounting for more than 20 million illnesses and about 800 deaths annually in the USA.

Those 63 unlucky diners at Noma in Copenhagen? Norovirus. The food handler responsible showed no symptoms.

276 travellers on board the Ruby Princess? Norovirus.

Part of the problem is that you can become infectious several days before you get sick and up to 2 weeks after you're completely recovered. Norovirus can also survive relatively cold temperatures - down to zero degrees.

2. Campylobacter
The second most common cause of food borne illness, campylobacter infections are still outnumbered by norovirus infections twenty cases to one.

3. Salmonella
Most infections are caused by two strains, one of which is salmonella typhi, otherwise known as typhoid fever. It's a very common cause of traveller's diarrhoea.

The name has nothing to do with fish - the bacteria was named after scientist Daniel Elmer Salmon.

4. Clostridum
More accurately known as clostrdium perfringens, clostridium lives in the soil as well as the intestines of humans and animals. The bacteria produces a toxin that causes illness, and is most commonly found in foods that have been sitting at low temperatures after cooking, allowing the bacteria to multiply.

Anyone who has ever been pregnant will be very familiar with the sources of listeria infection - pregnant women are at particular risk.

6. E Coli
E coli is a bacteria found in every human being's intestines, and the intestines of many animals. Some varieties of E coli (O157:H7) produce a severe toxin that rarely can damage the kidneys and blood - a serious illness known as haemolytic-uraemic syndrome or HUS.

7. Vibrio
There are several types of vibrio: two species occur naturally in warm waters and cause illness in people consuming raw oysters. In Asia, Africa and parts of South America another type, vibrio cholerae, is instantly recognisable as the cause of cholera.

Sources: oysters, other shellfish, shrimp, faeces-contaminated water. WHO's motto is 'Boil it, Cook it, Peel it, or Leave it'.
Incubation period: from several hours to several days
Symptoms: severe watery diarrhoea, abdominal cramps, vomiting
Duration: 2-8 days
Vaccine: the cholera vaccine, an oral vaccine, currently offers only limited protection for a short period of time and is not recommended for travellers. It is not available in the USA.
Treatment: treatment of dehydration is extremely important. Antibiotics can help but are less important than rehydration.

8. Staph Aureus
That same old bug that causes skin infections and boils can also fester away in foods, causing a food poisoning of uncommon speed and severity. 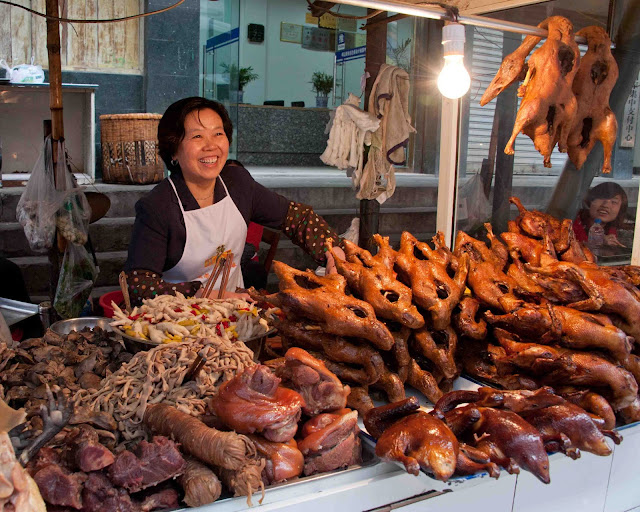 Questions to Ask Yourself Before Eating Street Food

Is this a high risk food?
You have a better idea now of the foods on this list: chicken, raw or undercooked eggs, minced meat, oysters, other shellfish, salads. I rarely eat any of these on the street, and always feel nervous if I do.

Is this a local food?
It's worth asking yourself whether the food on offer is local, and commonly eaten by locals. Long transport and storage times are all chances to allow bacteria to multiply, particularly in places where refrigeration is a rarity, so the further a food is from where it was grown or caught the more likely it is to be contaminated. For example, eating seafood far inland is high risk - you can't be confident it remained refrigerated as it moved from boat to processing factory to truck to train to truck to shop to vendor.

If the food is not commonly eaten by locals, the turnover of food may be slower, with a consequently higher chance of spoilage. For example, in China beef is less commonly eaten and more expensive than pork or chicken - so if a street food vendor has paid a higher price for a piece of beef he is less likely to discard it at the earliest sign of spoilage.

How was this cooked?
Cooking temperatures are crucial to the killing of bacteria and viruses. The temperature 'danger zone' for bacterial growth in food is 5-60C (40-140F). Most cooking methods have higher temperatures than this:

Larger cuts of meat and large whole fish are more risky because they need to reach a core temp of 74C (165F) for safety - the outside of the meat may be well cooked, but the inside may not. If meat is pink or raw looking, it's at risk. For this reason, smaller pieces of meat are less risky because they're more likely to be cooked all the way through.

How long has it been sitting here?
Food begins to spoil the moment it ceases being alive. Refrigeration will slow this process, but not prevent it.
Foods spoil in the following order (from shortest to longest spoilage times): shellfish, fish, chicken, turkey, duck, pork, beef/lamb.

In addition, once food is cooked it needs to be kept hot - well above 60C, or cooled down rapidly and refrigerated. Hence the risk associated with pre-cooked foods like stews, sauces and braises that are inadequately reheated.

Who is preparing my food?
Do they look healthy? Are their hands clean?

Is the food environment clean?
Because germs can live on other surfaces like tabletops, poorly washed eating utensils, and chairs, street food restaurants with filthy table tops and dirty dishes are best avoided. Look for a place that has some pride in its appearance. 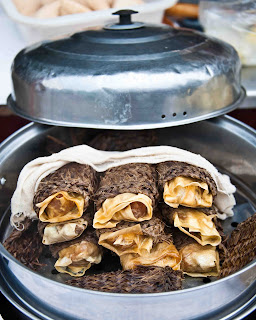 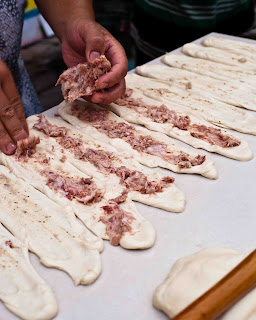 Problem: Beef mince wrapped in tofu skin. Steamer barely simmering, so low cooking heat. Beef was only partly cooked when I took a bite: I discarded the rest.

Problem: Handling of raw pork mince, no access to water or handwashing. However: long queue (popular with locals) and pork pancake was then cooked on a very hot griddle, and eaten straight away wrapped in paper to keep it clean from my dirty hands. I ate it - no problems. 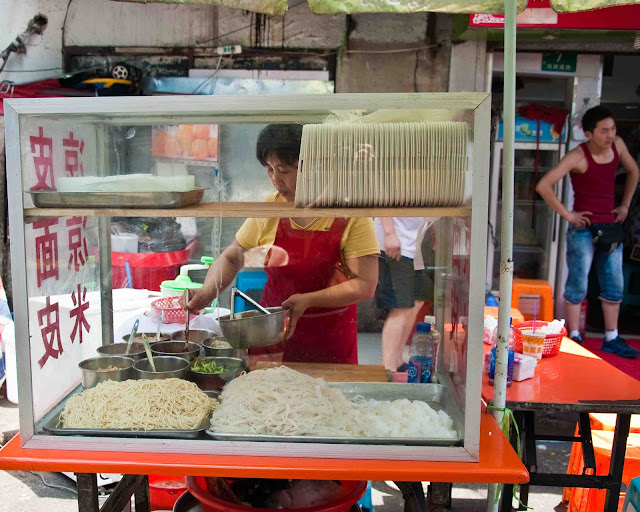 Problem: cold noodles (usually safe) mixed with raw vegetables (potentially unsafe). However: the vendor's set up is clean and tidy, her hands are clean and don't touch the food as she mixes it. I ate it - no problems. 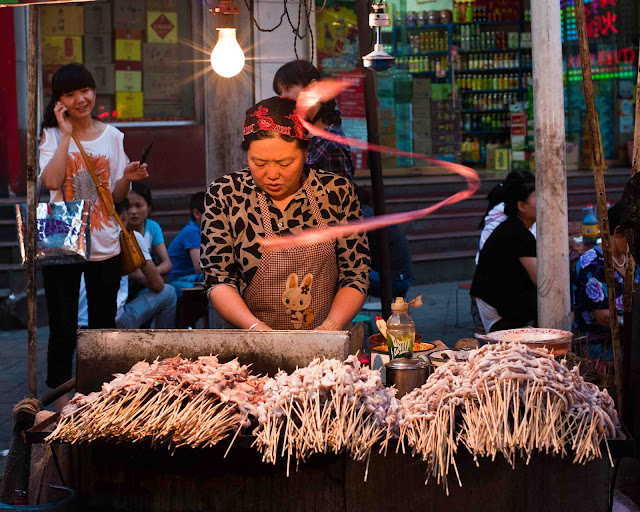 Problem: skewers of raw chicken, marinated chicken, and squid approx 2000km inland, waiting to be grilled. No refrigeration, and a very warm night after a hot day. I gave it a miss.

The Five Street Food Rules
Based on all of this information, here are five simple street food rules that will stand you in good stead anywhere in the world.

Please once again note: They apply to healthy adults, not high risk groups such as very young children, pregnant women, the elderly, and those with chronic illness.


1. Always wash your hands before eating. If you cannot, use chopsticks or a fork.

5. Eat with an adventurous spirit, but be prepared just in case. 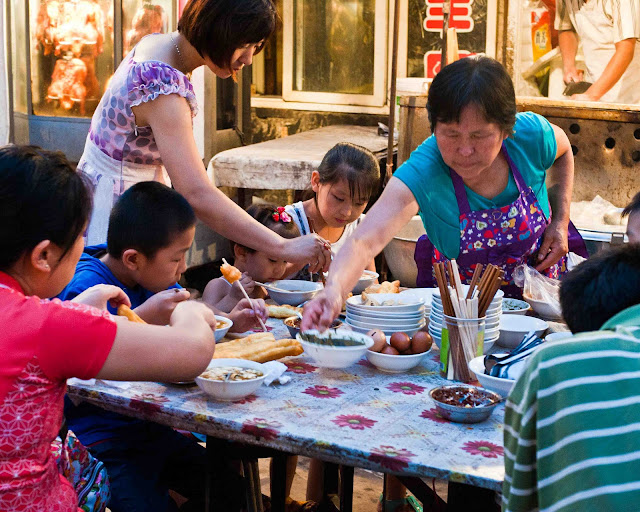