Can Someone Please Let Me Know When My Good Luck Is About To Run Out?

It's been quite the week.

Not one, but three extraordinary and amazing things have happened one after the other, bang, bang, bang, and I'm beginning to worry that my overflowing Good Luck will cause some Bad Luck to sit up and pay attention, hoping to get in on the act. I suspect, on reflection, that I've become quite Chinese in my thinking.

Firstly, I was asked to take part in the Shanghai International Literary Festival next month, a three week smorgasbord of writers, books and avid readers starting tomorrow, March 1, and running until March 17.
I'll be the session moderator for a literary lunch on Friday, March 15 at M on the Bund featuring author Audra Ang and her new book 'To The People, Food Is Heaven', describing Audra's years in China as an Associated Press journalist obsessed by food. During that time Audra covered some of the most remarkable and memorable stories in China's recent history, and her book is an incredible account of those times.
Later that same afternoon Audra and I will lead a Shanghai street food tour, introducing a lucky group of food-lovers to some of Sanghai's best and tastiest street food.

I can't think of anything better than to get together with food-loving book-lovers, so when I was approached to take part in the festival I said yes, right away! If you'd like to come along and enjoy a great meal and hear Audra speak I'd so love to see you there. Tickets are selling fast, so I've included details below on how you can attend. (Stop press: tickets to the food tour have SOLD OUT but lunch tickets are still available) 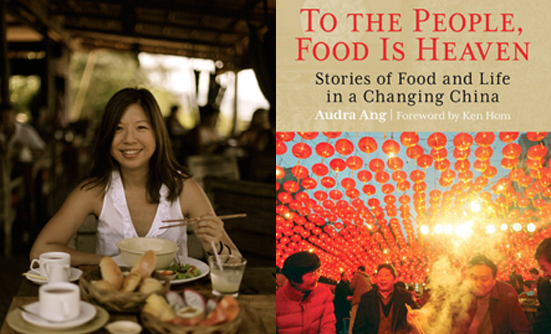 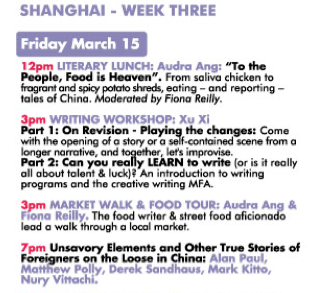 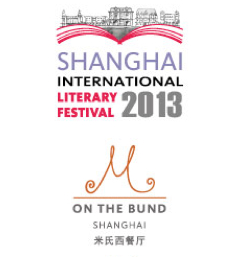 Then a few days later I discovered I had been named a finalist in this year's Pink Lady Food Photographer of the Year awards, the award ceremony I was lucky enough to attend last year in London. I was completely excited about making it to the finals with almost 8,000 entries this year from talented food photographers the world over, and judges of the likes of food writer Jay Rayner, celebrated chef Tom Aikens, and incredible food photographer David Loftus. Jumping up and down a bit? Perhaps I was...

(Much as I'd love to, I'm not permitted to reveal the photo that made the finals until the awards in London in April.) 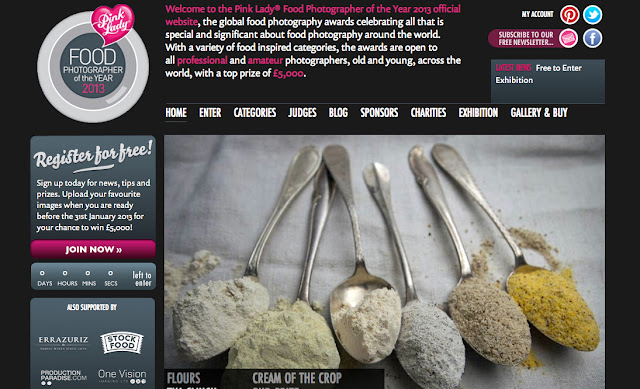 Finally, and as if the week wasn't already shaping up to a cracker, I discovered I was a finalist in the 2013 Bloggies (yes! the Oscars for the blogging world!), in the category of Best Asian Weblog.

Now I don't which of you wonderful people nominated me, but I thank you from the bottom of my heart - I feel extraordinarily humbled and grateful that you considered my blog as worthy of being amongst the best in that category. Wow.  WOW. 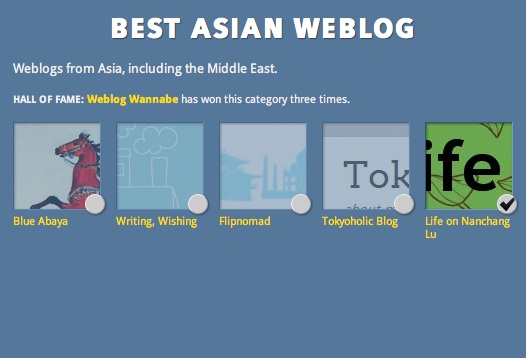 The other blogs in this category are all brilliant and if you have a chance check them out.

The winner is decided on the number of votes received, so if you have a minute please hop onto the 2013 Bloggies website to vote.

All you need do is tick the blogs you like (I have included a voting example above, in case you're confused ;-) and after writing the robot-proof words in the box at the bottom of the page with your email address, click to submit your nominations. Your email address is needed to prevent you voting 800 times from one email address. Which you can totally do if you want, but they won't count 799 of those votes. Damn.

Anyway, it's dead easy and I will love you forever and ever if you vote. I might even send you a dumpling or ten. Pork and chive? Shrimp and white cabbage?

With an abundance of good luck raining down on my head this week I began to wonder when it would all end. I'm not naturally a pessimist you know, but working in the Emergency Room of a great big hospital does tend to make you think that Good Luck can't last forever, and runs of Bad Luck happen all too often, even to very nice people. When my Bad Luck turns up, I'd like enough warning so I could get to a bunker somewhere quiet, in the hope of avoiding it for as long as possible.

According to Chinese thinking, when a run of good luck occurs, bad luck is likely to be just around the corner waiting for you to mess up. When things go up, the Chinese believe that the natural tendency of the universe is to turn in the opposite direction, and quite soon. It's their way of being prepared at all times for sudden changes in ones' fortune, good or bad.

Well, to hell with that. I think I just need to analyze it all less and enjoy it more. Stop thinking. Start opening champagne and preparing those dumplings for all of you!

But just in case, if you see my Bad Luck lurking around a corner somewhere, could you let me know?It'll give me time to get my bunker filled with snacks.

You can purchase tickets one of two ways:

Through mypiao  or at M on the Bund, in person only, Saturdays and Sundays 10am-5pm during the festival.