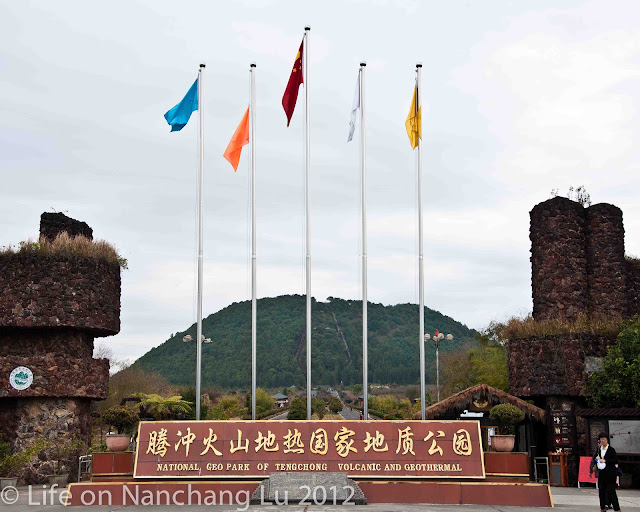 Ever since the Brady Bunch went to Hawaii and saw volcanoes I've wanted to see a real volcano too, glowing with lava and occasionally letting off spurts of sulphurous steam. Like Indianna Jones faced with the Temple of Doom, the thought of a sacrificial pit filled with bubbling lava was very thrilling to my fourteen year-old self, although I wasn't as keen on the human sacrifice component involved.

Suffice to say I have a highly romantic and somewhat idealised mental vision of volcanoes, dented somewhat when Mount St Helens erupted, completely lava free, killing fifty seven, and rekindled after recently re-reading Mark Twain's American travel odyssey Roughing It, with a description of a night-time walk across the three-mile wide crater of the Kilauea volcano in Hawaii:

"Under us, and stretching away before us, was a heaving sea of molten fire of seemingly limitless extent. The glare from it was so blinding that it was some time before we could bear to look upon it steadily.
It was like gazing at the sun at noon-day, except that the glare was not quite so white. At unequal distances all around the shores of the lake were nearly white-hot chimneys or hollow drums of lava, four or five feet high, and up through them were bursting gorgeous sprays of lava-gouts and gem spangles, some white, some red and some golden—a ceaseless bombardment, and one that fascinated the eye with its unapproachable splendor."


So after hearing that western Yunnan is home to China's own volcano cluster, we took an almighty detour towards the Myanmar border to the centre of the action at the Tengchong Volcano Park, or more properly and Chinglish-ly named the National Geo Park Of Tengchong Volcanic And Geothermal. I guess that covers everything.

My expectations of volcanic satisfaction were high, given that in China everything is big. This was going to be major, and we could also say it was educational and therefore justify the four days' round trip out of our way to see it.

The whole Tengchong region is a hotbed of seismic activity with volcanoes, hot springs, geysers and reasonably frequent earthquakes. We thought it might be an exciting place to take the kids to maybe see some science in action, but just in case we saw a bit too much science in action we made a family pact not to tell anyone back home until after we were safely somewhere else. Which we now are.

I'd built up quite an exciting level of risk in my mind, imagining walking Twain-style across a just-cooled crater of lava, but my first niggling doubts that the experience might be just slightly underwhelming came when we arrived at the Volcano Park and purchased tickets. 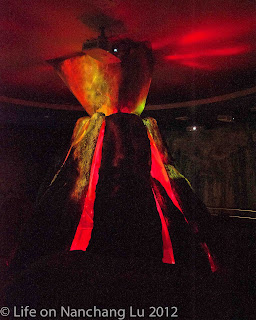 Empty? I thought. Empty? Surely not.

We opted for Big Empty Mountain, being the biggest, but first took a turn through the Volcano Museum where they displayed an out-of-work geiger counter and a battery-operated volcano replica at least as tall as a person, rivers of red cellophane lava flowing endlessly down its sides. This was going to be GOOD.


The climb up Big Empty Mountain's 648 stairs was just the thing for building anticipation of what a real volcano crater would look like. Never mind that the volcano itself was small. The crater would be black. Crusted with ancient lava. Perhaps occasional little puffs of high-pressure steam. Maybe.

Huffing and puffing, we arrived at the top to find this: 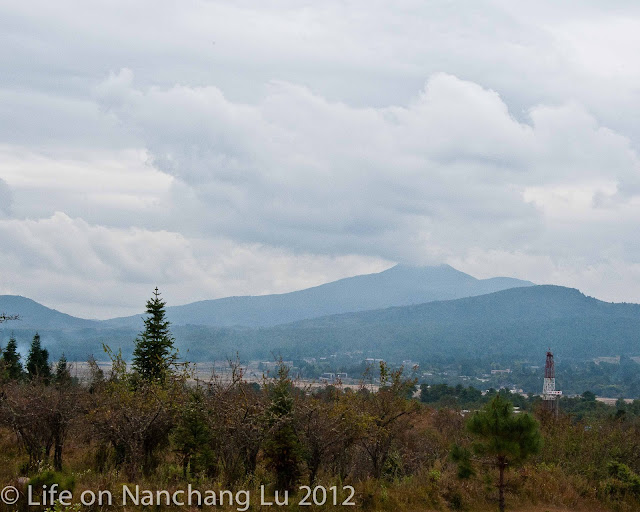 At least the view from the top was lovely, and for a very brief minute we were able to convince the kids that the far off hill was smoking, until the cloud moved and destroyed that illusion.

I asked the girls how they thought it might have been better.

The older one favoured a scorched earth approach to volcano improvement:

"They should have taken away all the trees and grass so it looked more like a real volcano" (volcanoes in her mind being blackened cones of rock glowing red from within).

The younger one felt some lava inside the crater would have been better than "a bunch of trees" or failing that "at least a lake you could swim in".

In summary, they named it a "spectacular disappointment" and didn't even stop to look at the lava souvenirs carved into fish shapes, something they may one day regret.


The Sea of Heat 热海
Which is how we ended up later that day at the fabled Tengchong Sea of Heat, acres of boiling waters, geysers, bubbling mud and noxious gases. At least, that's what we all thought it should have. We did know there was an outdoor swimming pool heated with therapeutic underground spring waters, and if there's one thing that makes up for pretty much any disappointment when you're a child, it's the thought of splashing around in a swimming pool for a few hours.

We spent an hour searching through the campervan's dozen or more cupboards for everyone's swimming costumes, unworn since the beach on Lian Island, packed them into a bag along with changes of clothes and hairbrushes, and fought our way to the ticket office through a hundred tour buses and a hundred ladies selling eggs wrapped in raffia in the carpark. Why eggs? We had no idea.

The smiling ladies behind the vast ticket counter asked whether we wanted to see everything in the Sea of Heat, or just a select few things like the Boiling Cauldron and the Sea of Pearls.

"We just want to go swimming actually" we said.

"OK, so altogether that's one thousand and seventy two yuan" she told me.

At this point, expensive disappointing volcano behind us and promise of swimming rapidly evaporating before us, I became one of those tourists. The one who can't believe how expensive everything is. The one who has to make her point known to the poor dummy manning the ticket desk, the same dummy with no say over the obscene prices charged by private enterprises who have bribed their way into running a business inside a national park.

"Can you sleep there overnight?"

"Do you get breakfast, lunch and dinner for free?"

"So HOW can you justify charging 268 yuan to go swimming??"

"It's very good. The waters are very steamy."

My husband gently pulled my elbow. "Let's just pay to see the hot springs, how about that?" 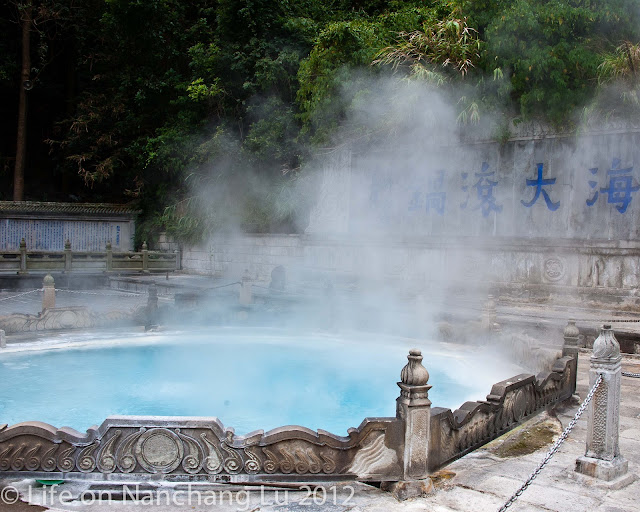 So we paid the relatively paltry sum of forty dollars to see the Boiling Cauldron, an impressively scalding pool of sulfur-bubbling water where suddenly eggs wrapped in raffia made perfect sense. Why just look at a pool of boiling volcanic water when you could cook stuff in it? Genius.
因此我们就付了相当于40美元的数额去看了沸腾的大锅，一个特别令人印象深刻的景象出现了，这是个滚烫的冒着硫磺泡的水池，突然有裹着拉菲草的鸡蛋出现，感觉真是好极了。当你能填满它来煮东西的时候，干嘛只是眼巴巴的看着它？简直是天才。 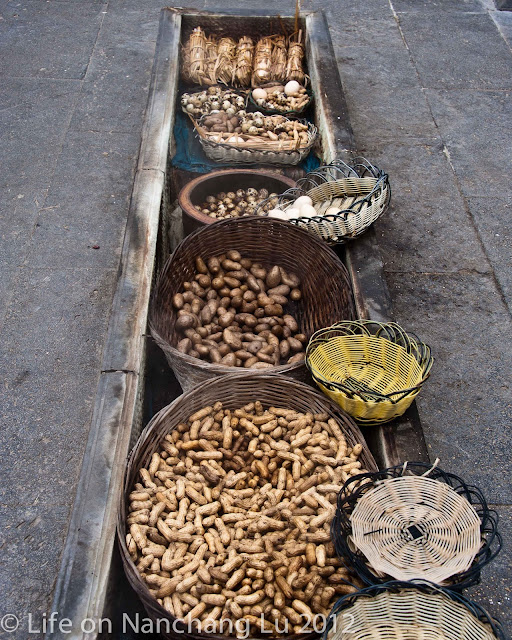 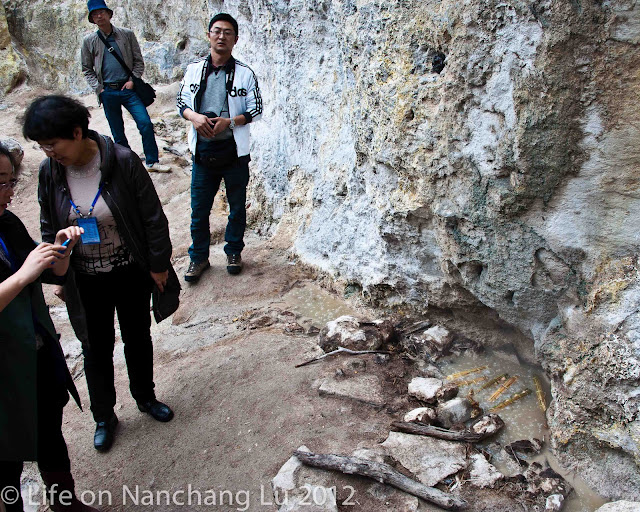 The cheapskates who had brought eggs in from the carpark were relegated to a simmering puddle in a far corner, away from those who could afford to pay the premium price charged by yet another private enterprise for the privilege of having their eggs (and peanuts and potatoes) cooked in the actual Boiling Cauldron.

At that point I could feel the familiar buzz of a bee in my bonnet but thankfully kept it to myself. We had all paid the same entry price, and yet we couldn't all cook our eggs in the Boiling Cauldron, and we couldn't all enjoy the view from the outdoor seats because those things were all extras run by private companies.

As we walked through the park VIP Beauty Spas and Very Expensive Tea Shops popped up at every turn. I don't mind paying an entry ticket to see an attraction, far from it, but when most of my path is roped off to permit access only to people who've paid VIP prices? It's just....just....JUST NOT VERY COMMUNIST now is it?? 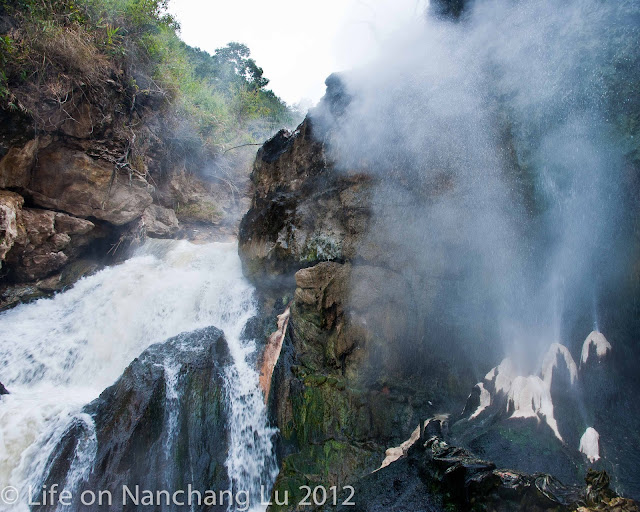 Unfortunately, the best view of this waterfall of boiling water and frog-mouthed geysers was roped off, obstructed by a large tent selling photos of tourists taken in a VIP position with the best view. 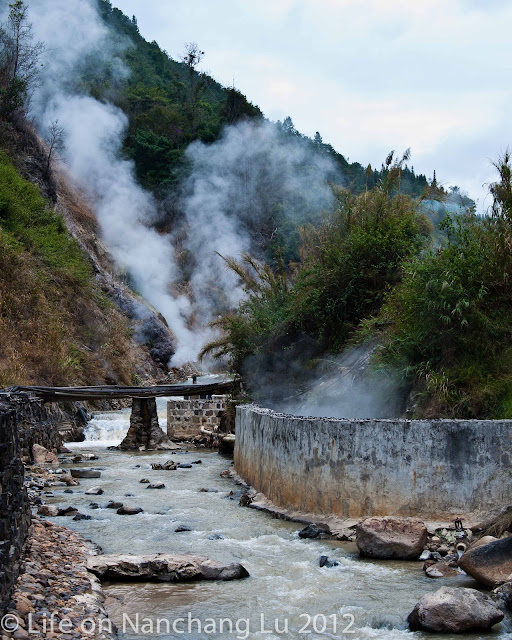 And the previously impressive boiling river had been diverted with a very attractive rock wall and pipe to feed the VIP Spa nearby.
之前印象深刻的沸腾河已经被改变了, 变成一个吸引众人的石墙和供养附近水疗的一个管道. 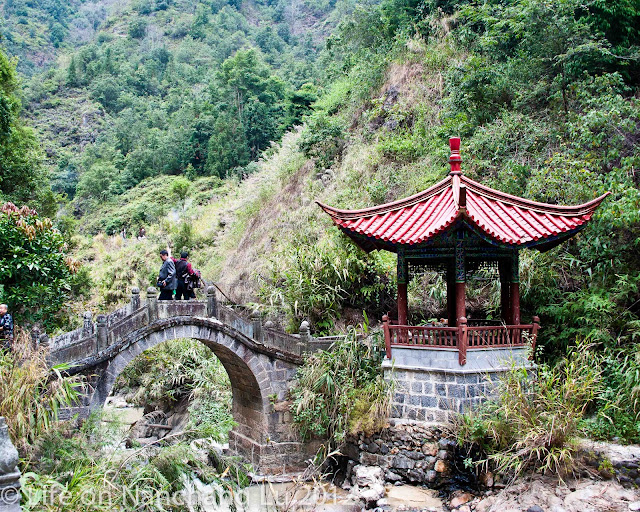 The pavilion and bridge were, unbelievably, Included in The Entry Price. I kept waiting for someone to spring out and charge me for walking on it.

We rounded a corner and there it was, the Unbelievably Expensive Swimming Pool in the midst of a Costly Private Resort, smack bang in the middle of a national park we had all paid to get into. The path through the valley was no longer passable because the resort had requisitioned all the land.

The girls made little conciliatory remarks to make us feel better, like "I bet they wouldn't even let you play Marco Polo in there" and "people probably spit in the water".

We stood on one side of the fence and watched the only two occupants of the pool, men with white towels wrapped around their waists, walk past smoking.

"You've been ripped off!" I wanted to yell at them, and at all the tourists around us. But they were too busy lining up to pay for a laminated copy of their geyser photos. Oh China. 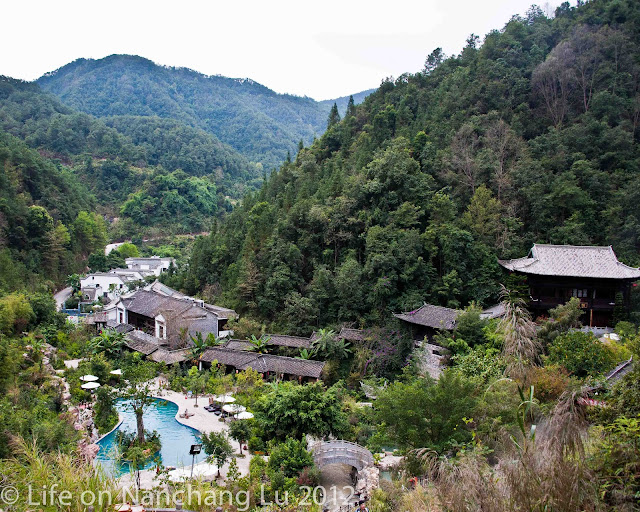