The Singing Sand Dunes and the Lost Library of Dunhuang, by Camel 在骆驼上穿越鸣沙山到达失落的敦煌宝库 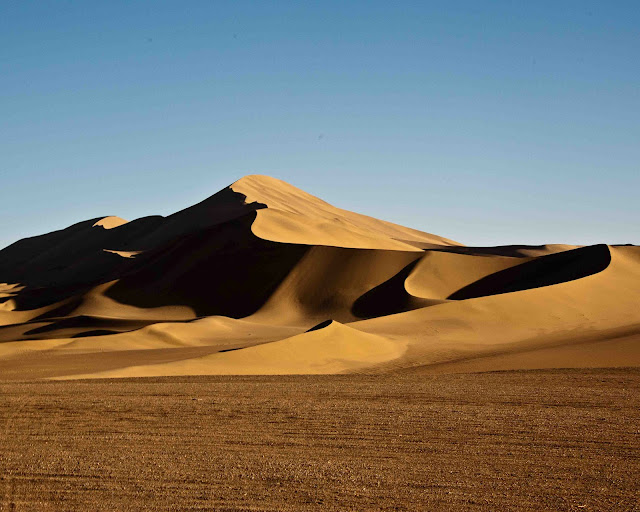 The first thing you notice is the silence, the soft footfall of camel steps on the dark gold sand, and then Master Li the camel-herder begins to sing: low, long, meandering lullabies to the camels. The cadence of the lullaby is familiar, repetitive, but the tune and the words are lost to me, foreign and exotic.

We are travelling by camel through the Singing Sand Dunes of far western Gansu, to the fabled Lost Library of Dunhuang and more than seven hundred caves filled with Buddhist art treasure at Mogao Ku.

I watch the head of my camel, looking for signs that the singing soothes him but rogue that he is, he continues to wrench his head from side to side looking for an opportunity to present itself - some grass, a thorny bush, a piece of rope to chew on. He's not the best behaved camel in our line, which is probably why he's been relegated to the rear of the line.

We're taking a meandering three-day trek on camel-back from the dunes just outside the ancient Silk Road trading oasis of Dunhuang, to the caves and back, camping amongst the sand dunes. This is the route wealthy merchants, traders and the locally devout would take to the Buddhist grottoes of Mogao, whose richly decorated caves date to the early 4th century, to pray and give offerings to the Buddhist monks.

We meet in the late afternoon outside Master Li's farmhouse, where he assigns each of us a camel. Camels are contrary creatures, slow, obstinate and smelly, yet I can't help but admire their stoicism, walking as they do for long dry days without food or drink carrying heavy loads, namely all of us.

Master Li gives the youngest camel, a white one, to my youngest daughter; the oldest and strongest camel - who will also lead the trek- to my husband; and the most handsome camel to my older daughter.

There is one camel left. I wish I could say he was handsome, but he's a bandy-legged, smelly-breathed rogue with bulging eyes that point in completely different directions and a terrifically lopsided nose, pulled as it is to one side by his wooden nose-ring, giving him an overall goofy and gormless appearance. At this point I feel sorry for him, and move forward to give him a welcoming pat on the head which he offsets by sneering at me with horrible yellowed teeth and then drooling grass-coloured spit until it is just about to hit the ground, then shaking his head violently, sending green spit flying all over me.

So, that would be my camel then. 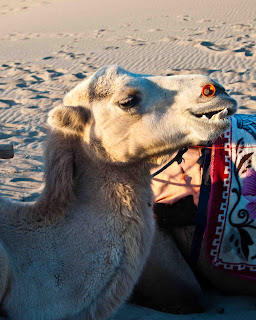 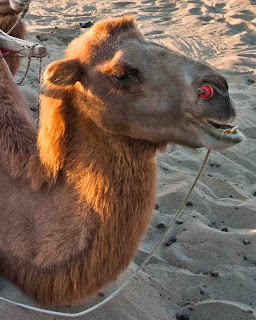 The white camel, young and pretty. The old camel, strong and wise. 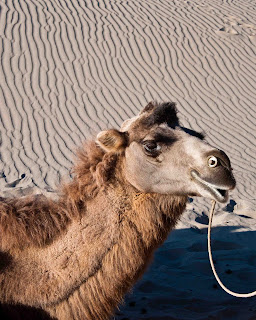 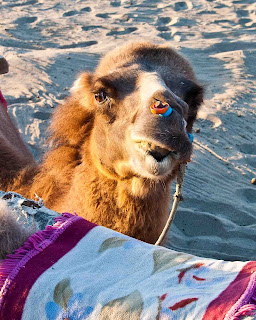 The handsome camel, with a velvet nose. And my camel. Enough said.

Our relationship is further cemented when  I have only half mounted the saddle before he decides to stand up.

Having a camel move from sitting to standing while you are on its back (let alone half on its back) is very disconcerting as you unexpectedly pitch violently forwards, then backwards and upwards at the same time. Once properly upright you can regain some sense of dignity until the camels start moving, a rolling, yawing, pitching sort of lumber.

We amble slowly from Master Li's apple and jujube farm, four of us in a row, Master Li at the front and the Rogue and I at the rear, and head slowly westwards towards the dunes through a Muslim graveyard filled with conical tombs. 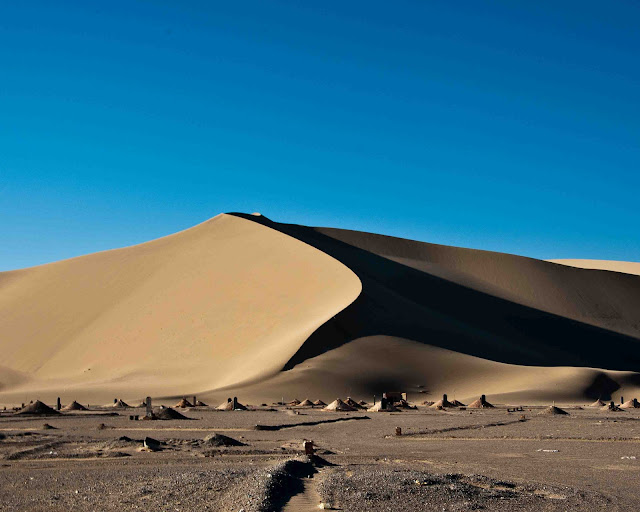 The sand dunes are unbelievably magnificent in the light of the setting sun, a deep gold, their shadows dark and crisp-edged. Every few minutes the view and colours of the dunes change, ever-shifting. There is not a sound to be heard but the swish of the sand under soft camel feet and the singing of Master Li.

Moon Rising 月升
Two hours later and we have reached our camp in a hollow nestled between two steep dunes, protecting it from desert winds that blow stinging sand and grit.

The camels rest while Master Li, barefoot now, makes camp. He won't take any help from us to erect the tent and lay out the sleeping bags, and start a small fire, having his own method and order.

From his box of provisions comes a simple dinner of noodles, boiled eggs and bread, with apples and jujubes from his farm. Never has food tasted so good as it does here in the desert! 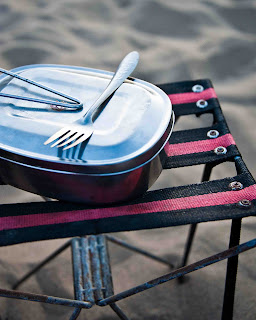 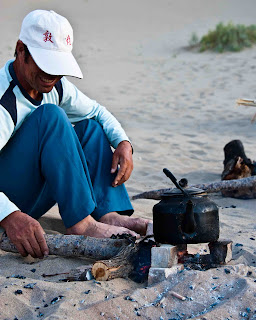 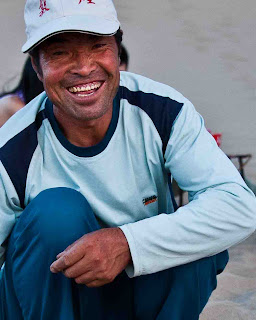 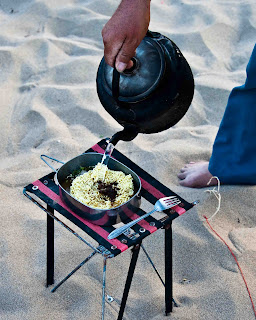 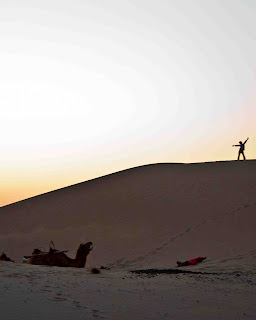 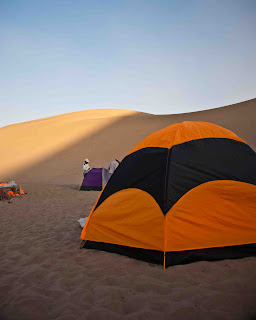 We have an extraordinary treat after dinner too - the sun is setting in the west and in the opposite direction the moon is rising over the dunes, pale yellow.

I'd love to tell you that sleeping in the desert is warm and soft, but in fact the opposite is true - it's cold and hard, and very uncomfortable. Can I really be in this much pain after only two hours of camel-riding? We sleep in our clothes, huddled together for warmth, waiting for the dawn. 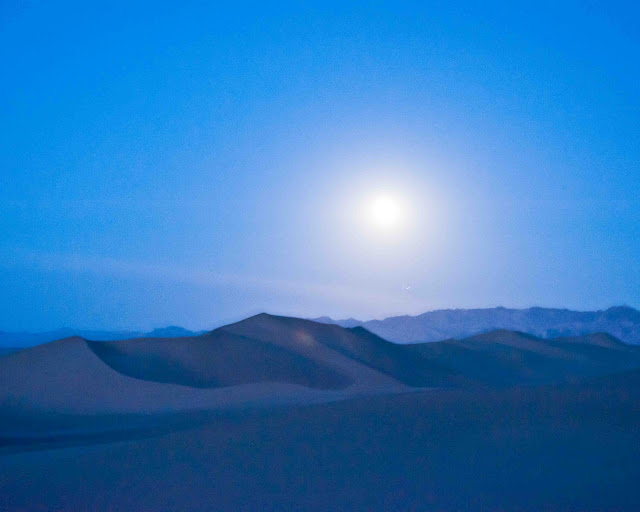 Today we will see the Lost Library of Dunhuang inside the Mogao Caves. The story of the Lost Library sends tingles up your spine. The caves, rich with Buddhist art spanning a thousand years, were abandoned in the 13th century, and slowly became sealed off with sand from the dunes. In the early twentieth century the self-appointed Taoist caretaker, Wang Yuanlu, began removing sand drifts blocking many of the cave entrances.

In 1900 he was sweeping deep sand away from the entrance to Cave 16 when he noticed a crack in the cave wall. Tapping on it, he realized it was hollow and with much excitement removed part of the wall to find a small antechamber crammed with tens of thousands of scrolls and manuscripts, an astounding archeological treasure trove. 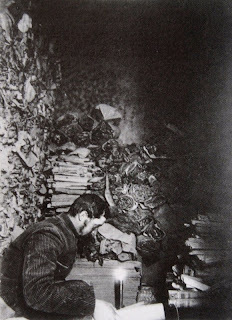 Hearing of the discovery, archeologists Auriel Stein and Paul Pelliot eventually convinced Wang to sell them thousands of manuscripts for paltry sums - 220 British pounds in all.

Many say the scrolls were stolen, many others say they were bought - regardless, they were taken out of China and are now spread amongst museums and private collections around the world.

The caves themselves are spectacular, but every visitor must be attended by a guide and in the interests of preservation is permitted to spend five minutes only in each cave, and see only eight of the seven hundred caves. It's a tantalising glimpse of the treasures within.

All carved by human hands out of the cliffs, some of the caves are small and intimate temples filled with statues of Buddha and his attendants, the walls adorned with a thousand painted Buddhas. Some are enormous and awe-inspiring, shaped like the inside of a pyramid, richly decorated with gold leaf and carvings.

But it's the library cave I most want to see. I stand in the dim light and quietness staring through the rough doorway into the tiny room, the actual Lost Library. It is barely large enough to hold a table and chairs, let alone one of the greatest collections of historical writings known to man.

On the wall is a faded painting of two Bodhi trees, side by side, their rounded leaves still green despite a thousand years passing since they were painted. It was worth every lurch of last four hours on the back of The Rogue to see this wonder of an ancient world.

All too soon we have rejoined Master Li and the camels. 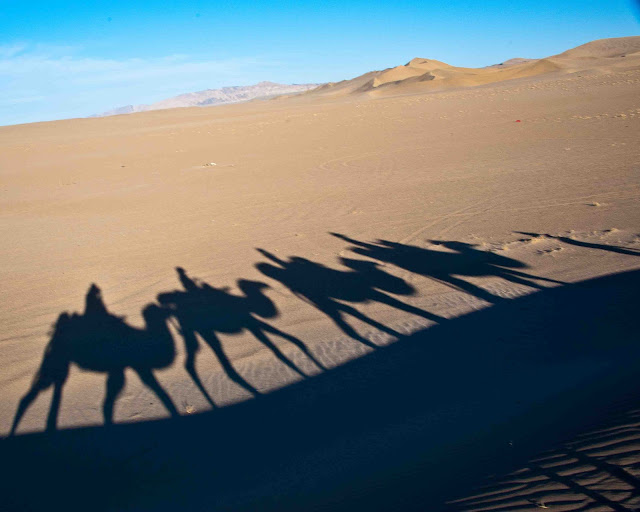 My camel's personality hasn't improved one bit by not seeing me for several hours - Master Li tells him 'Zuo! Zuo! ZUO!' "Sit! Sit! SIT!!' over and over again, so I can get on.

He never, ever sits until he's been told seven, or eight, or nine times, and then only after complaining in a loud hee-hawing sort of whine and snorting spit all over Master Li.

I ask Master Li if The Rogue has a problem with his legs (although it hasn't seemed evident).  No, he says, his shoulders slumping slightly in resignation - it's just his xing ge - temperament.

The Rogue wrenches his head around to look at me with his more bulging eye, as if to say 'Difficult? Moi?' 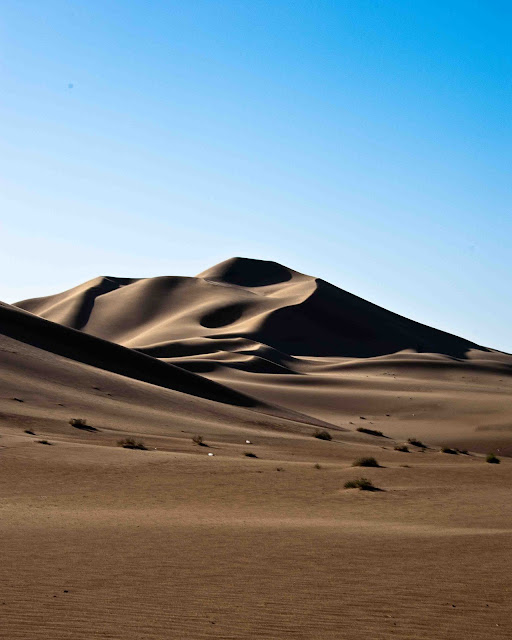 We have a long ride ahead - about four hours - to get back to camp, this time taking a route up through the dunes to their highest point.

So the camels can feed, Master Li unties them from one another, letting them roam free. The other three choose the greenest, freshest looking shrubs to eat but The Rogue stands off to the side eating dead thorny stuff and takes a nip at anyone who comes close. Friendly fellow he is, sociable as could be.

All of a sudden he takes a wrenching bite of some dead grass and with it a whole corsage of faded fabric funeral flowers, blown all the way from the desert graveyard. I try to stop him but they're gone in a second, every last one.

The other camels, stoic as ever, don't complain and tread softly, softly, sometimes sinking up to their knees in sand, sometimes walking over rocky patches to get us home to camp. If they seem tired, Master Li starts to sing to lull them onwards. 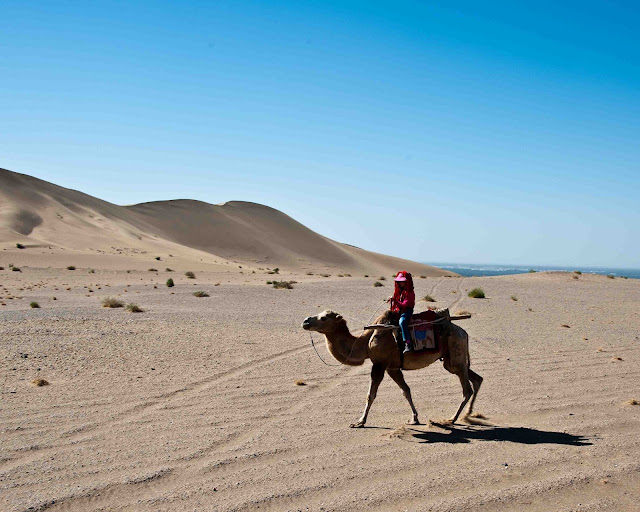 I'm in agony with every step, but my two daughters have taken to camel riding like they had previous lives as Bedouin princesses, tossing their long flowing scarves behind them and balancing perfectly as the camels run down the dunes. Sigh.

Increasing the Agony: Second Night in the Dunes 沙丘上的第二晚

Our camp is ready for us, which is just as well because after more than eight hours of camel-riding and awe-inspiring ancient caves I need sleep badly. My whole body is aching and sore and my saddle, in reality just two sticks either side of the camel's humps and a blanket, has come badly awry, meaning that I list to the side and have to balance by sticking the opposite leg out for traction. In my previous life I think I was possibly a peg-legged sailor. 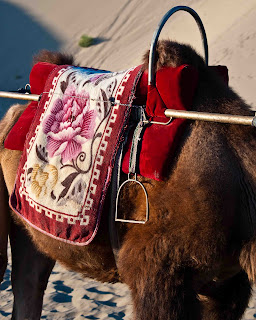 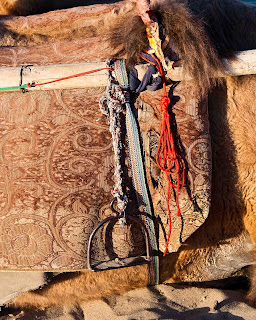 A beautiful camel saddle, belonging to someone else, and my saddle.

There are instant noodles for dinner again, and bread, now a little stale. I make a weak coffee with the last of my instant coffee powder and go and sit on the crest of the dune to see the moon rise. Every time I move a groan seems to escape my lips.

As I lie on the sand on this, our final night, my body in a new world of pain, I look up at the stars and imagine all the explorers, wanderers, pilgrims and traders who have gone before me through these dunes. This really is the magic of the ancient  Silk Road - the chance to take a little of its spirit of romance and adventure and make it your own. 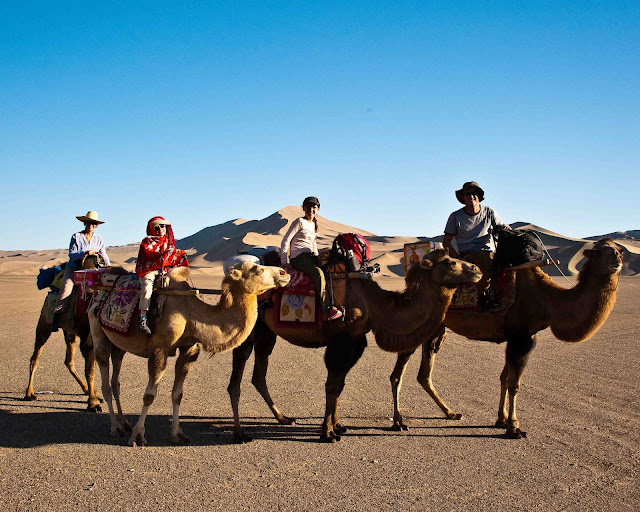 3 Day Camel Treks can be arranged through Charley Zhong's cafe in Dunhuang at a cost of 800 yuan per person including food and water but not including entry to Mogao Caves.

Mogao Caves, and the Lost Library of Dunhuang
Open 7 days
Entrance to a selection of eight caves 180 yuan per person, includes an English speaking guide (compulsory). Photographs and cameras forbidden. 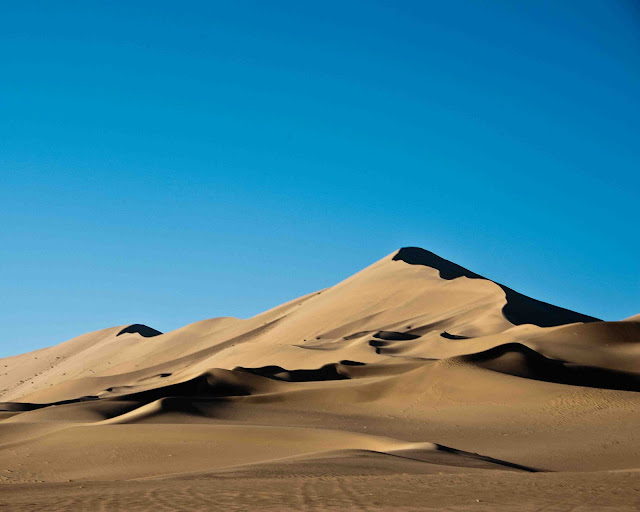