Murder, Madness and Sacrifice: An Ordinary Day in Hotan 杀戮、疯狂和牺牲：和田的普通一天 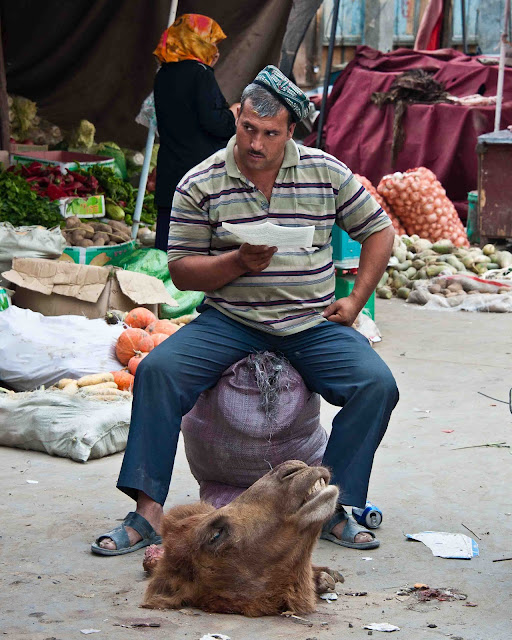 “Traveling is a brutality. It forces you to trust strangers and to lose sight of all that familiar comfort of home and friends. You are constantly off balance. Nothing is yours except the essential things – air, sleep, dreams, the sea, the sky – all things tending towards the eternal or what we imagine of it.”
– Cesare Pavese, Italian writer.

There are days on this long journey filled with so many unusual and confronting experiences they leave my head spinning with seismic shifts of perception. The world as I know it seems to have so very little in common with the world in which I now find myself.

We had travelled for hours through harsh and featureless desert to reach Hotan, a small city far from everywhere on the southern edge of the cruel, vast Taklamikan Desert. Hotan looms out of a dust storm haze like a true frontier town, a tumble of mid-size half-finished buildings and a mayhem of motorbikes, donkey carts and tray-back tricycle taxis, all covered in a fine layer of pale silt.

We had come to see the weekly market, reported to be the biggest and best in Xinjiang, rivaling all others for colour and spectacle. But the days in Hotan bring a series of unexpected and unrelated happenings, at once disarming and thought-provoking, and the events smack me around the head for days afterwards with the question of what defines normal.

As off-balance as they make me feel, I try and bend and shape the experiences in my head until they fit - very poorly and uncomfortably - into my own view of the world. Normality is, of course, simply a construct with parameters defined according to your place of birth and your cultural background. We're always trying to find the common in the uncommon as a way of minimising the distance of our human experiences.

And it turns out that what is extraordinary for me is just another day in Hotan.

Seeing a severed camel head on the ground, a small pool of blood forming around it, has never in my own experience been an event of ordinary measure. And yet here people were, walking around it carrying bags of shopping, a mere severed head a matter of no note.

I had been with the camels earlier in the day at the animal market on the edge of town, fifty or sixty of the magnificent beasts in a large outdoor yard waiting to be bought and sold.

Every Sunday in Hotan farmers come from near and far with animals to sell - goats, sheep, yaks, cattle and donkeys. The streets leading in to the market are lined with livestock in makeshift pens, tied to fence posts or the undercarriage of parked trucks. Now and again a skittery animal escapes, careering and butting its way through dense crowds of people and other animals before being captured and tied up again.

We work our way through the noise, crowds and dust to the inner part of the market. Here, all the sheep are being weighed one by one, bundled like babies into baskets made from old truck tyres resting on sets of industrial scales. The sheep's weight is recorded in a small notebook by a heavy man sitting on the fence, and once the weight is known, deals are struck quickly and animals are passed from farmer to butcher. The sheep are bleating and panicky. Do they know it will soon be all over for them? 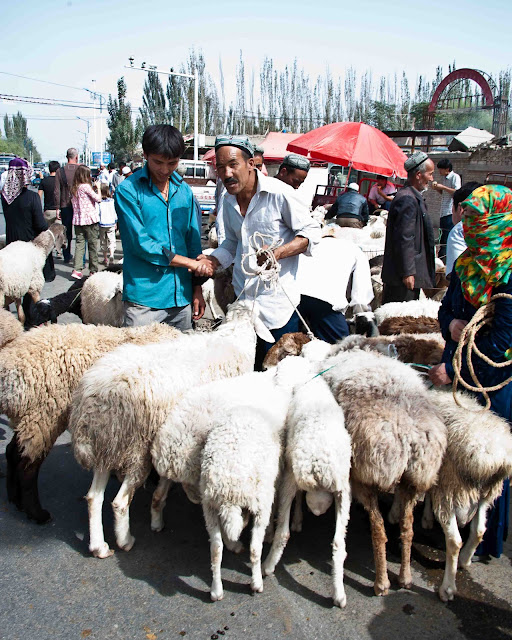 In another section are the donkeys, braying and kicking and making it very difficult for any potential buyers to get a good look at their teeth, as potential buyers like to do. Next to them is the yak pen, the well-behaved long-haired black beasts standing around quietly, occasionally shifting their feet slightly.

The camels are in the far corner, tall, silent and imposing. There are no bad-mannered rogues here - the fur of these camels is clean and sleek, their eyes shining, covered with long, curved eyelashes. A chocolate coloured mother and her nougat coloured calf watch me with big dark eyes. I could walk straight under the mother's chin without stooping. 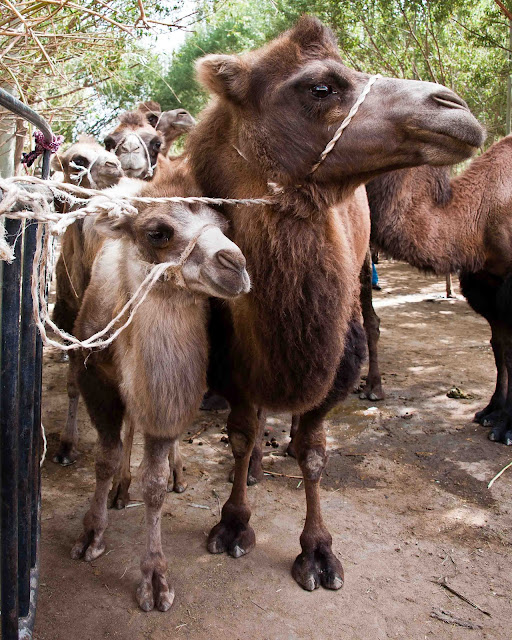 But there is no room for sentimentality here - these camels are being sold for their meat, as well as for farm work. Camel meat is readily available in these parts and when I return to the Sunday Bazaar that afternoon, there is a severed camel's head in front of the butcher's stall, with a severed horse's head at the horse meat stall next door.

They look violent and bloody, macabre and unwelcome. I berate myself for being soft - meat is meat, and why is a camel or horse more majestic than a yak or a cow?

But I see the eyelashes on the dead, cold eyes, and the butcher sits by, uncaring. 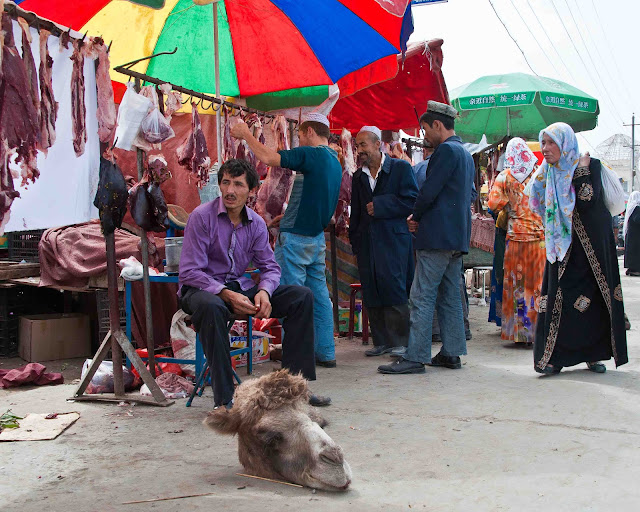 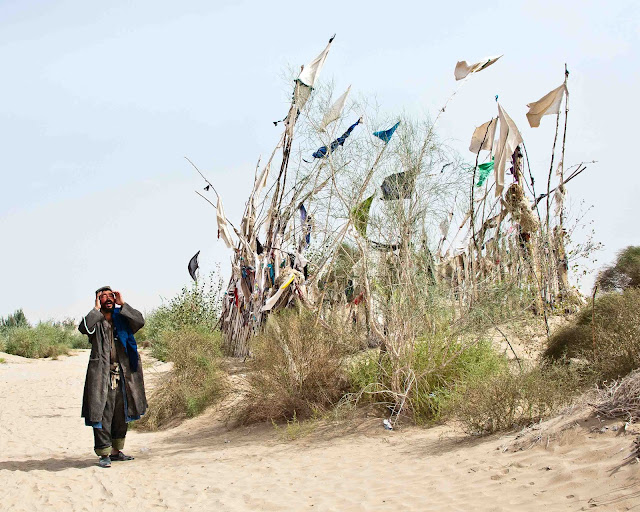 Outside Hotan in the midst of desert lies a small mosque, all but swallowed by the dunes, and the thousand year old tomb of Islamic missionary Imam Asism, covered with flags.

The mosque openly welcomes the poor, the weak, and the estranged without reservation, and is well known as a place of charity amongst local people. Although it is clearly not wealthy, those needing help are taken in - a situation no longer the case in many other holy places around the world.

Several homeless people are resting under bushes outside the mosque, their belongings tucked about them, waiting for lunch. I notice a young bearded man dressed in a winter coat, far too heavy for the desert heat, carrying prayer beads and speaking loudly to himself as he walks up and down beside one of the tombs.

Earlier someone had asked for a small donation for visiting, and invoked the wrath of the mosque's Imam who made him return the tiny amount on the grounds that the mosque and tombs should be open and free for all, Muslim or not.

The young coated man had watched it all happen and now walked back and forth repeating to himself over and over "The Imam said he shouldn't do it, but he did, he did ask those people for money and the Imam said it wasn't right. And you're good Muslims, you're bringing your daughters here to be good Muslims." Over and over, with great emotion. Back and forth, in the hot sun, in his heavy coat.

Mental illness is hidden in China. Not spoken of, except obliquely, and not seen. Not acknowledged, not accepted. Yet here in this out of the way mosque were a small legion of men whose madness took the form of religious fervour, and who were accepted and cared for by the local Islamic community without question. 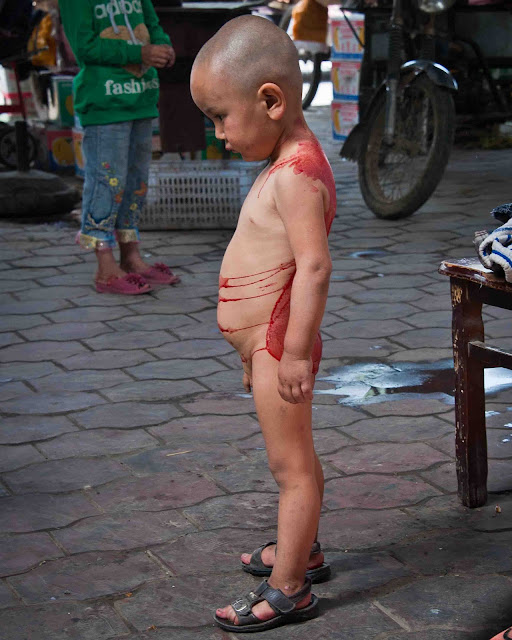 Later in the day I'm seated at a busy restaurant stall in the shaded part of the bazaar when I see the most extraordinary sight - a small boy, perhaps two or three years old, completely naked except for his shoes, his back and buttocks smeared with fresh blood. He's quite happy, and not apparently injured - teasing his older brother and behaving like any normal three year old boy.

I wonder if they are playing a joke with the blood from a nearby fish stall, when I see what's happening. His older brother, maybe ten, is being told by his mother to take off his shirt. He doesn't want to do it, but she's making him. His grandfather is sitting nearby on a low stool in the open area outside the restaurant, a long, shining narrow knife in his hand. Besides his mother and grandfather there is an aunt and a small girl baby.

The boy is told to lie face down on the mat - he doesn't want to do it, but his mother is pushing him down by his shoulders. His grandfather and the others are crowded around him, the glint of the knife visible between their bodies. I feel a rising sense of panic, but our guide tells us it's alright. Don't worry. Sit back down.

But I rise from my seat because I can't push away the feeling of alarm - the knife, the blood, the unwillingness of the boy - even though we are in the middle of a busy bazaar in broad daylight on the busiest day of the week, and no one else but me seems to have noticed anything amiss. There are at least fifty people in the immediate vicinity, most of them eating, apparently oblivious.

I walk quickly over to the small group just in time to see a grey pigeon taken out of a cage on the ground and passed to the grandfather. He holds it over the boy's back and quickly slits the bird's throat,  the sticky dripping blood smeared over the skin of the boy's back by the hands of his mother and aunt.

He stands now, his back dripping with blood, and comes to sit sullenly in a corner, back hunched over, elbows resting on knees, glaring at me as if to say "I didn't want to take part in this stupid thing". 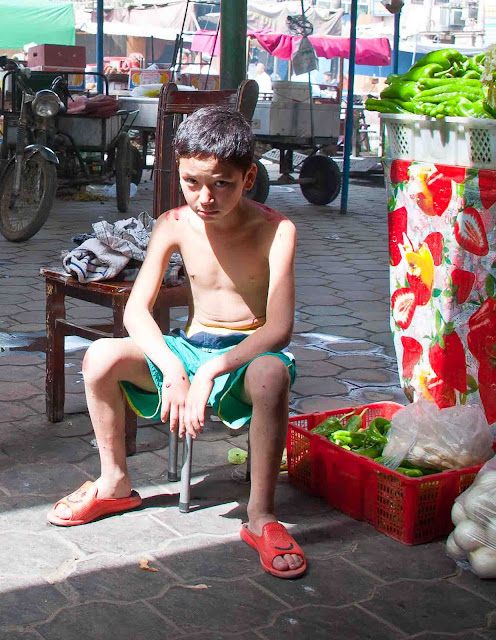 With exquisite timing unique to small boys, his little brother walks over and stands with his legs slightly apart and urinates on the ground near his big brother's feet, daring him to do something about it. He doesn't.

I have absolutely no idea of the meaning behind what's going on but I can see now that although the pigeons are in danger, the children are not. I can't take my eyes away - the baby girl is next, undressed and held face down while the pigeon sacrifice is repeated, the blood smeared again. The dead pigeon joins a pile of its fellows on the mat. 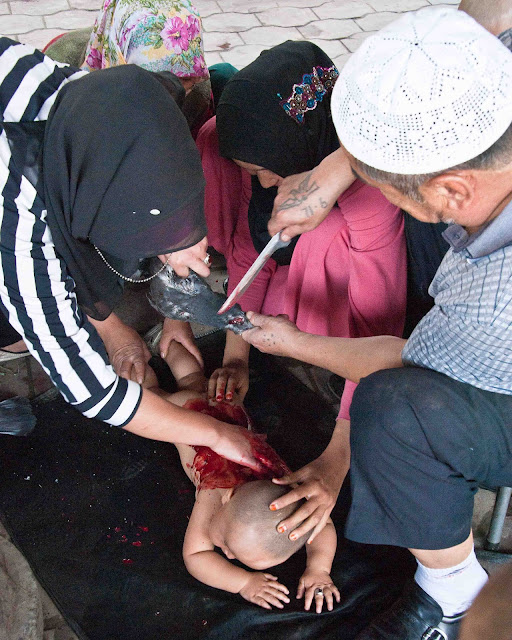 The blood of the last pigeon is smeared on the legs of the mother and aunt, not a drop wasted. Then the mother picks up the four dead pigeons by the legs and takes them into the restaurant to be plucked.

Our guide Waheed says the blood adds heat to the body, and for children is especially protective against illness. He tells us some Uyghurs believe the blood is very warming but only when applied to the skin - the meat is 'warming' to the body internally when eaten. I find myself wondering if the same principle applies in traditional Chinese medicine, with the emphasis it places on warming and cooling foods.

Now the young boy is sitting on the ground next to our table playing with a toy car, and his older brother has begun peeling a sack of white onions for his grandmother, who stands cooking next to him on the outdoor wok. Ritual over, routine has returned and there is a restaurant to be run.

Except for me, of course - how can I be the same again after seeing an extraordinary sight like that? I struggle to make some sense of it all against my own feelings of revulsion, fascination, and intrigue. Is there something in my memory with which I can normalise what I've just seen?

I think of my great-grandmother, dosing us all with a toxic brown 'tonic' in the firm belief it would keep us healthy. Was this really so very different?

Now the three year old is scratching at the itch made by the tightening of the drying blood, crescents of dark dried blood under his little fingernails. He gives me a long, searching look - as though noticing me for the very first time and realizing I'm not a normal part of his daily landscape. Perhaps he'll later tell his father about the very strange-looking woman he saw at lunchtime, with her strangely dressed husband and children, and the odd way they sounded when they spoke. Normality is all relative.