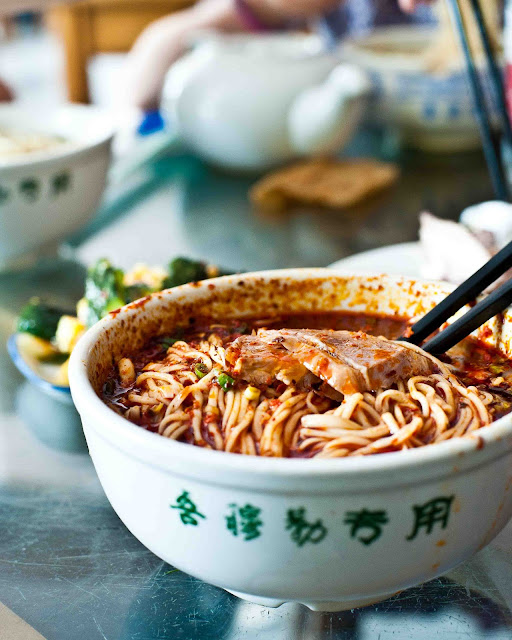 I'm on a mission: to find the best hand-pulled beef noodles (niurou lamian 牛肉拉面) in Lanzhou.

Actually, hang it - in all of China, but Lanzhou is the obvious place to start - I mean, it's the home of niurou lamian, the world famous noodle soup dish with the heady aromatic broth, mind-blowing la jiao chili paste, coriander, and fine slices of beef, so full of spice and flavour it will satisfy you every day for a year.

As long-time readers of this blog will know, finding the best of anything is no easy feat, and I have previously tried and failed to find Lanzhou's best lamian, but you know, I'm no quitter. I'm back again to give it another shot.

Lanzhou is a sprawling big, busy, dirty city, the capital of staggeringly beautiful Gansu Province, home to the thousands of Hui Muslims with whom this dish is synonymous, and also home to thousands of lamian restaurants. It also happens to be on the ancient Silk Road, where our route westward to Kashgar is taking us.

Luckily, after our last trip to Lanzhou (and on the advice of several people since) I knew that the best noodles in the city were reportedly at Mazilu Niurou Mian, so with empty bellies and a raging hunger we jumped in a taxi and asked the driver to take us to the closest Mazilu restaurant.

'Really?' he said, looking crestfallen. 'It's just over there!' pointing to the other side of the huge intersection where we had flagged him down.

'I thought it was near the White Temple...' I said.

'There is one there too' he replied, nodding.

'Just how many Mazilu restaurants are there?' I asked.

'Well, just take us to the best one. Or...um...the original one.' Original is always good, in my books. The taxi driver, by now mistaking me for someoe who could actually speak Chinese, reverted to a broad local dialect as he continued.

'Well, the original one is by .....(unintelligible address) and there's also a good one right next to...(another unintelligible location). Which one do you want?

'Let's just go to wherever you think has the best lamian' I said, by now acutely aware that we had circled a whole block without deciding on a destination.

'Well, if you want the best, and you want my opinion, then we'll go straight to Wumule. It's a laozihao'

Just like crack cocaine those words are. Crack cocaine. The best lamian. Laozihao.

Laozihao 老字号 means 'time-honoured brand' and for a Chinese foodie it's the equivalent of the German wurst shop that's been making sausages the exact same wonderful way for 110 years, or the artisanal cheesemaker who learned to make the best chevre from a traditional recipe. Laozihao denotes quality and a definite pride in food-making, usually with a long and distinguished history.

We drove westwards along the very high and fast-flowing Yellow River for half an hour away from Lanzhou's centre and towards its western outskirts before pulling up alongside a nondescript building with floor to ceiling glass windows fronting the street.

'Here it is!' the driver said, and deposited us on the footpath just as a stream of Hui Muslims, white caps in place, came out of the front door. Their surprise at seeing us was obvious, but they also seemed delighted that we had made our way to their far-away lamian restaurant.

Inside, the restaurant was light and airy and had all the signs of a great place to eat: queues for the cashier, queues for noodles, queues for tables, and crowds of happy-looking diners leaving through clouds of steam billowing from the kitchen.

I was swept along on a human tide towards the front counter, battling the crowds of people and at the same time trying to decipher the blackboard menu before it was my turn to order.


All I could make out under pressure was:

And then all of a sudden, I was next. Behind the counter was a 180 year old man manning the cash register, and his younger and sprightlier son taking orders.

'Hey!' said the son with a big smile. 'What will you be having?' and without drawing breath he went on to say 'How about four bowls of noodles and 200g of beef? Done?' Done.

'Beef over there!' he said, pointing to a heavy-set woman off to one side with a huge cleaver in her hand.

'Noodles that way!' he beamed, pointing to the lengthening queue at the noodle kitchen.

'Small dishes behind me!' he said, pointing over his shoulder to the separate kitchen for pickles and vegetable dishes.

My hand filled with several small white tickets, one for each component of my lamian meal. For the best lamian you can't just dump everything in a big soup bowl, you have your spicy noodle soup accompanied by dainty plates of side dishes with pleasing, contrasting tastes and textures designed to offset the searing heat of the noodles. Noodles, beef slices, cold dishes and pickles.

But not in that order....no point in first collecting a huge steaming bowl of scalding-hot noodles only to carry them around the restaurant while you collect assorted sides from the 'small dishes' counter and 'beef' counter. No, no, no. 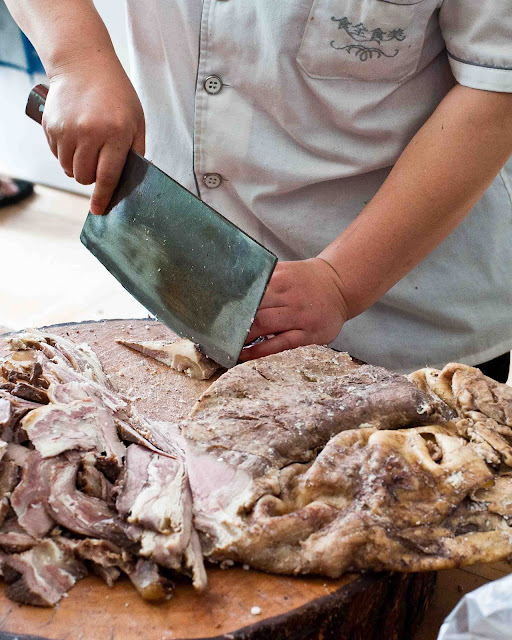 Roast beef first, sliced with that huge and heavy cleaver into wafer thin slices, weighed on old-fashioned scales and tipped onto a small plate. 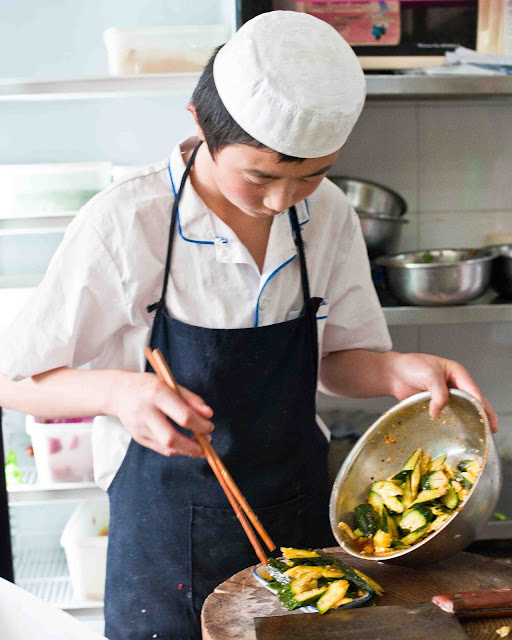 Next: small dishes - a smorgasbord of small plates filled with a variety of spiced pickles, vegetables or finely sliced liver, all served cold. I filled our tray with sides of fuchsia-pink radish dressed with garlic, vinegar and coriander, and crunchy cold cucumber with chili and sesame oil. 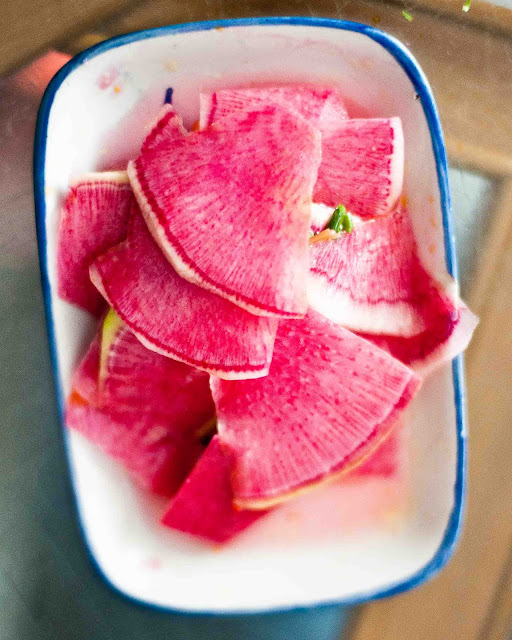 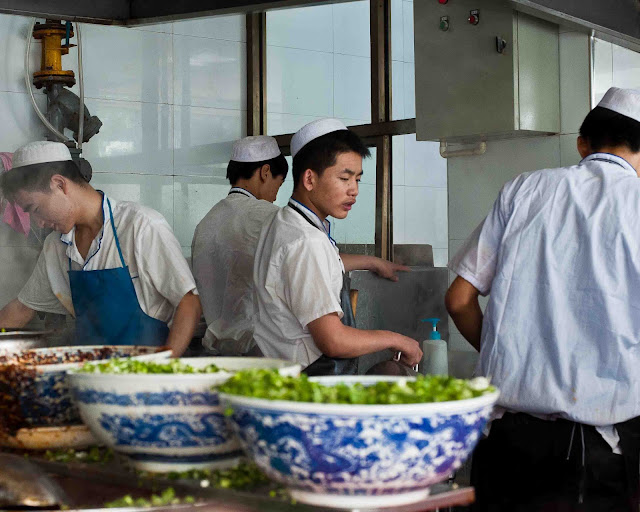 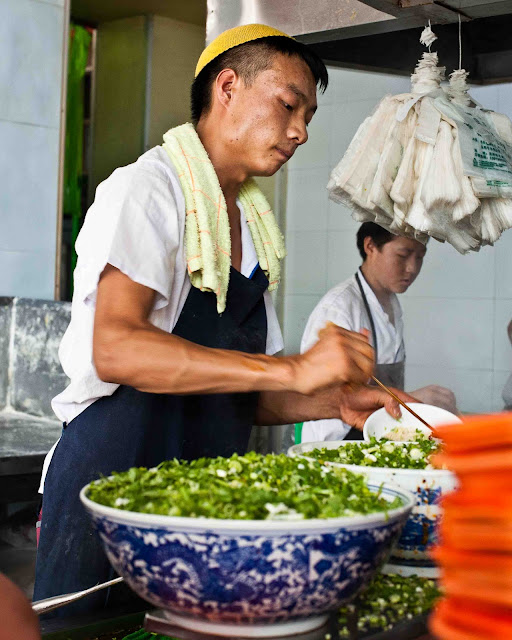 Lastly - time to nab a table, leaving the small dishes there alone, and join the snaking queue at the window of the noodle kitchen right in the restaurant's centre.

Regular customers call out their orders from way back in the line - 'extra thick noodles!' 'more lajiao!' 'no coriander!'

Inside the kitchen the noodle-pullers, three on one side of the central cooktop and four on the other, work in steamy conditions at a fierce pace pulling noodles, while the last cook in line ladles boiling hot broth into bowls with spoons of radish, scallions, lajiao and lastly hot noodles added at lightning speed. 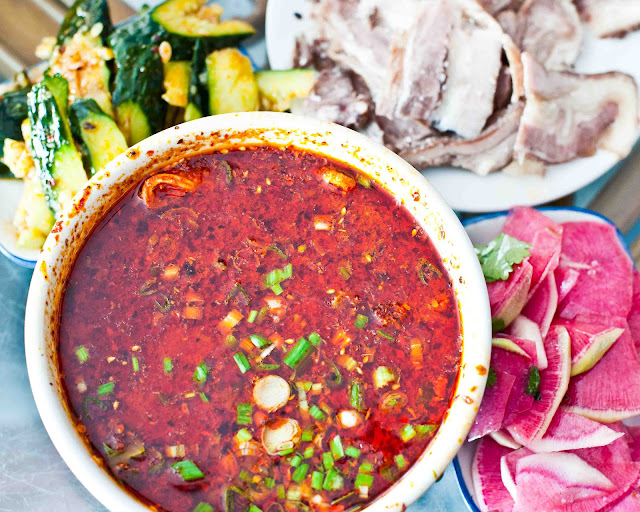 I took my bowl, swimming with chili oil and smelling incredible.

I took my seat and prepared to sweat, just like the diners all around me.

The first mouthful of smooth soft noodles went down easily until the chili suddenly hit me. I began to sweat. My nose ran. My cheeks flushed. I kept eating.

Those noodles were excellent - full of flavour, rich and oily, the broth savoury and aromatic.
All around me noodles were being slurped, sipped, and sucked down noisily with great satisfaction. Trickles of sweat poured from faces on all sides. I crunched on my side dishes to relieve the heat.

Between mouthfuls of hot soup I noticed a large gold plaque on the wall:

So that was it - the odyssey was over and I had finally found Lanzhou's best lamian.  What a relief....at least until next year, when the lamian committee will assign a new title. Oh well, looks like another trip back to Lanzhou is on the cards. Anyone care to join me in August 2013? 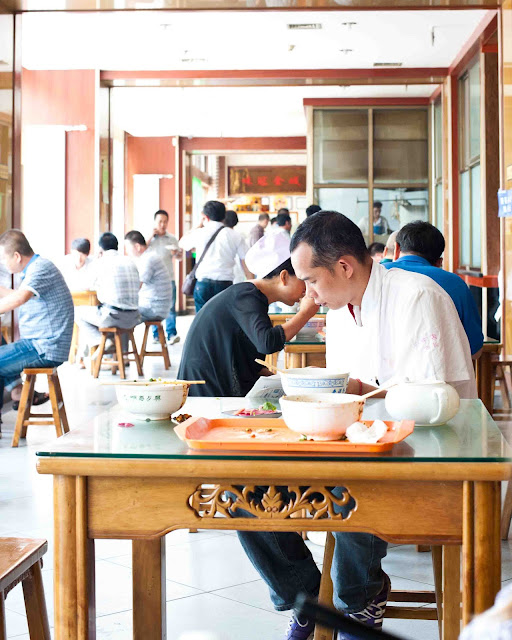