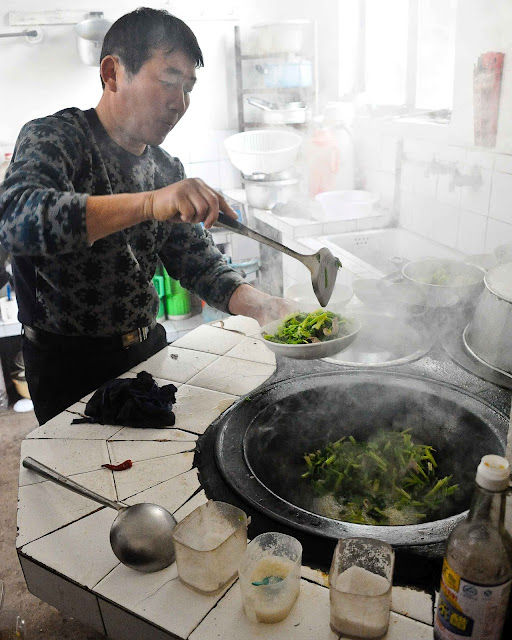 It's half an hour past midday, late by Chinese lunch standards. A whole hour late actually - lunch generally beginning at the barely-finished-breakfast time of eleven thirty - so everyone in the smoke-filled kitchen is starving and beginning to steal bits of food from the bowls covering the square wooden tea table, dressed with a piece of pale blue floral sheet. They're all hoping the cook won't notice.

The cook meanwhile, has a huge fire-breathing machine to control, a square squat black and white patterned dragon in the corner of the room puffing smoke and steam and full of fire, and he's trying to tame it enough to get the lunch finished so we can all sit down and eat.

I'm in the farmhouse kitchen of the Xu family, along with eight neighbours, relatives and friends who have stopped by to see what's for lunch, and the dragon is the wok stove that takes pride of place in every eastern Chinese farm kitchen, a rather lovely hand-painted beast of a thing. After a morning visiting the local market and farms of Farmer Feng and her neighbours, I'm having a home-cooked farm-style lunch and spending the afternon seeing the farms of the extended Xu family and their neighbours. 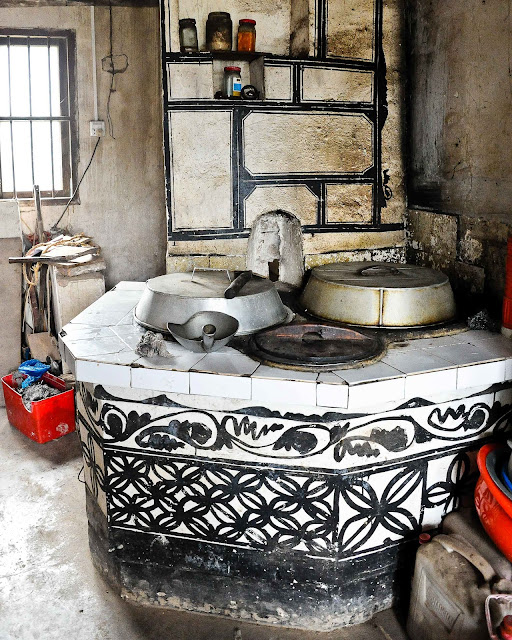 I'm very taken by these big Chinese farmhouse stoves though, and the skill needed to cook with them. This one (in Farmer Feng's kitchen) is typical, with it's simple painted designs and chimney recessed to hold sauces and condiments. Made from rammed earth then tiled and painted, the stoves are so enormous that farmhouse kitchens tend to be enormous too, just to fit them in. I've come across some really beautifully decorated and painted ones, like the stove at a peach farm I visited, but others are very simple and functional.

The stove usually has three deep indentations set into its broad top, for two large woks and one small one. The woks, seasoned to a deep bronze-black patina, are divided up according to their purpose - one for stir-frying, and the others for boiling water or steaming.

The stove backs onto a small alcove behind the chimney and has two long narrow fireplaces about the thickness and length of a man's arm, each fireplace leading to the spot directly underneath one of the two large woks. The fireplaces are fed with a stash of dried bamboo and straw standing in the chimney corner. 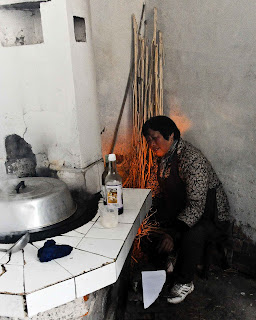 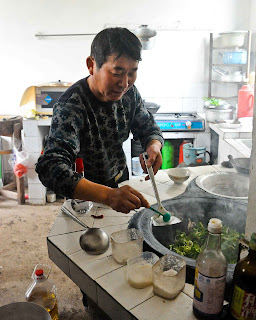 Cooking on a wood-fired wok stove is way more complicated than just turning the gas up or down, and it requires a lot more skill, but here's how it works. Cooking is a two man affair, with the cook standing in front of the stove tossing ingredients into one of the two woks at great speed, and calling out to the second 'cook' the necessary instructions - 'more heat!' 'less heat!' 'fast heat!!' and so on.

The second cook sits facing the fireplaces, feeding in bamboo at the required speed for the level of heat. When a really high heat is needed, she works a small electric bellows which draws air through a side vent, magnifying the fire massively (I guess in other farms manual bellows might still exist, although I've never seen them used).

Meanwhile, the kitchen is dense with smoke, steam and heat, and the dishes are coming out to the table at a great rate of knots. Every single thing we're eating today has been pulled out of the earth this morning.

The pale blue duck eggs, collected today and given to me earlier by Farmer Feng, are going in the soup. The eight different vegetable dishes have come from vegetables picked less than thirty metres from the kitchen - baby celery, fresh scallions and garlic, spinach, bok choy. Many I've never seen before including a claw-shaped, multiheaded vegetable called wa-wa cai or baby vegetable, shown below. 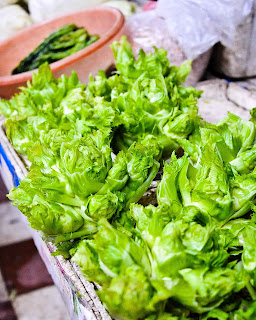 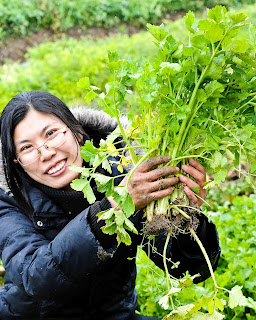 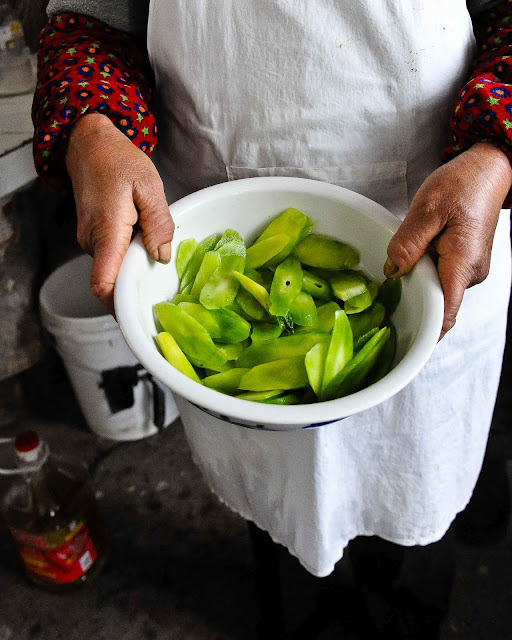 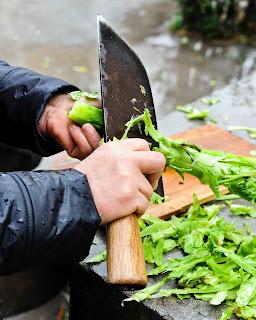 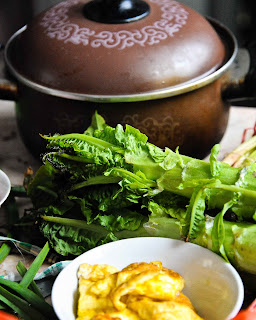 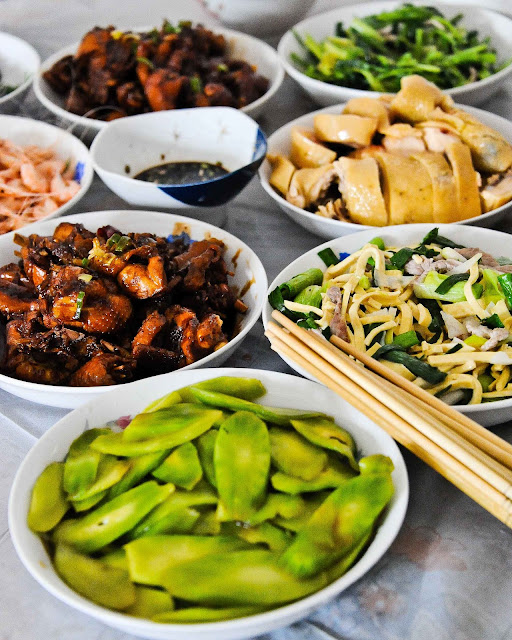 It's quite some spread! White-poached chicken with a soy dipping sauce, and hong shao ji  (red-cooked chicken) in a sweet, sticky soy reduction are both on the table (the chickens freshly dispatched an hour prior) along with crisp fried local fish, and a parade of fabulous vegetable dishes, each one simply cooked to show off the wonderful fresh-out-of-the-ground flavours. Duck egg soup with tomatoes and slices of radish, Stir-fried spinach with finely shredded tofu and a little pork, and the baby vegetable, boiled first to soften it, then gently stir-fried in the wok with a pinch of salt and a touch of oil. It has a forgettable mushy appearance but the flavour I like - a cross between a really fresh brussel sprout and cabbage. That may not be the most attractive description, on reflection, but I did enjoy it! 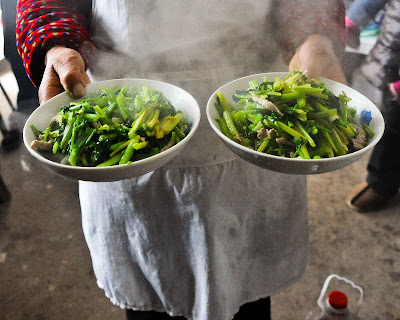 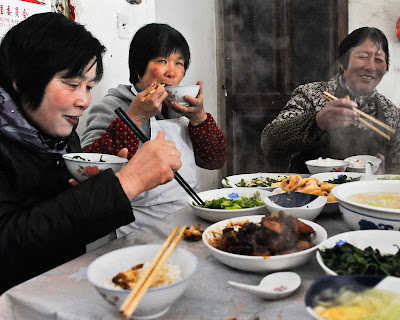 As did all the assembled neighbours - Wang Ayi (Auntie Wang) in the centre, her cheeks marked from years of winter work outdoors, spent the entire meal negotiating with me to find her single 29 year old son a wife. The foreigner the better, she thought, seeing as he'd so far failed to find a Chinese wife and produce any grandchildren. Twenty nine! she exclaimed. 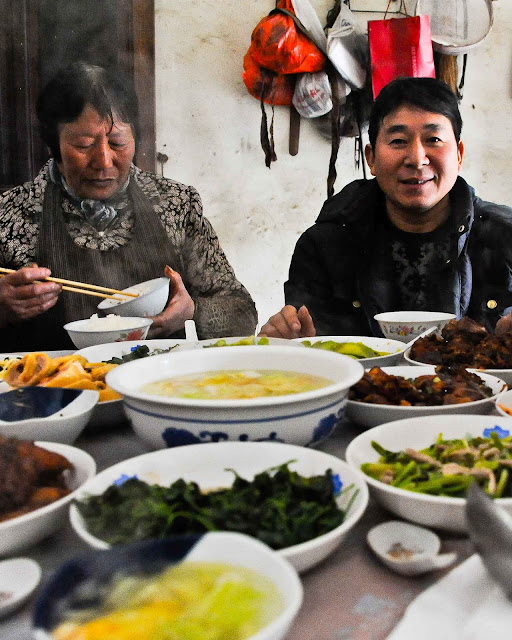 And heartfelt thanks for a memorable meal to our wonderful two cooks - Xu Ayi, who controlled that fire so well, and Cook Wang who tamed the dragon in the kitchen and sent forth dish after dish of fresh, simple, delicious food. Don't you wish you could eat like this everyday?