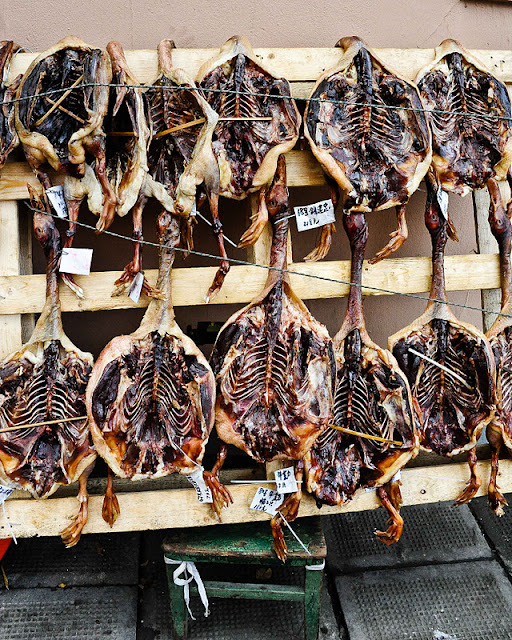 Well, if there are rows of flayed ducks lining the streets, then it must be Chinese New Year. The whole city has been transformed into an enormous outdoor charcuterie - every footpath is lined with makeshift wooden frames covered with the oddly attractive looking bodies of drying ducks, head and feet intact, tiny ribcages on display. The ducks are tagged around the neck or one webbed foot with the name of the purchaser so that when they're ready (five or six days, in cold dry weather) they can be collected.

Look up as you walk and instead of ducks you'll see doorstop-sized hunks of pork, soaked in brine and drying in the cold winter air, pierced with bent wire coathangers and hung alongside the week's washing.

There is a terrific do-it-yourself aspect to all of this - just the same way my mother still makes her own Christmas puddings every year, many families in Shanghai follow in an age-old tradition and make their own dried goods for Chinese New Year. 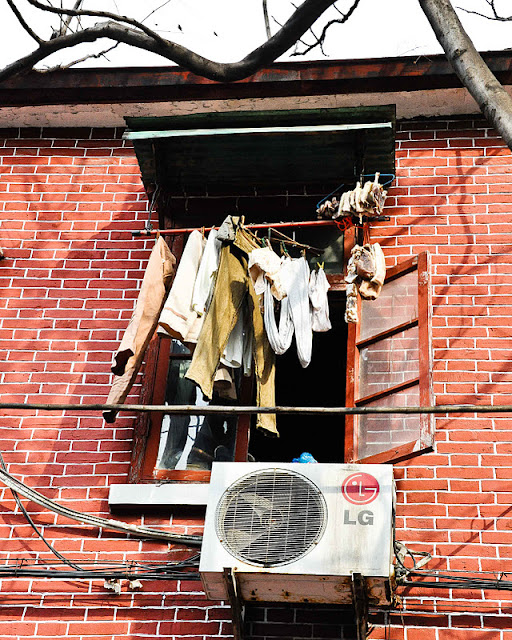 Back in Shanghai watching the Chinese New Year preparations hot up, I can tell you there is a world of dried meat involved. I've been trawling the internet for hours trying to get to the bottom of the whole dried fish, dried duck, dried pork, dried sausage and dried chicken thing, but needless to say there will be thousands of years of tradition and a deep degree of symbolism behind it, much more than I could ever understand. I guess it tastes pretty good too.

The fish I can understand, because the word for fish (鱼 yú) sounds just the same as the word for prosperity or surplus (余 yú). So you should eat some fish, not all of it mind, and you'll be sure to have a surplus of wealth in the new year. The favoured fish around town is an alarming looking giant eel, split neatly down the middle, flattened like a skateboard and strung up on a clothes rail in the street to dry, like an enormous sharply toothed silver sail. 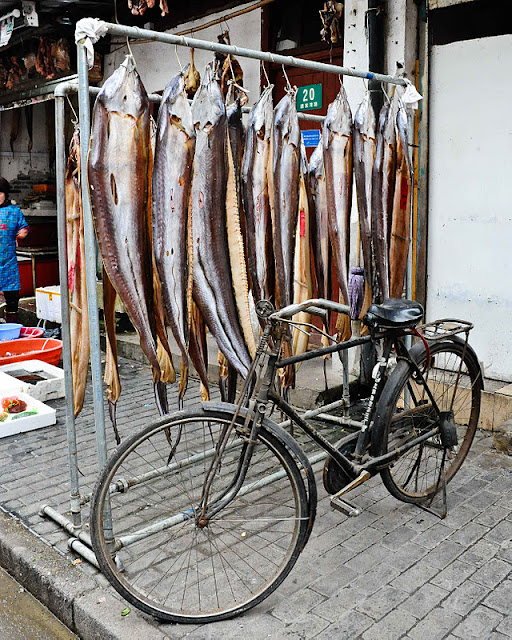 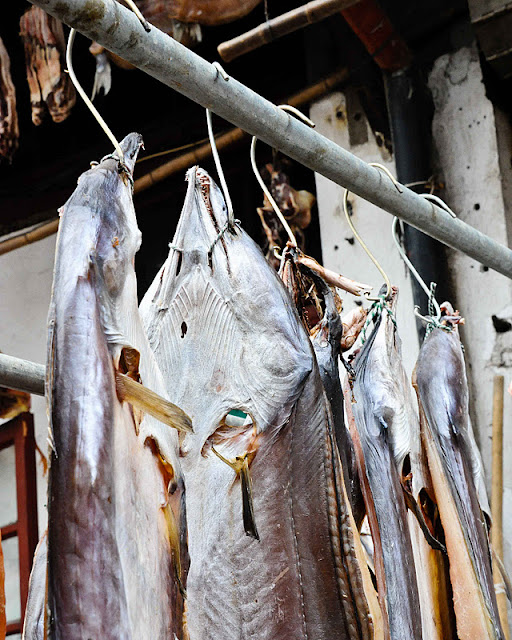 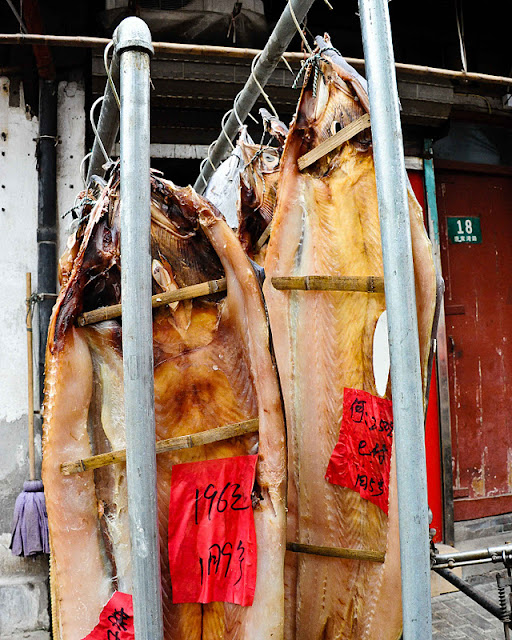 My neighbours, previouly unknown to me as charcuterie experts, have been drying ham and stuffing their own strings of Chinese sausage for weeks now, draped over their balcony rails or hung neatly under their air-conditioning unit for protection. I'm unsure what kind of protection the exhaust vent from an airconditioner box offers, exactly, but it is a neat place to hang stuff.

The sausage is pleasingly attractive, all knobbly with hunks of meat and large pieces of fat. The butcher shops have taken to hanging theirs in festive red and white garlands strung between telephone poles or conveniently placed trees outside their shops, where the passing traffic can see their wares and the sausage can catch a few fumes for extra flavour.

What I really love though, are the ducks. The first time you walk outdoors and see the weirdly flattened shovel shape of a drying duck it is rather confronting to those of us accustomed to having our smallgoods prepared out of sight and away from inclement weather.

Why outdoors? Well, I suppose it's partly a question of space, and finding somehwere with good airflow - the charcuterie experts among you will know about that. If there was plenty of space to be had in a city of twenty million people, why would you decide to hang your ducks under a high-voltage transformer to dry, for instance? One short-circuit and.....boom! Charcoal. 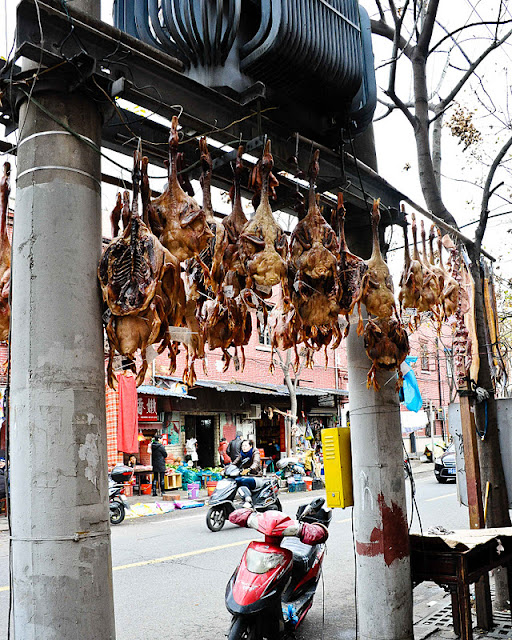 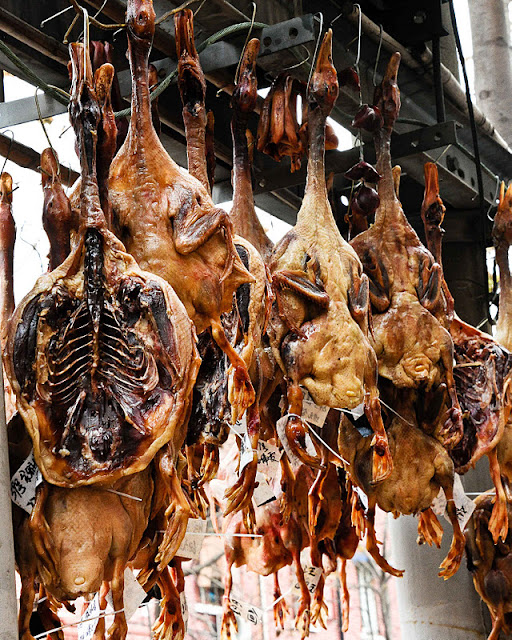 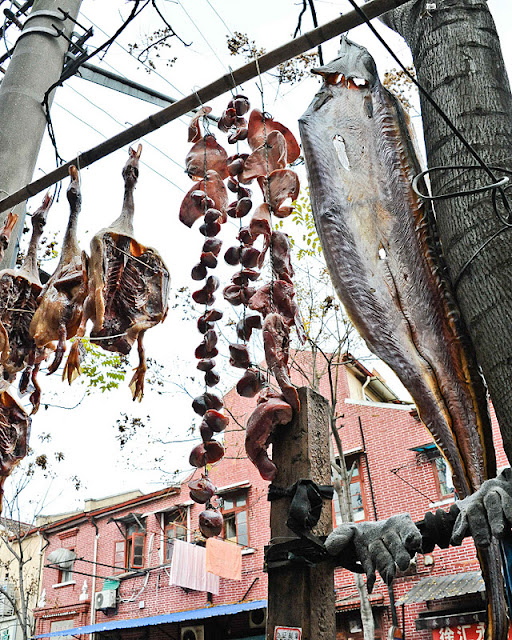 Next to the ducks hang funny little strings of baubles, but on closer inspection they turn out to be drying hearts, kidneys and livers, out of reach of the neighbourhood cats. Not a thing is wasted, everything can be rendered tasty.

My Chinese friends tell me that seeing ducks and eels out to dry is the seasonal equivalent, for them, of seeing Christmas trees appear in the shops for us. It means a time of delicious food and togetherness is coming and you can feel the goodwill and excitement building out on the streets. In less than a week, families will come together, cook wonderful meals and share the news of the last year with each other. And some dried eel.