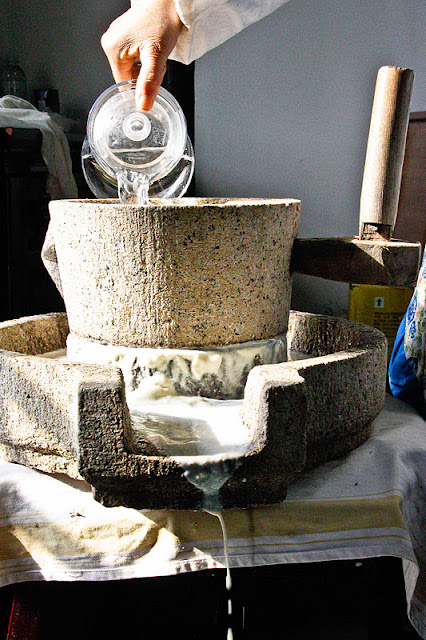 Winter has taken grip outside, but inside the cottage spinning the wooden handle of the old stone grinding wheel, I'm starting to build up quite a sweat. A trickle of creamy soy milk is dripping from the heavy grinding stone into the basin below, drop by drop, and it already smells good.

The mysteries of soy milk (dòujiăng 豆浆) and how it is created from soy beans have puzzled me for some time, although never for long enough to actually do some reading or research about it (shame on me). Doubtless for any of this blog's Chinese readers it will be no mystery whatever, but I didn't grow up drinking sweetened or savoury soy milk for breakfast everyday and I didn't even know that making soy milk is the first step in making tofu (more shame on me!). When the opportunity came to actually make soy milk myself this weekend I jumped at the chance to see how it was done and learn more, and I could hardly have asked for a better teacher. 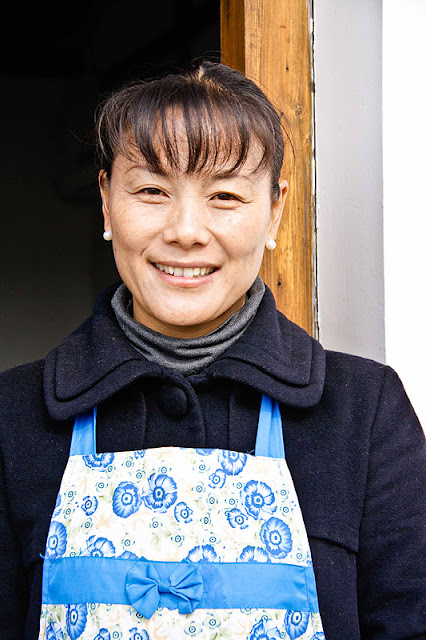 This is Ah Ping, who lives in the loveliest little white-washed stone cottage on the shores of Yangcheng Lake, where she entertains guests of the nearby hotel by showing them how to make soy milk the traditional way, using organic dried soybeans grown on the hotel's own impressively large organic farm. Ah Ping is also the apiarist who takes care of the nearby beehives, producing a delicious dark local honey, and a great farm-style cook. 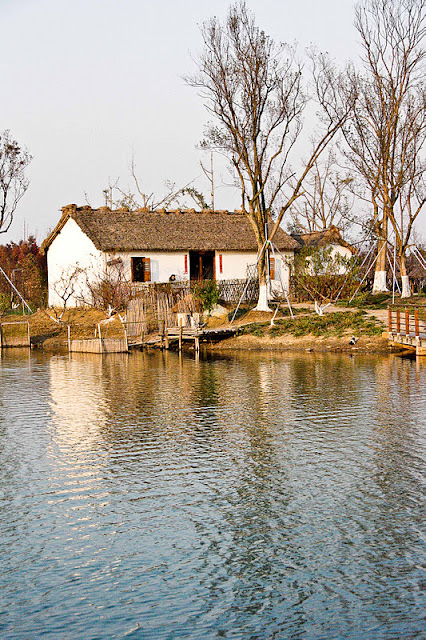 Yangcheng Lake is home to the world's best hairy crab thanks to its clean, deep waters, and because of the fairly strict (for China) management of the lake's valuable natural resources it has become an area of increasing interest to Chinese foodies for its nearby organic farms and food producers. More and more Chinese people are developing an interest in where food comes from and how it is grown, an interest in no small part fuelled by frequent food scandals and disasters.

I walk into Ah Ping's neat three-roomed cottage. The sun is streaming through the open lattice windows onto a small settle by the window where the heavy stone grinder sits. It has a circular top with a stout wooden handle to one side, and a small hole for placing the soy beans and water. This top stone rotates over the lower grinding stone as you turn the handle, and the resulting soy milk trickles between the two stones into a circular stone trough, and over the lip of the trough into a basin placed below it. It must weigh a tonne and I ask Ah Ping whether anyone still keeps such a heavy piece of equipment in their home. 'Nearly everyone who makes their own soy milk now uses a small electric machine' she tells me, 'but in the countryside some people still use these grinding stones.' 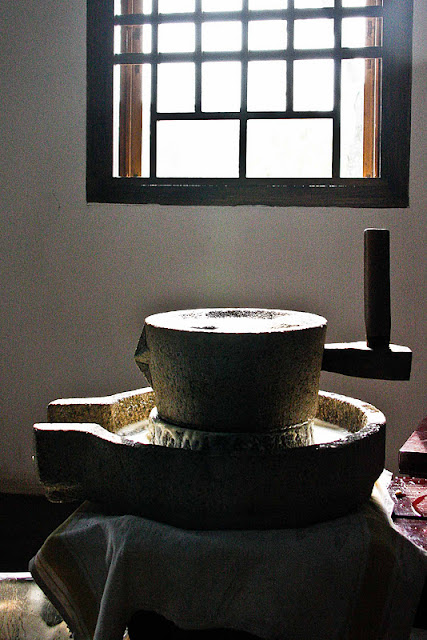 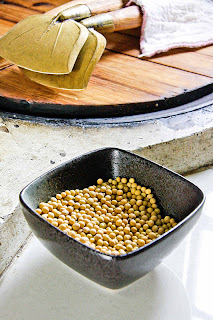 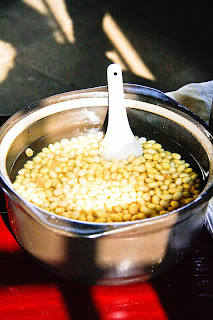 Ah Ping brings me two bowls of soybeans, before and after soaking. Before soaking the soybeans are small, hard and yellow, but after an overnight soaking in water they have quadrupled in size and softened. 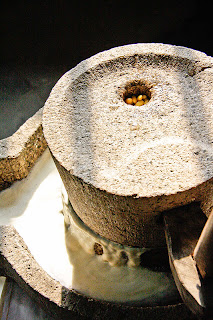 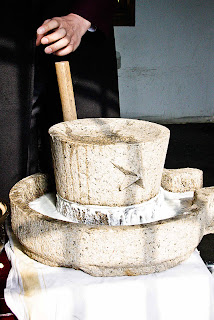 She places a spoonful of soy beans into the hole on top of the grinder, using the blunt end of a chopstick to push them down and begins to grind, adding a little water now and then when the liquid soy milk looks too thick. When the hole is empty she adds another spoonful of beans and some more water. The thick soy milk oozes between the two grinding stones and runs down into the trough, and after ten minutes of grinding we have a litre of cream-coloured milk. As for the optimal grinding speed? 'Not too fast, not too slow' she says, with a smile. 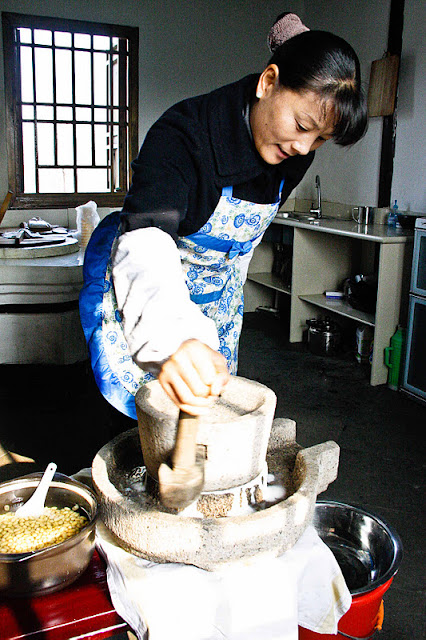 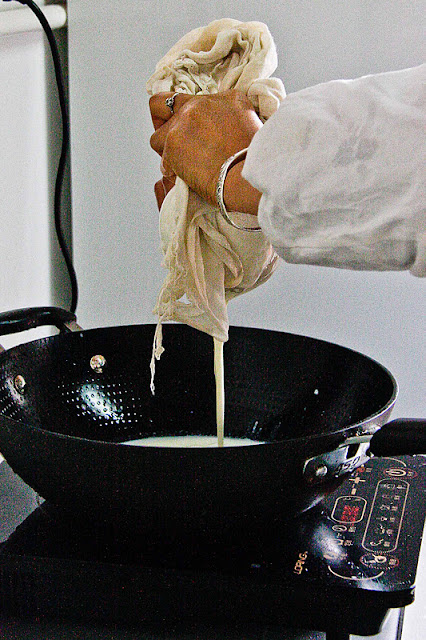 After grinding, the creamy milk is poured through a muslin cloth into a clean wok, and the muslin twisted and squeezed to get every last bit of the milk. The remaining bean grindings can be used to cook other dishes including a type of cake, Ah Ping tells me. Once strained, the milk is heated to simmer point for a few minutes, and the inedible froth skimmed from the surface and discarded. In this process the unhelpful protease inhibitor enzymes in the soy milk are inactivated and removed. 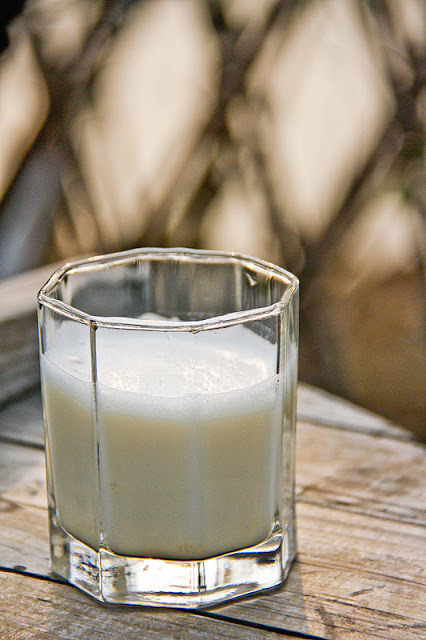 The result? Like milk of any kind it tastes better and stronger when it's fresh. Served hot, plain or sweetened, it has a creamy texture and a light nutty taste with grassy overtones. I've taken the glass outside to sit in the winter sunshine, warming my hands as I sip. Ah Ping pokes her head out of the window. 'Tastes different to the soy mik in Shanghai, doesn't it?' she asks. 'You have to make it fresh to get the best taste.' I agree with her, and decide I'm going to invest in a soy milk machine in the next week or two, because I have a grandiose plan to try making my own tofu. Now that would be an achievement.


Yangcheng Lake can be reached by taking the fast train from Hongqiao Station, Shanghai to Kunshan South Station (17 minutes at 300km/h, trains run several times every hour). Ah Ping's house is part of the organic farm owned and run by the Fairmont Hotel, Yangcheng Lake. You can visit for a lesson in soy milk making (50 yuan, including 500ml of organic soy milk) or to taste and buy honey. By arrangement, Ah Ping also hosts cooking classes and lunches using the farm's own organic vegetables.