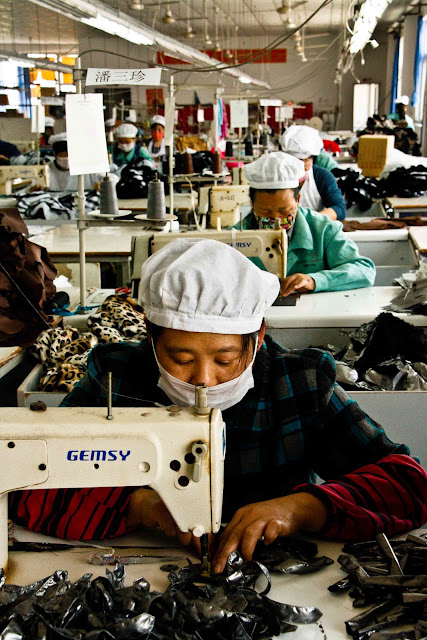 After every trip away Shanghai feels more and more like home to me, and it was really nice, after more than three weeks of roughing it, to get back to a comfortable bed and a cupboard full of exciting food items like English Breakfast tea and cereal. Shanghai suddenly seems so cosmopolitan, with its coffee shops and jazz bars and twenty-eight branches of Zara and Uniqlo.
But it's also hard to come back from the high of a holiday seeing interesting things everyday and get back in the groove of taking photos for the blog, because after all, no-one in Shanghai is wearing ethnic dress or blow-torching a pig's head. (At least, not today.) I was very lucky then, after I got back from my travels this week to hit the ground running with a factory visit arranged by a Shanghai photography group. It was my first trip with them and they get to visit and photograph some amazing places.  This time, one of the group's members had access to a clothing factory on Shanghai's outskirts. 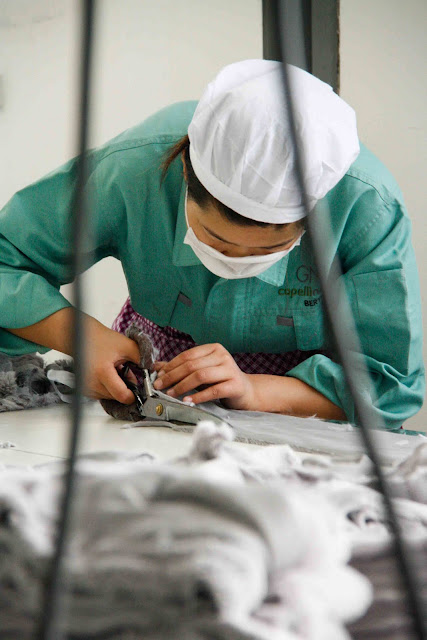 The factory produces clothing samples, items shipped to clothing agents round the world before being ordered in their thousands, or hundreds of thousands. They specialise in hats, socks, gloves and mittens - the hats are fluffy, fur-lined mountaineer style hats with ear flaps, or, for kids, animal-style with fake ears, or with long tails of pompoms. Tody there is a big order of furry leopard hats for kids being processed. In the cutting room the hat's pattern is chalked on to the fake fur before being cut out. Only the prototypes are cut by hand, once the style is finalized machines speed up the process by cutting dozens of pieces at once. 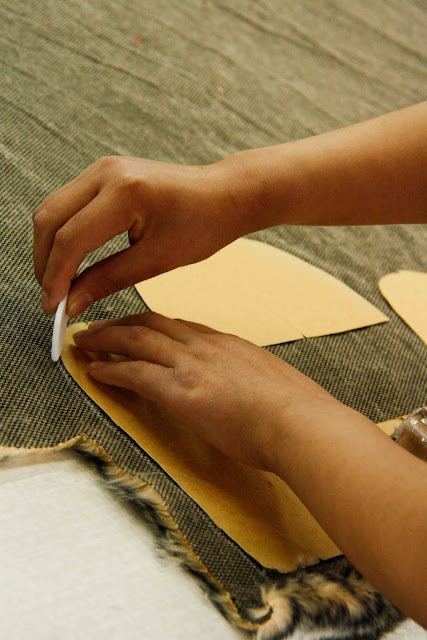 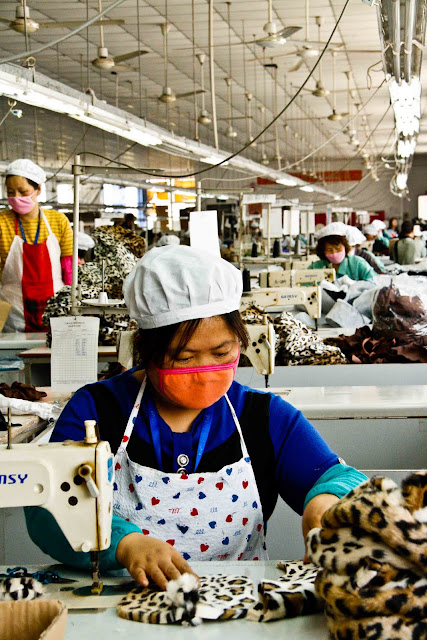 Upstairs in the sewing room, there is leopard fur everywhere, and the seamstresses wear masks to protect them from inhaling fur fibres. Expecting more cramped and noisy conditions I'm surprised by how quiet the workplace is, and how large, airy and well-ventilated. There's no getting away from the fact that this is dull and repetitive work though. Each seamstress works on a single task, over, and over, and over. One spends her whole time making small curved leopard ears to be sewn onto the top of the hats. She sews a string of a hundred or so, then turns them all inside out and passes them to he next worker who will attach them to the hat. 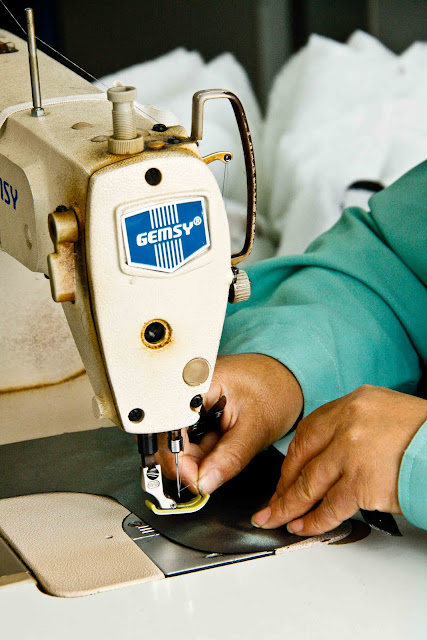 In the next room it's all black and silver caps. 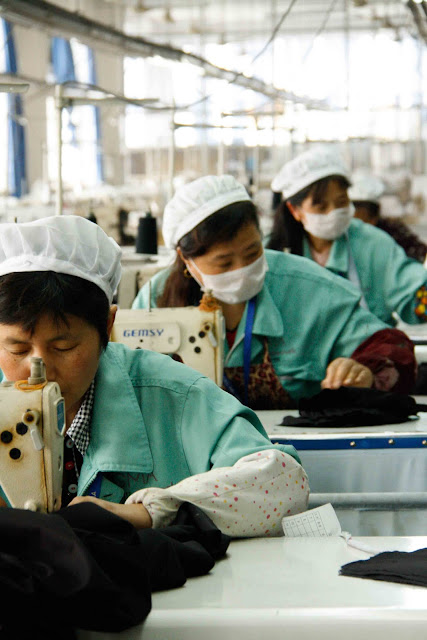 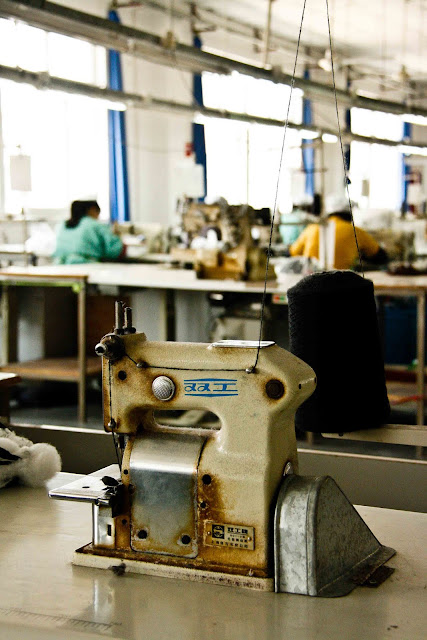 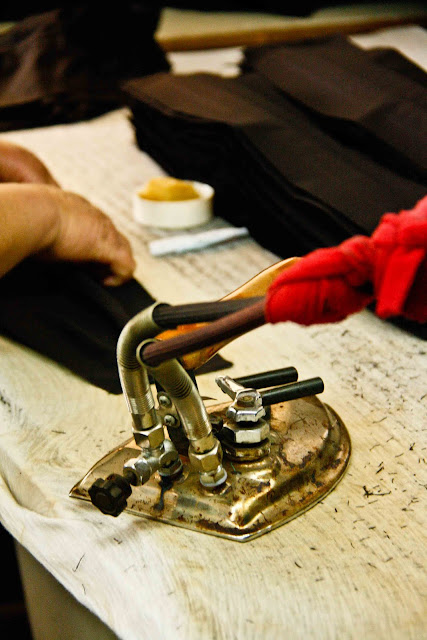 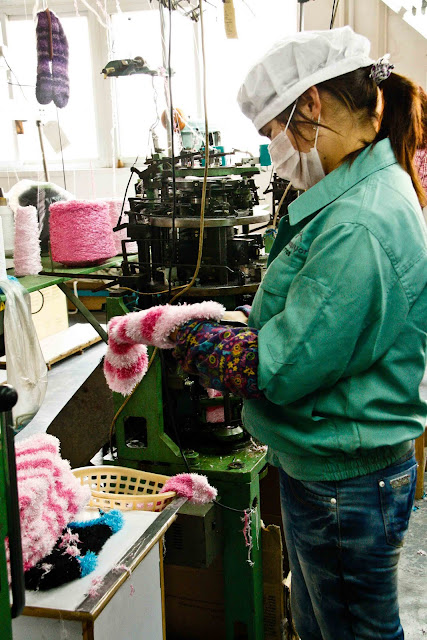 Downstairs are the sock machines, the most extraordinary things I've ever seen. Rows and rows of buzzing whizzing vertical knitting machines, all capped with a big perspex bubble where a sock is being brought into existence in mid-air, one at a time. The workers load them up with giant spools of thread and coloured wool, programme a panel of backlit buttons, then after five minutes of quiet and determined whirring, the spools spinning at great speed, a fully formed striped fluffy pink sock starts to appear in the bubble, stripe by programmed stripe, then finally pops out of a plastic tube at the side of the machine into a tub. Like some kind of crazy sock incubator, I kept thinking about the room full of pods incubating aliens in Alien, the movie, but these were all incubating fluffy fluorescent socks.
We should have been madly photographing, but there we all were, cameras at our sides, struck dumb by how socks are made. 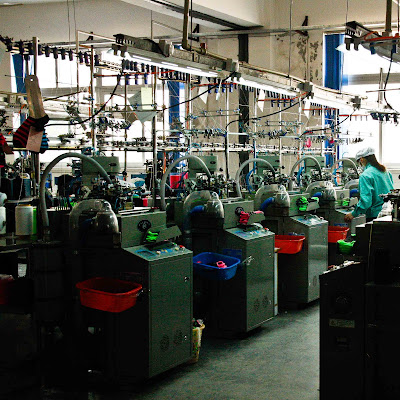 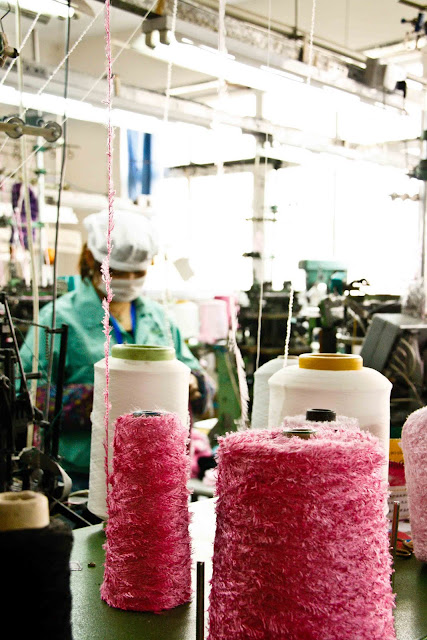 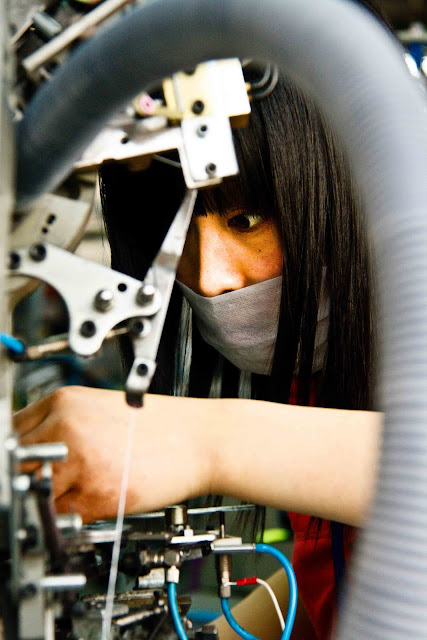 Every now and then one of the feathery fluffy threads would snap, and with a sigh, a worker would lift the perspex bubble and rethread down into the innards of the machine to get it going again. I can honestly say up until now I have never given the making of socks a single, solitary thought. Who knew it would be so fascinating and  so very, highly, technical?? 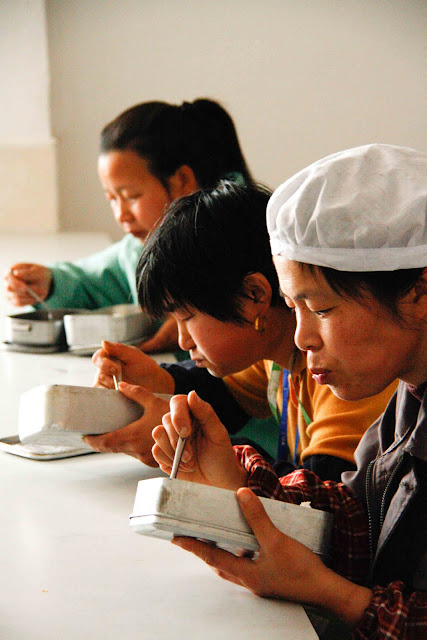 I paid a visit to the canteen, a big plain room in an adjacent building. Nearly everyone was eating their own food, so perhaps the cateen food wasn't all that appetising, or perhaps it was to save money, likely both. Unlike the workroom, the lunchroom was noisy and boisterous, and full of chat and jokes. 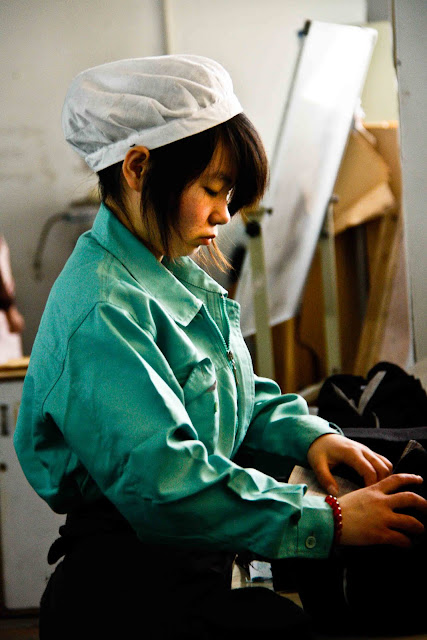 Back in the factory, I wondered if it had been sanitised for our visit? There were no signs of this, certainly nothing had the appearance of being hurriedly tidied up to put on a good show, and there were no areas off-limits to us. Perhaps we just got permission to visit the 'right' factory, but I've seen the inside of a few factories now, and what has struck me about all of them is how unlike sweatshops they all are. Once again, our preconceptions of what really goes on in China are being challenged.

Do dirty, dangerous workplaces exist in China? Of course they do, in droves, but increasingly Chinese workers have clean, relatively safe workplaces and standards are on the improve. By our yardstick, the pay is poor, but increasingly reports are being heard of workers demanding, and getting, pay increases; or of factory bosses forced to offer higher wages to attract sufficient workers. I guess the bottom line is that factory work is menial and poorly paid wherever you are in the world, and while we keep buying cute leopard fur hats for our kids, someone, somewhere, is making them.

It was a fascinating insight, food for thought, and I'll certainly never look at a sock the same way again.... 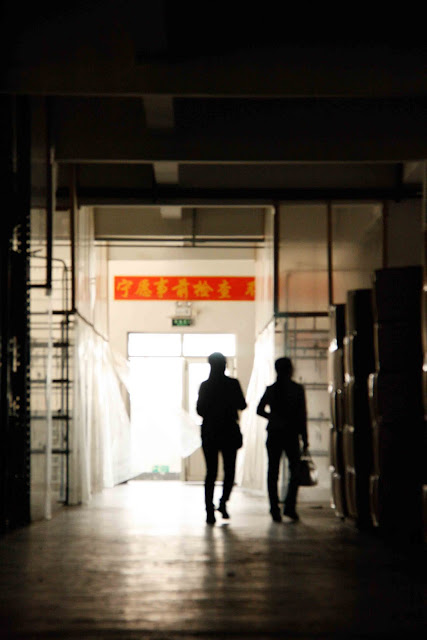