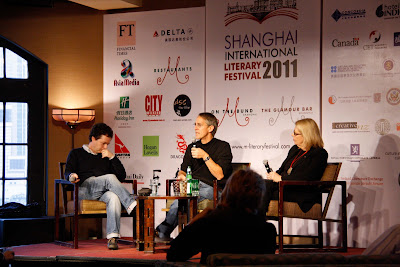 How do you alienate a room full of about a hundred bloggers? Start off by saying 'Actually, I never read any blogs except my own'. Smart. Polite laughter.


So began the opening night event of the Shanghai International Literary Festival with a panel discussion titled 'The Bloggerati', featuring three prominent bloggers: Jeffrey Wasserstrom of  The China Beat , a writer and professor of history; Anne Summers of The Looking Glass,well-known to Australian readers as a feminist, but not a blogger, (she does have a Facebook page though, as she kept reminding us all); and thirdly American journalist Adam Minter, whose blog about China, Shanghaiscrap, is both interesting and accessible.

As someone pointed out to Minter a few days after he published his first post back in 2007, they thought his blog's title was  'Shanghai is crap', leaving him wishing that the title was a deliberate cleverness on his part, but sadly wasn't. He talks a lot about recycling, and he's running a great series in The Atlantic about the international recycling business. It's fascinating, and well worth a look.


Minter also had an interesting take on 'the death of blogging', which he thought was no more than a vicious rumour, with millions more blogs now than ever before, and people spending more hours reading online than ever before.


I'm afraid I found Summers and Wasserstrom less interesting panelists than Minter with nothing new to say about blogging, and in particular about blogging in China. But I needn't worry about offending them with my comments, because by their own admission, they won't be reading them.


The 9th annual Shanghai International Literary Festival, known as SILF to literary types, began yesterday and runs until March 20 at M on the Bund. Here are some events I thought looked interesting, if you're in Shanghai over the next two weeks and feel like being highbrow. Tickets are 65 yuan per session, including a drink. (Full programme here)