To Ancient Xi'an By Train 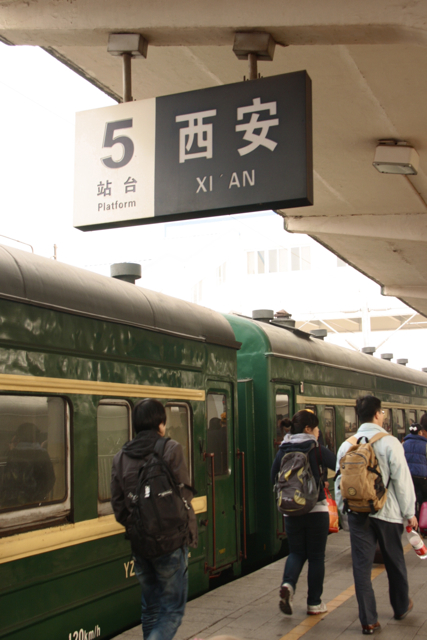 Last night I went to sleep in Shanghai, and woke up this morning in far-off Shaanxi province, the ancient cradle of the Chinese dynasties and the capital Xi'an. I took the Z train, rocked to sleep all the way by the lull and roll of the wheels on the tracks. This is a trip I've been trying to do for a year, but at last I will see Xian, the capital of Shaanxi, and the home of the famed terracotta warriors. And just as famed, the street food. I'm not sure which I'm more excited about.

I seem to be doing a lot of train travel lately, and to be honest, for this trip the pressure was on to go by air - a mere two and a half hours. But planes in China are unreliable, persistently delayed, and they pick you up and put you down without any concept of the shift in the landsape between A and B. I'm all for speed when time is short, but if I have the time, I enjoy the hours on the train, watching the slow transitions in the houses, fields and crops. I feel like this kind of rail travel may just be dying out, as the old trains are gradually repleced with faster and faster machines, and I should enjoy it as often as I can.

We left Shanghai in darkness, with the neon brightness of the city gradually thinning out then fading altogether. I had a little paper cup of red wine, sitting on the lower berth of our four bunk compartment, then climbed into my narrow upper bunk, pulled the white cotton-covered silk quilt up to my chin, and fell instantly asleep. Hours later, as the dark night lifted into early dawn, we passed through a landscape completely new to my eyes, and such a stark contrast to the lush, green rice and lotus paddies of south-east China where I have travelled before. Dry, brown, and ancient-looking, the villages here lie under cliffs of red earth, the houses either carved into the cliff-face, or hidden behind tall, red-brick walls with imposing stone gateways, opening onto sunny courtyards and humble low-set buildings. Golden yellow corn is laid out to dry on each flat roof, and the last of the dark orange persimmons are hanging on the trees.
This feels like an altogether different China, and it is, part of the mid-west Loess Plateau formed by the dust of far-off Siberia and neighbouring Mongolia, blown through millennia of duststorms and deposited here in Shaanxi. The Silk Road began here too, from this ancient and important capital, heading westward through central asia to Europe.

As I step out of Xi'an's crowded train station, battling through the crowds and the taxi touts, I see the old city walls rising impressively in front of me. I can feel the history.