For months I have had 10 Shanghai World Expo tickets sitting in my drawer, unused. You know I was never really looking forward to Expo, both for the disruption it caused before it began and the way I thought the site would be run, and there always seemed to be a good reason not to go - it was too hot, it was the weekend, it was too daunting to battle the crowds. Busy days were seeing more than 600,000 people, with queues of up to 8 hours for the most popular pavilions. Oh God, I thought, I can't bear to go into a place even more crowded than the streets of Shanghai.

But I finally did it. No more excuses. It's only open for the next 18 days, so it was now or never.

The first thing to tackle was the entry queues. But where the heck was everybody?

As it turns out, they were already inside, queueing for the German Pavilion, the Swiss Pavilion (with a chairlift!), the Belgian Pavilion (with free chocolate!) and the UK Pavilion. For three hours at a time.

Standing forlornly wondering where to go first on a site about the same size as LAX, including all the runways, we realised the Expo parade was about to start right in front of us! So that was the first sight we saw, and I have to say it doesn't get any weirder. Imagine a Disney style parade with canned music, floats, and cheesy costumes, and ramp it up to eleven. Then totally Chinese-ify it. Have Chinese whirling dervishes, Chinese American Indians (in cut-off denim fringed shorts!) and Chinese Africans. 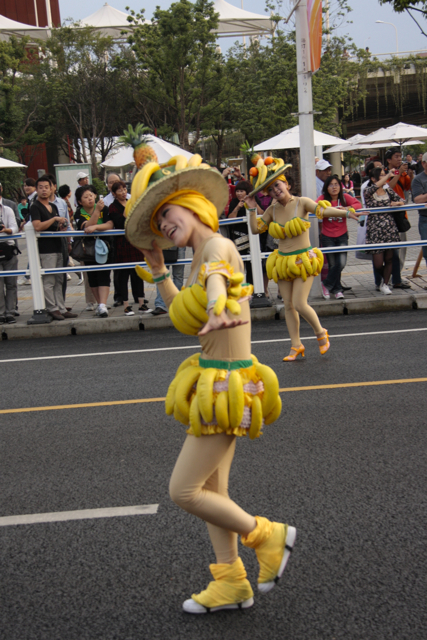 For good measure, add dancing Chinese bananas, a Chinese Uncle Sam, and finally, a host of dancing Chinese cactuses playing the guitar. If I didn't live here, it would have made no sense whatsoever. But it sure had a lot of COLOUR and plenty of DANCING. 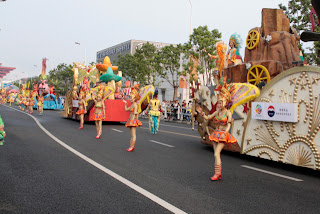 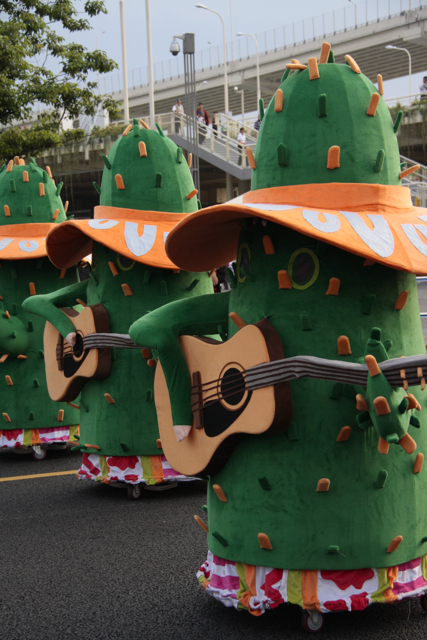 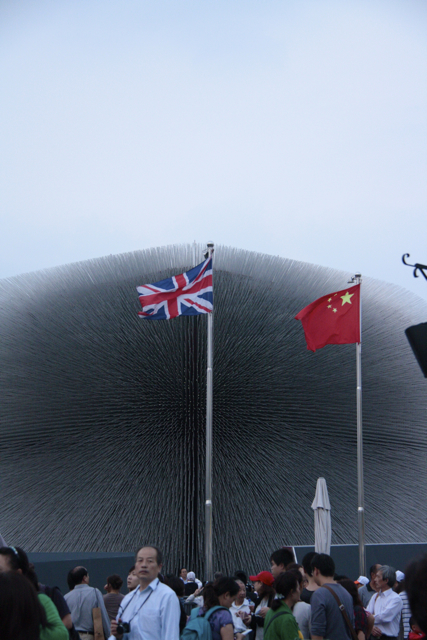 After all that excitement, it was time to see some pavilions. Only we couldn't get into any except Australia, and that was only because we took our passports with us. And would I queue up to see it ? No....(where is my patriotism??)
Anyway, I've heard many of the pavilions are just as good from the outside. Spain (above left) is covered with woven wicker panels,  Russia (centre) is like a snowflake lit from within, and the Netherlands (above right) is a higgledy-piggledy house of the imagination. The UK pavilion, also known as The Seed Cathedral, has 60,000 perspex rods, the tip of each embedded with seeds sourced from all over the world. This pavilion alone is worth every cent of the entry price (160 yuan). It's astounding.
Instead of queueing, we embarked on an international food tour of the Expo site. The restaurants and cafes can be freely entered at any time, so we tried meat pies and lamingtons at Australia, Dutch frites and beer at the Netherlands, Canadian waffles drenched in maple syrup, and ice-cream at the UN. This was the most fun for me, and next visit I'll try some Turkish food and Thai food. 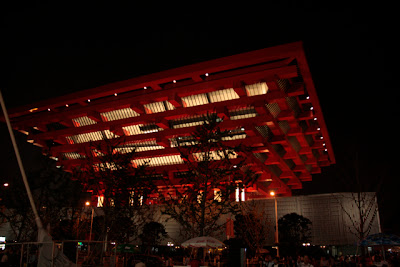 As the night drew on, we dragged our weary selves to the centrepiece of the Expo site, the China Pavilion. It is absolutely impressive from without, and the inside I can only imagine - because I'm unlikely to ever see it. The only way to get in is with a special Reserved Ticket, and the only way to get one of these is to start queueing at 5am, to be first in line to sprint through the entry gates at 9am and crash tackle one of the volunteers giving out the day's quota of reserved tickets. All gone by 9.01am.

Of course, if you want to pay between 200 and 800 yuan to jump the queue you can 'purchase' a 'VIP Ticket'. We're not living in a democracy after all - this is China, land of the entrepreneur.

So will I go back? Good question, but in the end I'll have to - I've still got seven tickets to get through.