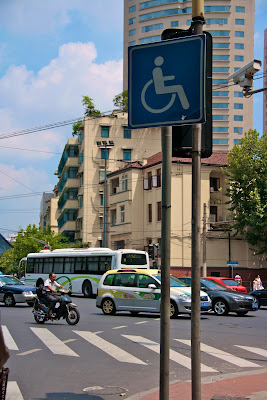 It's great to be back! Sure, it's a pain having to shower five times a day to keep that sweaty, dusty, grimy feeling under control, and it's melting outside, but I stepped out the door and thought 'Wow! What a great place to live! The people! All 20 million of them! The unusual blue sky!'
I was clearly having some kind of Shanghai honeymoon period, which came abruptly to an end when I got knocked over by an angry Chinese woman on a motor scooter in the middle of a pedestrian crossing. Who thought that it was my fault. Clearly it was, because I was trying to cross the pedestrian crossing on foot, instead of in a wheelchair as indicated by the sign. At least I had the presence of mind to tell her off in Chinese, which nearly made her fall over. As if hitting a foreigner wasn't bad luck enough but then to be told off in your own language? Unbelievable.
I got into the next available taxi, rubbed the tyre marks off my legs, and resolved to pull myself together and enjoy the fact I wasn't in hospital. You know I love Shanghai taxi drivers and this guy was no exception, with a happy disposition, severe short-sightedness, and a wide grin full of alarming looking gold fillings. I loved him forever when he said that although my pronunciation was really terrible he could understand every single thing I said. And that learning Chinese was so difficult it was amazing I could speak it at all after only a year. Bless him. At least I think that's what he said. I resolved right away to study my Chinese cusses a lot more, because they were bound to come in handy. He'd seen the whole scooter incident and he agreed it was her fault even though I wasn't in a wheelchair.
Love of the city flooding back, I ignored the four near misses we had over the next ten minutes and concentrated on getting to lunch. Lunch was great - not Chinese food unfortunately, but tapas - but that's the great thing about this place - there are cuisines from every corner of the world on offer. Don't like tapas? Walk next door and have Sichuan, or French, Uighur or Persian food. Food heaven.
Walking home later past a typical Shanghai fruit shop I was loving the wonderful colours and variety of everything on display - the lychees, the peaches, the big, ripe mangoes. The fruit was displayed with so much care - all the pyramids of grapes just so, all the watermelons piled in neat rows and the peaches rolled so that the blush side was up. Just as I was admiring the sheer wonderfulness of it all I noticed the shop girl in a corner, sitting on a low stool and plucking out her long underarm hairs one by one, then absentmindedly dropping them on the lychees. Ah, Shanghai. I love you, warts and all.