Shanghai to Guilin by Slow Train 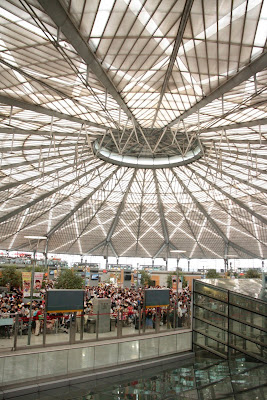 For the next two weeks we're travelling to Guilin, in China's South. Internet being what it is in rural China, my posts may be more sporadic than usual, so thank you ahead of time for your patience. We'll be visiting the famous karst peaks of Guangxi Province, the Dragon's Backbone rice terraces and tiny farming villages. Enjoy the trip!


The journey begins at Shanghai South Railway Station, and heads south west, and back in time. Shanghai South is a beautiful modern architectural masterpiece compared with its North Shanghai counterpart. We drag our bags through perfunctory security checks, then marvel at the immense circular roof, fortressed like a giant star looking over the thousands of travellers below waiting for their trains. I spot a river a people surging towards a platform whose train has just arrived. There are thousands of people. Then I realize that it’s my train they are moving towards. 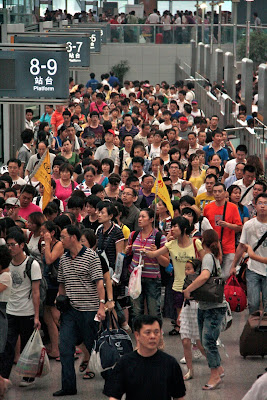 From the moment we step into our carriage I feel like I’m back in travel's golden age. We have a soft sleeper compartment. I don’t know that the soft part refers specifically to the bed, but your journey will certainly be softer. Our compartment has two upper and two lower berths, all with cream satin damask coverlets and embroidered anti-macassars for our heads. There is a small white damask covered table, for eating, drinking tea, or playing mahjong, and a large thermos for hot water for tea or noodles. Each berth has its own little lamp with an old fashioned silver toggle switch, and I spend a while just switching it off and on, off and on, for the sheer enjoyment. Each bed is also equipped with a blue velvet covered coathanger hung at its foot, and a China Rail standard issue silk quilt. On the floor is an ornate red patterned carpet and four pairs of blue plastic slippers, for padding about in. This trip will take 23 hours, and has cost $85. 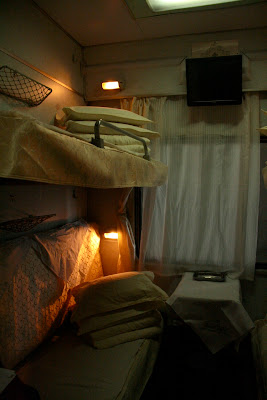 When I see the bathrooms, I understand why the slippers will come in handy. They are as industrial as the compartments are ornate. Two plates of stainless steel tread plate mark the position for squatting, over a hole which leads direct to the tracks below. Obviously $85 doesn't get you everything.

We pull out of Shanghai and I make a cup of tea, sipping it as the outer suburbs of Shanghai make way for five minutes of farmland before the outer suburbs of our first stop, Jiaxing, appear. For the next three hours I come to understand more about the accelerated Industrial Revolution China is undergoing than I could have learned in three years in Shanghai. Everywhere I look are huge piles of slag, sand ready for concrete, tonnes of bricks, steel re-inforcing rods, welding, hammering and building, building, building. Apartment blocks, roads, pipelines, office towers, factories, factories, factories. Huge lights illuminate the night workers laying a new high speed rail line. Off duty workers lounge shirtless in the heat in makeshift tents by the edge of their worksite. Some wash from a small plastic bowl, some sleep out in the open. Activity is everywhere. It’s as if China is literally racing to catch up after years of much slower progress.

As darkness falls the frenetic activity starts to thin, then eventually the first prolonged tract of farmland – we have entered China's rice bowl, and rice fields are interspersed with lotus fields. Rice, lotus, rice lotus. I nod off to sleep, only to be wakened by a bright light shining in my window - it's actually just the moon, and I lie awake watching it reflected in the rice paddies and ponds. Through the night we make several stops, each one breaking the journey by just a few minutes. Few get on or off. I go back to sleep. 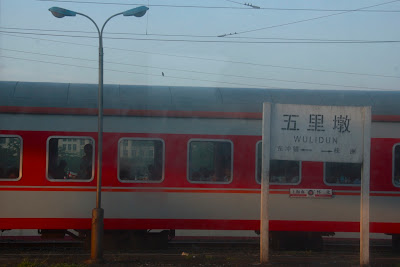 In the early light of dawn we stop for half an hour at Wulidun, along with three other long-distance trains. Everyone looks tired, and in the hard seat compartment of the train opposite I can see exhausted travellers asleep on their tables. They are going in the opposite direction, and have come from Nanning, near Vietnam's border. We pull away through smaller and smaller villages and tiny farms. The farmers are already at work at six in the morning, tending to the rice, the corn and beans they are growing.

Around midday our packed food runs out, and we resort to eating the cardboard-boxed food from the train canteen. It doesn't disappoint. A hideous mixture of knuckle, bone, gristle and cabbage, with a fried egg on top, with rice. I eat the egg and rice and give up on the gristle-knuckle mixture after picking up a piece that looks like a fingernail. Because most of our stops were during the night we hadn't yet figured out the train's food system - during the five minute stops you must leap out on to the platform and buy from the noodle vendors who waits there. There are no interesting food vendors plying the carriages like trains in other parts of Asia, and no snack trolley. Never mind. The first limestone karst peaks appear and I know we are close to Guilin. The entire landscape is a bright subtropical green and there are now banana palms and lychee trees between the rice fields. We pull into Guilin station mid-afternoon.

As we leave our carriage the heat hits us like a wall, dense and heavy. The sound of crickets and cicadas fills the air with a loud throng, almost as loud as the taxi touts at the exit gate looking for business. Welcome to Guilin. 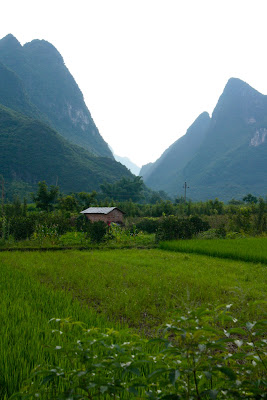