Shanghai Taxi Drivers, I Love You! 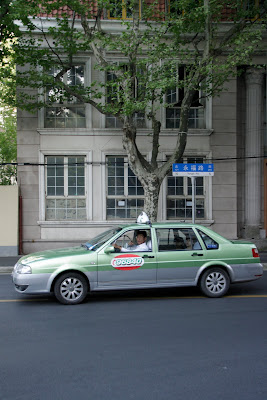 I never really liked Shanghai taxi drivers that much. They spit out the window, they have grubby uniforms and grubbier cabs, and occasionally they get out of the cab to take a slash against the front wheel. While you're sitting in the front passenger seat.

Compared with Beijing taxi drivers however, I now know that I simply didn't realise how much I love my Shanghai taxi drivers. It's as if I was blind to their charms because they were always right under my nose. Or up my nose. Whatever. I don't want to start any kind of turf war here, but these are the facts. As I see them.
1. Shanghai taxi drivers use the lines painted on the road as a form of decoration. They are not, at any time, to be driven between. You will find, as I do, that this makes for a much more interesting taxi ride. In Beijing, everything is very orderly and frankly quite boring.
2. Despite their artistry with the roadways, Shanghai taxi drivers never get creative with the meter. In Beijing, they will try and rip you off hell west and crooked. Look out.
3. In Shanghai, if you need a taxi, just step out from the curb and raise your arm to waist height. Now flap your hand vigorously. A taxi will stop. In Beijing, the only way to get a taxi is to hijack one at traffic lights, climb in and refuse to get out.
4. Beijing taxi drivers hardly ever use their horn. What's that all about? When I'm travelling in a taxi I like every other vehicle, pedestrian and small animal to know that I'm there.


I like the full audio experience that Beijing taxi drivers cannot offer.
5. Shanghai taxi drivers UNDERSTAND me. Not in a deep personal sense, but in a 'shemme lu?' (tr. 'where are you off to fair lady?') kind of way. What language do they speak in Beijing taxis??? It sounds like grunting whilst eating a plum, and it's definitely not mandarin.


(Can you tell I'm glad to be back in Shanghai?)