Shanghai Expo Starts in One Week! Oh no! 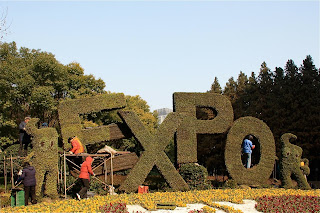 Shanghai International Expo begins in exactly a week. I haven't been ignoring it, it's just more like a state of denial. Expo has become such a pervasive influence on my daily life, I kind of hate it before it's even started. The endless Expo topiary, building construction, roadworks, repainting and disruption has gone on so long it's become part of the fabric of Shanghai life for me. And now it's nearly here.

Like Beijing before the Olympics, the city has undergone a massive 'clean-up' both literally and, well, 'morally'. Here's how I see it, from a 'small-fry' man on the street perspective:
1. All pirate DVD shops are now closed. For foreigners like me, these shops are a lifeline of current release movies and old favourites unavailable elsewhere. Except, of course, that they're not really closed. Last week I walked past a regular haunt, it was shut, padlocked, windows completely curtained. And then a familiar face appeared from a doorway and said "need some DVDs?" I felt like a crack addict looking for my next high. Furtive phone calls were made, then a guy with some keys appeared and opened the padlocked doors. He turned on the lights and inside, all was exactly as it had been before. Including all the up-to-date new releases for 10 kuai each. And then we were locked inside by the guy with the keys, from the outside. Now I really felt like a drug addict. I chose my DVDs (Crazy Heart, first season of Glee, District 9), paid, then after several more furtive phone calls we were unlocked and released. Bizarre. Except that everyone's happy - the DVD guy, the police, the customers, and even better, it looks like there's been a major crackdown. Perfect.
2. All intersections in Shanghai will now obey Shanghai Official Traffic Rules. Previously, intersections were a confused tangle of cars, bikes, motorbikes, trucks and buses, all honking their horns and driving on the wrong side of the road. Traffic lights, particularly red ones, were regarded as an advisement only. But everyone knew the unwritten rules,and so it all ran quite smoothly. For example, taxis always go through red lights but honk their horns as they do so, to let everyone move out of the way. Buses stop for nothing and no-one, not even police. Pedestrians and cyclists know that zebra crossings are meaningless. And scooter drivers always drive on the wrong side, whilst smoking a cigarette and talking on their mobile phones. These are the rules.
Now, all intersections are patrolled by two policemen and four traffic guards, plus or minus four Expo volunteers with small red flags and fluorescent armbands. Now everyone will be made to observe the road rules as they are written down.
And the result? Chaos. Everyone is totally confused. What are those red light for? Are you serious officer? I have to actually stop and wait?? Intersections have become places where policemen argue with scooter riders all day about why they can't get around a red light by driving on the footpath. And the poor pedestrians, accustomed to crossing when there is a break in the traffic, are being held back at corners until the little green Walk man appears. Emotions are running high.


3. Whenever I go on the subway, I have to pass through a security check, including a bag X-ray. A friend had a highly dangerous bottle of red glitter nail-polish confiscated, yet another walked through with a recently purchased kitchen cleaver, unstopped. Perhaps there's a gang of nail-polish wielding graffiti artists roaming the subway painting small but subversive slogans on the walls. Who knows?


4. On a positive note, there are now five thousand Expo taxis. They're clean, they're cute, and they have seatbelts in the back seats. All the rest of Shanghai's taxis have no seatbelts in the back seats, although sometimes there is a seatbelt but nothing to plug it into, or a plug but no seatbelt. Intriguing. Of course, in the Expo taxis, you don't have to actually buckle up. It's not illegal to not wear a seatbelt. But they're there. And they look good to foreign visitors, even if nobody actually uses them. And that's what counts.


I'll be in Beijing for the next few days. Catch up soon on all the news from the North.