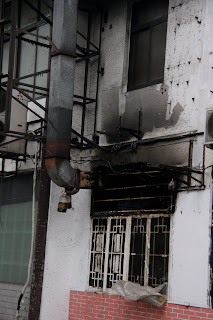 The Chinese are great recyclers and they put us to shame in many respects. But sometimes there has to come a point where recycling goes too far. This week I was out walking and was drawn to a lively and  packed Chinese restaurant. Everyone inside looked like they were enjoying themselves, certainly, they were all eating. I was starving, and was about to walk in when I noticed the adjoining kitchen, above.

Through the grimy windows and smoke blackened walls I could see five cooks crammed into a space the size of a bathroom. Steam billowed out through the windows whenever the lid was taken off a big pot, and the roar of four wok burners going full bore all at once could be heard above the din of orders being shouted by the waitresses.


Then the extractor fan pipe caught my eye. Coming directly out from the kitchen wall, it was covered in a patina of grease and dirt. Hanging from it, if you look carefully below, were two plastic bottles positioned to catch all the cooking oil as it condensed along the inside of the pipe. Now, you might say that this was just to prevent the pipe from getting blocked, and was going to be thrown out later. But I've seen and heard enough in Shanghai's backstreets to know that this cooking oil was going right back where it came from - the kitchen.


Oil recycling, albeit not like this, is apparently common in Chinese restaurants - big restaurants sell used oil to small restaurants, who use it again and on-sell it to ever smaller restaurants. At the bottom of the food chain, literally, are the myriad street stalls who make some of the tastiest food in town. Rumour has it that even congealed oil from inside street grease-traps is retrieved, heated, strained and resold. I'm both disgusted and fascinated by this - on the one hand, it's totally revolting, on the other, oil is heated to 240 degrees for deep frying, which should be hot enough to kill anything really, even cockroaches. 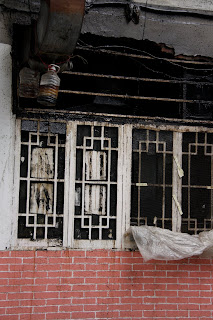